Sapphire and Steel, Assignments One to Four 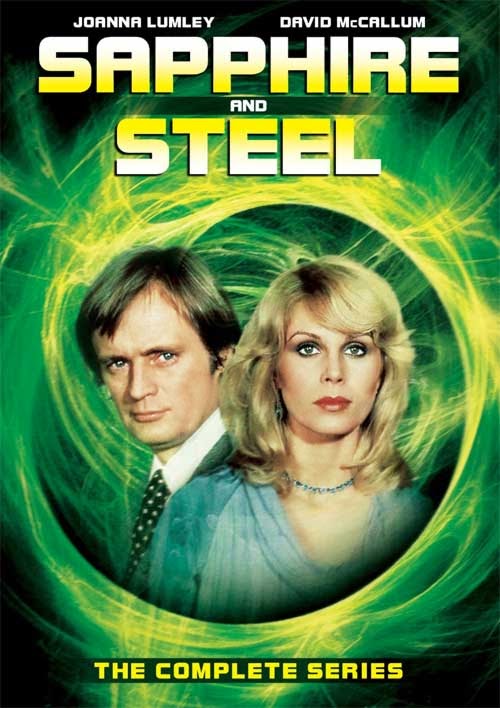 Sapphire and Steel is one of the oddest but most interesting of British science fiction series of its era. It was produced by ATV and was broadcast, rather sporadically, from 1979 to 1982.

The series was created by P. J. Hammond who has had an interesting career as a television writer, his credits including episodes of police procedural series such as Z Cars and The Sweeney and science fiction series like Ace of Wands. More recently he has written for Midsomer Murders and Torchwood. Hammond’s original idea was for a children’s series, which probably explains the format - each story was broadcast as a series of from four to six half-hour episodes, in the manner of Doctor Who. At some stage the decision was made to do Sapphire and Steel as a fully fledged science fiction series for an adult audience with a distinctly darker tone.

The two leads were both major television stars, David McCallum having achieved fame with The Man From U.N.C.L.E. in the 60s and Joanna Lumley having starred in The New Avengers in the mid-70s.

The two central characters, Sapphire (Lumley) and Steel (McCallum), are space-time trouble-shooters, their job being to locate and neutralise time anomalies. Time is conceived of as being somewhat unstable, and the instabilities are highly dangerous. Sapphire and Steel look human but are in fact aliens. They can be thought of as being vaguely similar to the Doctor Who concept of Time Lords but with some important differences. Their primary job is to safeguard time and to prevent the past from breaking through into the present. Saving any humans who are threatened by time anomalies is a secondary consideration. They do try to save humans in such cases but it’s clear that neutralising problems in time is a far more important consideration, such problems having the potential to do so much harm that the survival of a few humans is of rather lesser importance.

That’s one of the most interesting elements of the series - Sapphire and Steel are not the caring sharing Doctor Who type of aliens. They regard humans with a certain detachment, and at times even as something of a hindrance. This is particularly true of Steel who is a long way from the traditional science fiction hero. He is, for the most part, cold and emotionless. Sapphire has more empathy for humans but for her as well the job comes first. They are distinctly ambiguous and not always entirely sympathetic heroes. 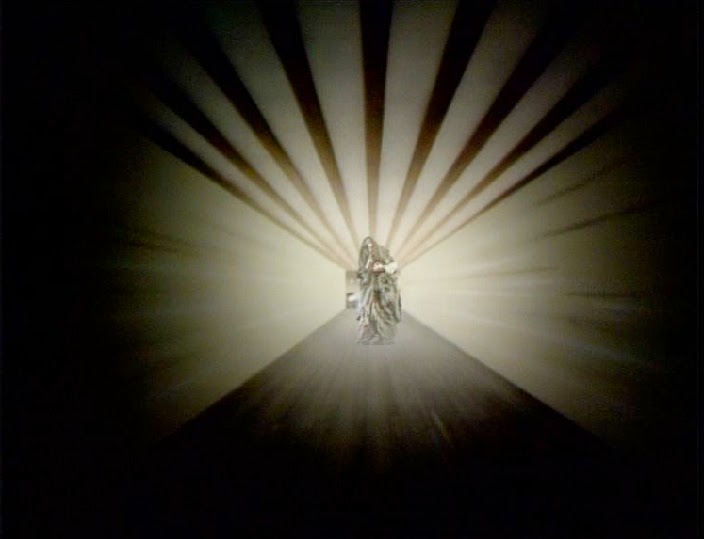 P. J. Hammond wrote five of the six stories in the series. These are stories involving time that are far more complex and disturbing than those to be found in series like The Time Tunnel. The dangerous time anomalies often result from situations in which people have inadvertently created temporal confusion. In Assignment One the problems arise in a house that is filled with too many elements from the past, and elements from too many time periods. The house was built 250 years ago on the foundations of buildings of an earlier era and the couple who inhabit the house with their two children have filled it with old objects such as furniture and (most dangerously) clocks. Even worse the wife has a great enthusiasm for old nursery rhymes many of which have associations with historical events. Time is a kind of corridor inhabited by creatures (which appear to people as ghosts) that are trying to break out of the corridor into the present. These creatures can use old paintings, old books or old nursery rhymes as triggers to break out of the time corridor.

A recurrent theme is that it is extremely hazardous to mix different time periods. For example a house built in the 17th century containing pictures painted in the 18th century, furniture built in the 19th century and various everyday objects from various decades of the 20th century would be a kind of (quite literal) time bomb. It would contain a multitude of triggers any one of which could cause potentially catastrophic space-time disruptions.

The idea of ghosts as reflections of time is intriguing. Hammond’s initial inspiration came from spending a night in a supposedly haunted house and he has managed to take the traditional English ghost story and give it a clever science fictional twist whilst still retaining the essential atmosphere of the ghost story. 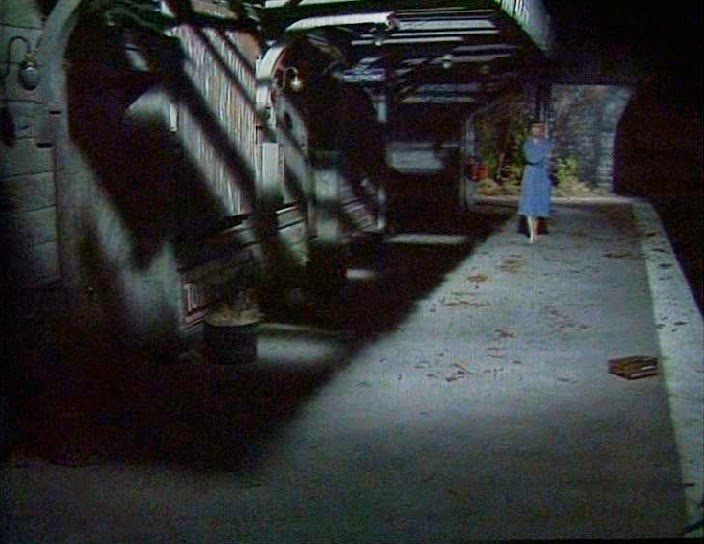 Assignment Two further amplifies Hammond’s conception of the nature of ghosts and ghostly hauntings. It also emphasises the alienness of the agenda of Sapphire and Steel - they are guardians of time, not of the human race. Compassion cannot be allowed to prejudice the success of their task.

Assignment Two makes wonderfully effective use of its setting, an abandoned railway station. With just a handful of sets it achieves an extraordinary sense of claustrophobia, melancholy and at times stark terror. It is an exceptionally clever and unconventional ghost story, of ghosts who have been cheated.

Assignment Four is a vast improvement. A ghost in this series can be a kind of echo from the past, or it can be a person (alive or dead) from another time. It can even be a figure from a photograph that is brought, not exactly to life, but to a kind of shadowy existence. This idea is explored in depth in Assignment Four. Photographs can act as a species of portal, and one of the most interesting ideas is that every photograph is a photograph of infinity. It contains not just those people and objects visible in the photograph, but everything within the frame of the picture - the people  who were behind a wall, or inside a house, or in the street behind a house in the image. There really is more to a photograph than meets the eye. 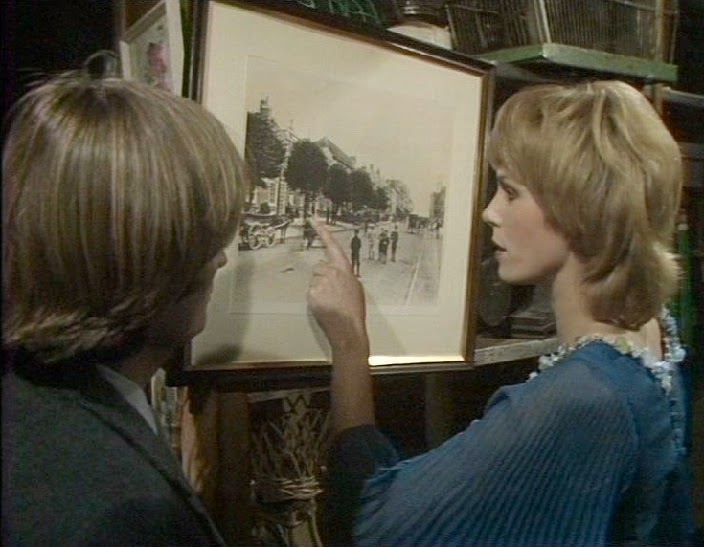 In this story an amateur photographer playing around with photographs, mixing images from different photographs into one photograph, has unknowingly opened a portal and something has entered. His big mistake was to mix images from photographs taken at different times, thus creating an extremely powerful potential time anomaly. Now figures from century-old photographs are inhabiting the present day. They are ghosts, but ghosts of living people rather than dead people.

McCallum and Lumley resist the temptation to play their characters in a traditional heroic manner. Both give nicely ambiguous performances with Lumley in particular adding some wry humour.

One of the series’ great strengths is that it doesn’t try to give tidy explanations. It’s content to leave the viewer slightly mystified, with the sense that some answers have been given but further questions have been raised that remain unanswered.

This series was made on a very small budget, a circumstance that becomes an asset rather than a liability. Being shot entirely in the studio on a very small number of sets contributes to the sense of all-pervasive unease. The lack of money for elaborate special effects necessitates attention being given to atmosphere rather than spectacle. And it achieves the right atmosphere extremely well.

Anyone who enjoys ghost stories with a science fictional twist should certainly check out this fascinating series. It’s available on DVD in Britain, Australia and the United States.