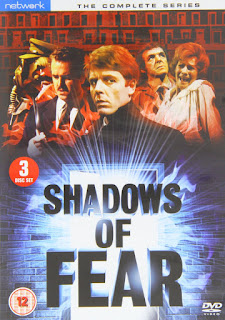 Anthology television series enjoyed a considerable vogue in the 1960s and on until the early 70s, on both British and American television. One of the least-remembered examples is Thames Television’s Shadows of Fear, broadcast intermittently from 1970 to 1973.

This series had a rather odd production history. The first episode went to air in mid-1970. It was followed by a season of nine one-hour episodes in early 1971. A two-year hiatus ensued after this and then one final half-hour episode was broadcast in early 1973. This series was apparently broadcast once and never repeated and I have been able to find virtually no background information on it.

Thames assembled some fairly formidable talent for Shadows of Fear. Four episodes were written by Roger Marshall, one of the best TV writers in the business who contributed episodes to The Avengers, Special Branch, The Sweeney and Target amongst many others as well as creating and writing the superb Public Eye series. Two episodes were penned by John Kershaw, another fine writer whose credits include stories for Special Branch, Public Eye and Callan.

Seven episodes were directed by Kim Mills who had worked on series such as The Avengers, The Mind of Mr J. G. Reeder and The Rivals of Sherlock Holmes. The acting talent includes Sheila Hancock, Ronald Hines, George Sewell, George Cole and Edward Fox. With people of that calibre involved it’s rather odd that this series fell into complete oblivion.

This series focuses on psychological horror and suspense rather than the supernatural. It’s the same sort of territory that Brian Clemens would mine in his 1973-76 Thriller series.

Did You Lock Up? was the debut episode, with a script by Roger Marshall. A successful writer, Peter Astle (Michael Craig), and his wife Moira (Gwen Watford) are burgled. It’s the sort of thing that happens all the time. It’s irritating but you get over it. Only Peter doesn’t get over it. He wants to see those burglars behind bars. The police admit they have little chance of catching them. Peter decides to have a go at catching them himself. But what will happen when he does capture them? It’s an entertaining story, fairly low-key but with a sting in the tail. 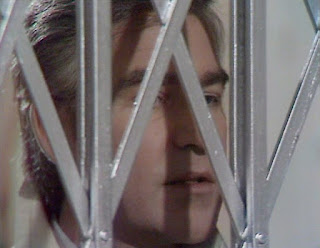 Sugar and Spice is even better. Anne Brand (Sheila Hancock) is surprised on arriving home to find that her son Michael has not returned from school. Her daughter Judy (Suzanne Togni) obviously knows where he is but has an odd tale of having promised her father not to say anything. Judy is clearly a slightly strange child. When Anne’s husband Vic (Ronald Hines) finally arrives home, very late and rather drunk, the plot begins to thicken. He had been having an affair but had told Anne is was all over and done with. Things are obviously very tense between Anne and Vic. And Michael is still not home. Anne is more and more suspicious but she’s not entirely sure what she is suspicious about. The tension builds more and more intensely. It’s not that hard to guess what has happened but it’s the unbearably tense atmosphere and the powerful performances from all three leads that make this a fine exercise in twisted suspense and psychological horror.

In At Occupier’s Risk a young woman arrives at a roadside inn in England. The proprietors, Mr and Mrs Darben, seem strangely disturbed at the prospect of a paying customer. Mr and Mrs Darben are obviously harbouring some kind of secret. There’s certainly something  hidden away in that locked room behind the kitchen but it’s not quite the secret we expect. A nicely moody episode.

The Death Watcher is quite superb. Emmy Erikson (Judy Parfitt) is a psychologist with an interest in the unusual, and even the paranormal. She is invited for the weekend to the home of Dr Pickering (John Neville), ostensibly to take part in an experiment. The problem is that Mrs Erikson is really a sceptic while Dr Pickering is very much a true believer. Mrs Erikson dismisses Pickering’s crackpot theories with scorn but discovers that participation in his experiment is not voluntary. And his theories are even more bizarre than she’d imagined. John Neville is excellent as the plausible but tragically unhinged Pickering while Victor Maddern gives a lovely underplayed performance as his assistant Dawson, a psychiatric nurse. This episode is genuinely creepy and scary with a nice touch of pathos. 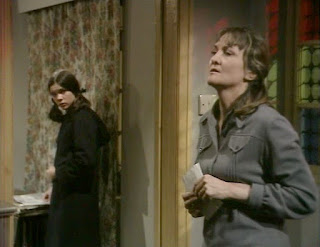 There has to be at least one dud episode and in this series it’s Repent at Leisure, by the usually reliable Roger Marshall. A wealthy middle-aged woman on a round-the-world cruise has an affair with the cabin steward. Not unusual, except that she later marries him. She’s wealthy and upper-class and he’s poor and working-class so things don’t work out. The problem is that she (being upper-class) is naturally neurotic, vicious and stupid while he (being working-class) is naturally noble, generous, perceptive and an all-round great guy. This is not only tedious, it also undercuts the drama of the ensuing tragic situation.

Jeremy Paul’s Return of Favours is much better. Mr Marsh (George Cole) is alarmed to find that his wife’s awful friend Judith and her even more awful married boyfriend Roger have been using his flat as their little love nest while he’s out. This turns out to be rather to Mr Marsh’s advantage as it fits in with a little plan of his own. It’s not difficult to guess what’s going to happen but some fine acting (especially from George Cole) makes this a nicely creepy little tale.

Unfortunately John Kershaw’s The Lesser of the Two is another dud, a dreary story of a man recently released after serving a prison sentence for a terrible crime of which he claims to be innocent. He finds he’s now unwelcome in his own home and in his own neighbourhood.

Things get back on track with Hugh Leonard’s White Walls and Olive-Green Carpets, a delightfully twisted story of revenge, infidelity and madness. 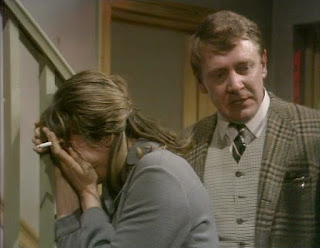 In Roger Marshall’s Sour Grapes two English tourists in Spain are menaced by a mysterious but clearly very dangerous German criminal. Staying alive in such a situation is one thing; remaining sane and human is quite another. This episode benefits from its enigmatic quality - there is no possibility of communication with the criminal and his motives remain obscure.

Come Into My Parlour is a story with potential but the motivations of the characters stretch credibility a little too much and are somewhat contradictory.

The final episode, The Party’s Over, is notable as being the only episode to have a period rather than a contemporary setting, being set in the 1920s. It’s an  OK episode although the plot is not terribly difficult to predict. Its main asset is an enjoyably villainous performance by Edward Fox as an utter cad who plans to murder his wife.

When this series concentrates on moody psychological thrillers with a healthy dose of horror it’s very good indeed. Unfortunately when it drifts into Socially Aware Drama territory it becomes very very tedious. Luckily it mostly stays in psychological horror territory and the hits outnumber the misses. And the episodes that do hit the target are very good indeed.

Network have released the complete series on DVD in Region 2.

Shadows of Fear is, like most anthology series, very uneven. In fact it’s more uneven than most, but in the final analysis there are more good episodes than bad and some are extremely good. Worth a look.
Posted by dfordoom at 16:56