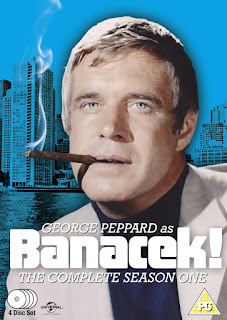 Banacek had an interesting history. In the early 70s NBC was experimenting with “wheel series” - the idea being that instead of making a single series for a particular timeslot they’d make three different series which would screen in alternate weeks in the same timeslot. Their first attempt had the umbrella title The NBC Mystery Movie. The three series were Columbo, McCloud and McMillan and Wife. It was hugely successful and inspired the network to do the NBC Wednesday Mystery Movie with Banacek, Cool Million and Madigan screening on a three-week rotation.

Cool Million and Madigan sank without trace after a single season but Banacek did well. It ran for two seasons and was renewed for a third season but that third season did not materialise because star George Peppard quit for reasons that say quite a bit about his idiosyncratic approach to his own career. He was going through an acrimonious divorce and he feared that most of his earnings from a third season would have gone straight to his ex-wife. So he walked away from it. Peppard was a fine actor who had a successful career that should have been even more successful.

The big advantage of the wheel series concept was that it allowed for much longer shooting schedules than were usual in television. That permitted plenty of location shooting and high (by television standards) production values. Each episode was in effect a feature-length made-for-TV movie but with the same recurring characters.

Banacek had one thing in common with Columbo - both series employed a kind of ongoing gimmick that gave thjem a distinctive flavour. Each episode of Columbo was an inverted detective story in which the identity of the murderer is revealed at the beginning rather than the end. Each episode of Banacek is an impossible crime story. 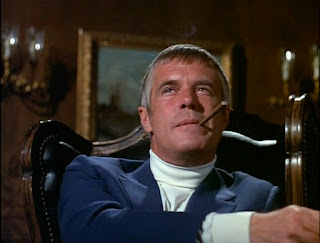 Thomas Banacek is a freelance insurance investigator. When a robbery or suspicious arson or similar crime is committed the insurance companies naturally carry out their own investigation. If after sixty days the crime has not been solved it is thrown open to anyone who cares to try to recover the money or goods. If they succeed they get ten percent of the insured value. A freelance insurance investigator who is good at his job can make a great deal of money. Banacek is very good. He is as a result very wealthy. Which is just as well. After a deprived childhood Banacek has developed a taste for the good things in life. He collects antiques, he lives expensively, he drives a very cool 1942 Packard 180 roadster. And oh yes, he has expensive tastes in women.

The pilot, Detour To Nowhere, aired in March 1972. This is a classic impossible crime story. An armoured car disappears near the border between Texas and Oklahoma. Literally disappears. Without a trace. With $1,600,000 worth of gold on board. That’s a big payout for the National-Meridian Insurance Company. Their chief investigator, McKinney (Charles Robinson), has made no progress at all on the case. The one thing that bothers McKinney more than not solving the case is that after 60 days it can be taken up by anybody. Including Banacek. And McKinney just cannot stand the idea that Banacek might recover the money. McKinney would do anything to prevent this.

Not that this worries Banacek. In fact it amuses him - it adds a bit more zest to the case. 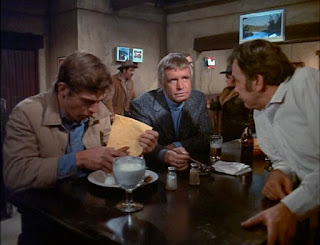 This story establishes the character of Banacek - wealthy, highly cultured, a connoisseur of  beauty, slightly arrogant, devilishly handsome, charming and brilliant. We also find out that beneath the charming and cultivated exterior Banacek is a man who can handle himself in a street brawl, and once he takes up a case he is unlikely to be deflected by any setbacks or any dangers he might encounter.

The casting of George Peppard as the Polish-American Banacek proved to be inspired. Peppard has plenty of boyish charm but he’s also convincing as a guy who is tougher than he seems to be, and he can handle the odd moments of low-key humour with ease. He’s a slightly prickly character but he’s likeable as well. The other two regular cast members are Ralph Manza as Banacek’s wise-cracking driver Jay Drury and Australian-born Murray Matheson as slightly eccentric rare book dealer Felix Mulholland who just happens to be a mine of information on all manner of esoteric subjects.

The first episode of the series proper, Let’s Hear It for a Living Legend, offers us an impressive enough impossible crime. A pro football star vanishes. Not such a big deal, except that at the moment he vanished he was playing in a game in a stadium in front of tends of thousands of people. In spite of the fact that his vanishing act was also caught on camera by a TV network there is still no explanation. One moment he was there - the next he was gone. 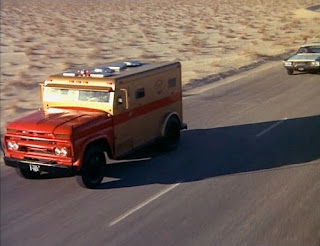 In Project Phoenix Banacek has to find a stolen car. Not just any stolen car, but a super-secret super-high tech experimental car insured for a cool five million dollars. The excellent No Sign of the Cross sees Banacek trying to recover a fabulously valuable medieval cross. This episode is interesting in that we get to see a slightly different side of Banacek. Although he’d be the last one to admit it he does have a softer warmer side. In A Million the Hard Way Banacek investigates the disappearance of a million dollars from a casino in Las Vegas. Casinos tend to be rather obsessive about security. Anyone wanting to steal money from them would have to come up with a pretty clever plan and this one is a peach. This is an impossible crime story that stretches credibility a little but then all impossible crime stories have to be a bit outlandish. This one is very outlandish but it’s certainly fun.

Banacek has the same kind of feel as the other successful NBC Mystery Movie series - the  crimes take place among the rich and famous, or the rich and powerful, there’s an emphasis on the detective’s use of brainpower rather than muscle in solving the cases and there’s a studious avoidance of the sleazy and sordid. This all serves to make Banacek classy, stylish, civilised and very very entertaining. Highly recommended.