All anthology television series tend to be rather uneven in quality and tone - it’s very much in the nature of such programs. The BBC’s science fiction anthology TV series Out of the Unknown (which ran from 1965 to 1971) was more uneven than most, with the episodes ranging from brilliant to absolutely atrocious.

Sadly only four of the episodes from the second season survive and three of them will be discussed here. I've discussed the fourth surviving episode, the superb The Machine Stops, in detail previously and I've also written about season one elsewhere.

Season 2, episode 8, Tunnel Under the World

Tunnel Under the World manages to both brilliant and atrocious at the same time (although fortunately the brilliance outeighs the atrocious elements). It was adapted from a Frederick Pohl short story and went to air in 1966.

June 15th seems to be a perfectly ordinary morning for Guy Birkett (Ronald Hines), apart from the fact that he woke from a bad nightmare about an explosion. Oddly enough his wife Mary (Petra Davies) had a very similar nightmare. There are the usual little annoyances. The newspaper is full of advertisements. The radio broadcasts advertising non-stop. There are even loudspeaker vans outside their door irritating them with advertising. A man named Swanson keeps wanting to make an appointment with Guy but Guy is too busy to see him. Guy works for a chemical company but for some reason he tries to avoid going anywhere near the factory - it’s entirely automated and staffed by robots. The robots have had human brain patterns implanted in them, which Guy finds rather disturbing. 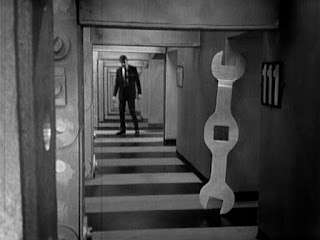 The next morning, June 15th, Guy once again awakes from a nightmare. The advertising is still all-pervasive. Swanson is still trying to see him. Guy is still busy. The morning after this, June 15th, is fairly irritating as well. Guy has not yet realised that every morning is June 15th but he is starting to realise that something odd is going on.

You won’t be surprised to learn that the answer to the puzzle has something to do with advertising - the script has already bludgeoned us over the head with that idea. The solution also turns out to have something to do with evil cigar-smoking capitalists who look like they’ve just stepped out of a 1930s Soviet propaganda poster.

Despite the extraordinarily crude political message of the story the episode does contain some very very good genuine science fictional ideas. It’s a pity that the cardboard villains weaken the impact of these ideas.

Production designer William McCrow did a great job with the sets which reinforce the paranoid atmosphere very cleverly (and much more subtly than the script).

Tunnel Under the World deals with many of the themes that obsessed science fiction writers in the mid-20th century - paranoia, social atomisation, the fine line between reality and illusion, the crushing of the individual spirit. It’s a bit of a mixed bag but it’s still very much worth a watch the final sequence is chilling and quite brilliant.


Level 7 is an object lesson in how not to do television science fiction. It’s preachy, didactic, obvious and dull. It’s yet another nuclear war scare story, which must surely be the most tedious of all science fiction sub-genres. Level 7 was adapted by J. B. Priestley from Mordecai Roshwald’s novel. 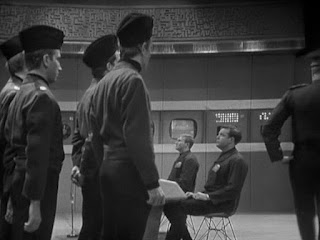 Level 7 is the lowest and most secure level of a nuclear bunker from which nuclear war can be conducted by push button. The personnel are carefully selected from people with no emotional attachments. They live in a secure sterile environment where they become totally dehumanised. The story makes use of every possible cliché of this cliché-ridden sub-genre. The commanding officer (played by Anthony Bate) is a stereotypical evil military type. The personnel are given numbers rather than names. Life is regimented and surveillance is constant. There is of course the over-sensitive guy who cracks up under the strain, which doesn’t work because he’s already clearly so neurotic that he would never have been selected in the first place. The hero suddenly switches from gung-ho enthusiasm to agonising doubts for no reason whatsoever.

Apart from being incredibly preachy the biggest problem is the total absence of dramatic tension. What should be the key dramatic moment is handled with extraordinary dullness. The sets are flat and uninteresting. The lighting is flat. Everything is flat and lifeless. OK, it’s supposed to be a dehumanising environment but in television terms it’s boring. And it looks cheap, the way only a BBC production can look cheap.

This is message television but the message falls flat because nothing interesting happens, the acting is wooden, the direction is insipid, the dialogue is lame, the pacing is leaden. The greatest challenge to the viewer will be staying awake. Avoid.

Lambda 1 is a mess. Luckily it’s an incredibly entertaining mess!

In the future air and rocket travel has been replaced by something much more revolutionary - tau travel. To get from New York to London you travel through atomic space right through the Earth! The difficulty is that you have to travel through different modes - Gamma Mode, Delta Mode, Epsilon Mode, etc. And the tau ships sometimes slip unexpectedly from one mode to another which has disturbing and frightening effects. The most frightening thing though is the mysterious Omega Mode. Some people claim it doesn’t exist. Others are sure it does exist but don’t want to talk about it. In fact the very idea of Omega Mode has turned tau ship commander Dantor (Charles Tingwell) into an alcoholic. 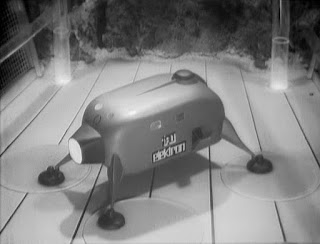 Now the passengers on the tau ship Elektron have discovered that Omega Mode is all too real. They are trapped there and they are going slowly mad. The only hope is for tau controller Paul Porter to pilot the original tau ship, Lambda I, into Omega Mode to rescue them. To do this he will need the assistance of psychologist Eric Benedict (Ronald Lewis), because Omega Mode is not just a phenomenon of tau physics but a state of mind.

If none of that makes any sense to you don’t panic. It made no sense to me either but it didn’t stop me from throughly enjoying this delightfully outrageous and goofy tale. There’s lots of delicious technobabble and as a bonus there’s lots of psychobabble as well. There’s some delirious overacting with Charles Tingwell in particularly going totally over-the-top. There are psychedelic special effects. There are hints of eastern mysticism. There are sets that would have been rejected as too cheap for Doctor Who. And lots of breathless excitement!

You just have to put your brain on hold and enjoy the ride. Highly recommended!

It is of course unfair to judge the second season by the four surviving episodes but they are all we have and overall the impression is of a series that sometimes set its sights too high but somehow succeeded brilliantly against the odds (The Machine Stops), sometimes set its sights high and failed, and at other times was all over the place covering the gamut from the sublime to the ridiculous. It's still an interesting series that took risks and it's worth having a look at.

Email ThisBlogThis!Share to TwitterShare to FacebookShare to Pinterest
Labels: 1960s, anthology series, british tv, out of the unknown, sci-fi