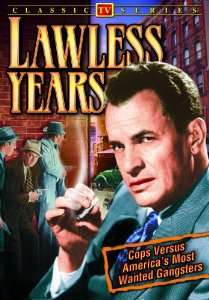 The Roaring Twenties was an established element in American mythology and had provided the inspiration for numerous movies. It was inevitable that sooner or later American television would recognise the potential of this era. In 1959 the ABC network scored a huge commercial success with the excellent The Untouchables series based on the memoirs of Eliot Ness. But NBC had beaten them to the punch with their series The Lawless Years, based on the memoirs of another real-life Roaring Twenties cop, Barney Ruditsky of the NYPD. The Lawless Years went to air in August 1959. The Untouchables premiered in October 1959 although the pilot (the excellent The Scarface Mob) had screened in April of that year. So it’s probably fair to say that both series were developed independently at more or less the same time.

The formula is very similar to that of The Untouchables, with stories based on real-life incidents and with a semi-documentary style that goes back to movies like The Naked City.

The era of jazz and Prohibition and gangster wars certainly provides plenty of suitable material. The Untouchables dealt with the most famous criminals of the 20s. The Lawless Years tells the stories of slightly less known figures (Ruditsky was a New York cop rather than a Chicago cop) although some big names in the world of gangsters like “Legs” Diamond do make appearances.

The Lawless Years is a very handsomely mounted series. There’s plenty of action. There’s a strong sense of verisimilitude and a gritty hard-edged feel. So why is The Lawless Years now forgotten while The Untouchables is considered one of the classic series of American television? 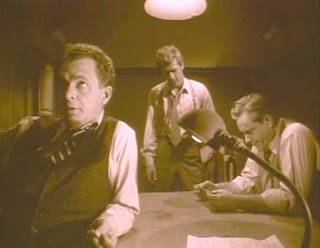 The first thing that needs to be noted is that The Lawless Years was far from being a flop. It ran for three seasons and 47 episodes from 1959 to 1961. The Untouchables of course was a much bigger hit but The Lawless Years still performed quite creditably.

As to the question of why The Untouchables succeeded more completely in capturing the imagination of American (and global) television viewers there are several answers. The Lawless Years followed the standard format of 1950s TV of half-hour episodes while The Untouchables adopted the more flexible one-hour format which allowed for richer characterisation and better developed plots.

The New York setting is also a slight weakness, given that so many of the more colourful 20s gangsters were Chicago-based. The hero of The Lawless Years being a New York cop  is confined to combatting New York mobsters. The hero of The Untouchables, Eliot Ness, being a US Treasury agent has the opportunity of taking on criminals nationwide (and The Untouchables played fast and loose with historical fact by having Eliot Ness involved in many cases in which his real-life counterpart played no part at all).

There’s also no question that the star of The Lawless Years, James Gregory, while being a fine character actor does not have the charisma or the movie star looks or the youth of Robert Stack. Gregory is excellent but to carry a series you really do need charisma. 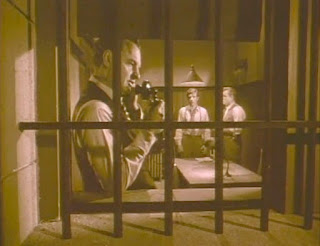 The complete series of The Lawless Years is available on DVD. Six episodes are included in Mill Creek’s Best of TV Detectives budget public domain boxed set and they’re the six that I’ve seen.

The Cutie Jaffe story is the story of an ambitious young punk who starts out hijacking a shipment of liquor and thinks he’s hit the big time. The Dutch Schultz Story introduces the sinister Nicolides whose business it is to arrange murders. He will reappear in other episodes. The Silva Story illustrates both the strengths and the weaknesses of this series. It’s an ambitious story about a mobster’s plans to unite every gang in the country, it’s well-crafted and well-executed and it’s enlivened by a fine performance by Martin Landau but as good as it is (and it’s very good) one can’t help thinking how much better it would have been in a one-hour format with the opportunity to explore Silva’s comp[ex motivations in depth.

The Morrison Story deals with a corrupt judge. It’s a bold and audacious story with a savagely cynical edge to it that must have had quite an impact in 1959. The Poison Ivy Story tells the story of doomed hoodlum Harry the Horse and his proteges in 1920s Brooklyn. in some episodes Barney Ruditsky does little more than provide the opening and closing voice-overs but this time he’s right at the centre of the action. And we get to see a glimpse of the real Ruditsky, a very young and very determined cop with a streak of ruthlessness.

The Lawless Years might not be quite equal of The Untouchables but it’s still a fine series offering its own perspective on the Roaring Twenties. Highly recommended.
Posted by dfordoom at 22:51