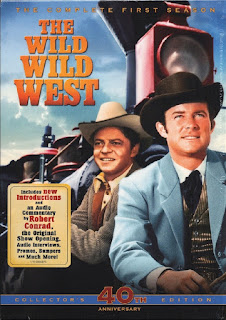 The Wild Wild West was one of the most successful American action adventure series of the 1960s. Beginning in September 1965 it ran for four seasons and would have run longer had it not fallen victim to pressure on the networks to reduce the level of violence on television. It’s hard to imagine today that this series could haver been seen as excessively violent!

The basic premise is one of those brilliant ideas that work so well that you wonder why it hadn’t been tried before - a James Bond-style spy thriller set in the Wild West.

Jim West (Robert Conrad) and Artemus Gordon (Ross Martin) are US Secret Service agents who battle a variety of foes from their headquarters aboard a special train. Since they take their orders directly from President Grant we can assume it’s set in the 1870s. They are equipped with the kinds of gadgets James Bond would have employed had he been a spy in the 1870s. This series is often credited (rightly) as being one of the major inspirations for the steampunk style of science fiction.

Jim West is your standard square-jawed action hero. Artemus Gordon relies on brains rather than brawn and is a master of disguise (although when disguised he still looks remarkably like Ross Martin). Conrad had been reluctant to audition for the rôle of West believing that he had no chance whatsoever of landing it. Fortunately he decided to give it a go and he makes a fine hero. It’s obvious from his brief introductions to each episode on the DVDs that Conrad remembers The Wild Wild West vividly and with a great deal of fondness. Ross Martin complements him perfectly. Conrad is proud of the fact that he did most of his own stunts, leading Ross Martin to remark (much to Conrad’s amusement) that, “Conrad did all his own stunts. I did all my own acting.” 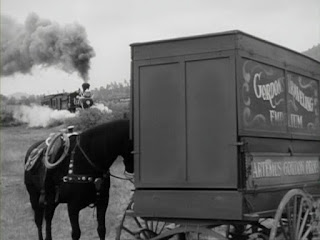 The pilot episode, Night of the Inferno, does an efficient enough job of establishing the characters and the basic premise. It also introduces us to the train that will play such an important part in the series (and give it so much of its flavour). In his audio commentary to this episode Robert Conrad points out that the series was originally intended to be a fairly conventional western. The idea of making it more of a James Bond in the West series was something that gradually developed. There are some gadgets in this episode but it lacks the outrageous elements of the fantastic that would later become so familiar. That was perhaps wise - those elements might have been a bit too strange for viewers unaccustomed to seeing the western and spy genres blended together. Introducing the series as a relatively straightforward western was playing safe and it obviously worked since the series subsequently got the green light.

The show’s initial production history was somewhat troubled with several changes of producer early in the first season (in fact this season had six different producers). Each producer had his own ideas of what the series was going to be. It took quite a while for a completely successful format to be found. It’s interesting to watch the first season in production order rather than the order in which it was broadcast - you can see the very obvious changes made by the various producers.

The first few episodes were produced by Collier Young and it’s clear that he saw the series as basically a western with just the barest hint of the secret agent genre. Episodes like The Night of the Double-Edged Knife are pretty conventional stuff. Young also decided to give Jim West an English valet, Tennyson, an idea that was immediately dropped when Young departed after just three episodes. Tennyson was a harmless character but not really necessary. The Night of the Fatal Trap is particularly weak - really not much more than a routine western. 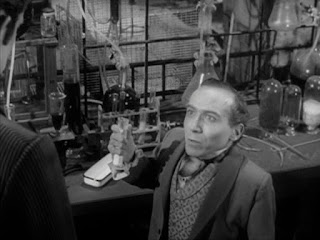 The series started to find its feet as soon as Fred Freiberger took over as producer. The Night of the Deadly Bed is a major step in the right direction. It has a full-blown larger-than-life diabolical criminal mastermind and it has a definite hint of steampunk with the fire-breathing killer train. The Night the Wizard Shook the Earth is even better. It introduces possible the most popular of all the villains who populate the series - the diminutive but delightfully crazy Dr Loveless. The use of clockwork (on a very big scale) to trigger a bomb is a nice steampunk touch.

The Night of Sudden Death has tigers, crocodiles, a circus and an African chief and has the right touch of outrageousness. The Night of a Thousand Eyes has Jim and Artemus battling pirates on the Mississippi River and it has the kind of wonderful larger-than-life villain that Freiberger insisted that each episode should have in order to present his heroes with worthy adversaries.

The Night That Terror Stalked the Town is absolutely classic cult TV. You just can’t do better in the cult stakes than evil midget mad scientists. Plus a whole town of creepy wax dummies. And very steampunk-ish gadgetry in the mad scientist laboratory. 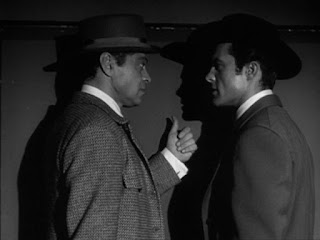 Even more in the steampunk vein is The Night of the Glowing Corpse, in which West has to foil the attempted theft of radioactive franconium from the French government. We know that this episode takes place in 1870 since France is at war with Prussia but has not yet been defeated. The nature of radioactivity was in reality not understood until the 1890s. Radioactivity is not the only steampunk element here - Artemus has invented a primitive aqualung (and a couple of other cool tricks as well), and a French scientist has invented a delightful early version of a Geiger counter. The more steampunk the series got the better it became.

Despite the behind-the-scenes turmoil the first season of The Wild Wild West proves that American television in the 60s could produce a series that could match the best British series of that era such as The Avengers for originality, style and quirkiness (if perhaps not quite achieving the same degree of wittiness). The Wild Wild West is clever and it’s enormous fun. Highly recommended.
Posted by dfordoom at 03:03