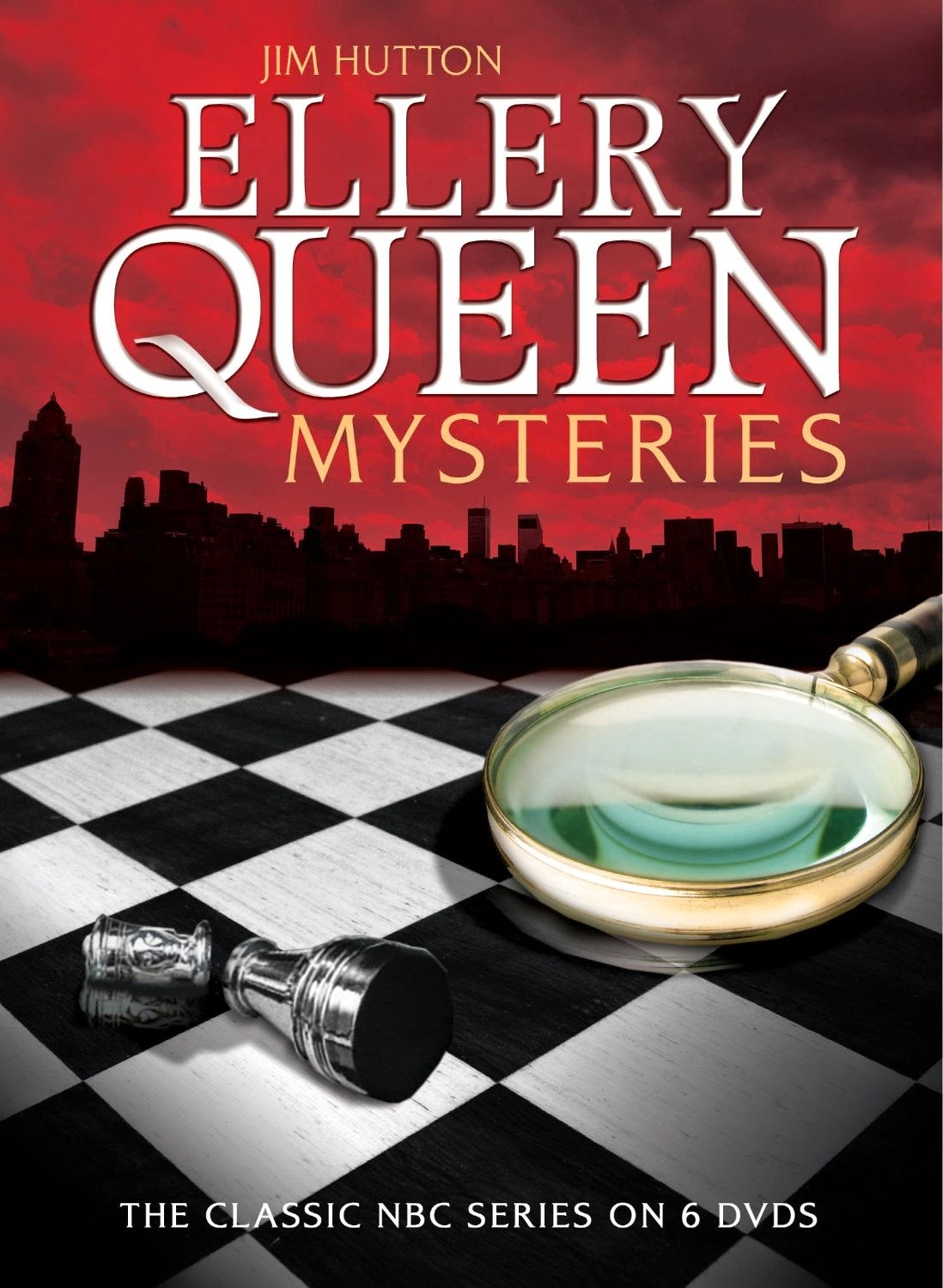 The Ellery Queen TV series which aired on NBC for one season in 1975-76 was a very successful attempt to capture the flavour of the very popular Ellery Queen mystery novels. Although critics generally loved it and it is now highly regarded the series unfortunately lasted only one season.

The late 1940s has been chosen for the setting. I’m not sure that settings are always absolutely 100 percent accurate but they certainly look terrific.

Like any series set in the past it reflects the time that it was made as well as the time in which it’s supposed to be set. That’s always inevitable to some extent but the producers in his case have tried very hard not to make it too obviously 70s.

They’ve also managed pretty successfully to keep 1970s cynicism out of the series and to avoid making value judgments about the 40s.

The 70s was an era of increasingly graphic violence and sleaze in movies and this trend was starting to become evident in television as well. The Ellery Queen series made a refreshing change from all that. The series captures the flavour of the golden age of detective fiction where the emphasis is on solving an intricate puzzle rather than wallowing in sleaze and degradation.

Jim Hutton makes a very engaging Ellery Queen, perhaps even more engaging (and rather less snobbish) than the Ellery of the novels. He does look rather boyish but his enthusiasm is infectious. David Wayne plays Ellery’s father Inspector Richard Queen and he’s just as personable. John Hillerman has an amusing recurring role as radio detective Simon Brimmer who is constantly trying to prove himself a real detective, except that his solutions to the crime are invariably ingenious but wrong. Simon Brimmer did not appear in any of the Ellery Queen books, being a character created specifically for the TV series. He adds an element of comedy which was presumably considered necessary for television. 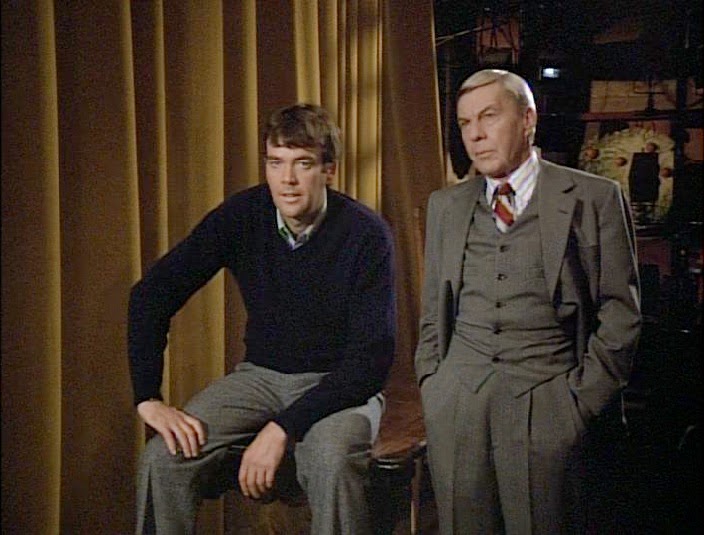 The series borrows one of the most famous devices of the early Ellery Queen novels, the famous Challenge to the Reader. Toward the end of the novels the reader would be informed that he or she now possesses all the information necessary to solve the mystery and is challenged to match wits with the fictional detective. In the TV series Ellery breaks the fourth wall and addresses the audience directly offering the same challenge. It was quite a bold movie to include this element but it works very well.

Ellery Queen the detective is also Ellery Queen, successful writer of detective novels. Quite a few of the stories have a show business background or deal with some aspect of the literary or art worlds. Several deal with radio. All of this is quite fitting given that the Ellery Queen of the books was for a time a Hollywood screenwriter, and given that there was a successful Ellery Queen radio series. One episode, The Adventure of the Comic Book Crusader, deals with murder in the comic book industry. The Adventure of Veronica's Veils deals (very wittily) with an attempt to revive burlesque.

The Adventure of the Pharaoh's Curse uses a museum as a setting, a slight variation on the show business settings but it’s still dealing with a similar kind of world, a world of riches and glamour. The early Ellery Queen novels appeared during the Depression and part of their escapist charm was that they took place in the world of the wealthy and glamorous. This is one feature that the TV series retains and it’s a very attractive feature although in 1975 it may have been rather unfashionable. 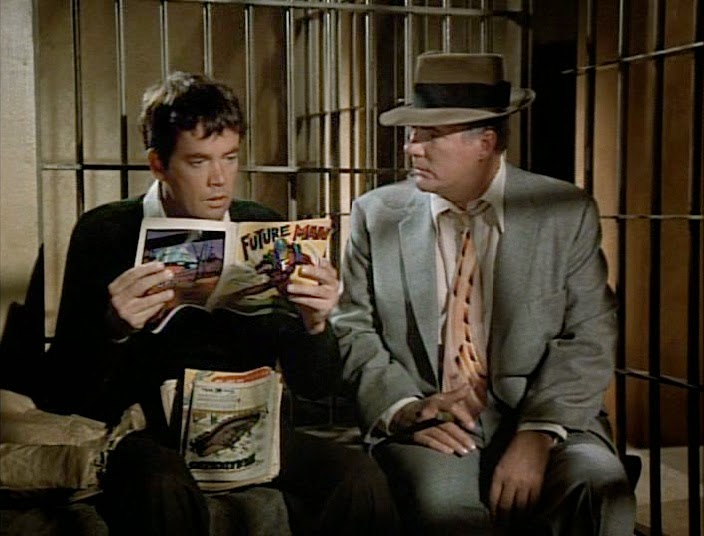 The show business and literary backgrounds do of course have the effect of emphasising the fictional nature of the series. Television audiences generally prefer series that give the illusion of realism and this, combined with the breaking of the fourth wall mentioned earlier,  may have been slightly off-putting to television audiences in 1975. This may have worked to the show’s commercial disadvantage although to my way of thinking it adds considerably to its charm. This is a series that is quite unapologetically uninterested in realism.

The acting also tends to reinforce the feel of unrealism, with the guest performers clearly feeling free to give slightly larger-than-life performances. The series boasts some pretty impressive supporting players and on the whole they appear to be enjoying themselves immensely.

The sets, the costumes and the props (and especially the cars) look magnificent. Everything is very colourful, and since we’re used to seeing the 1940s in black-and-white in old movies the effect is quite startling. It’s another factor adding to the deliberately unrealistic feel - everything is bright and vibrant and awash with colour. Everything looks shiny and brand new. Everyone drives a car that looks like it has just driven out of a showroom. Everyone wears clothes that look brand new. Nothing is worn or battered. This might be considered a fault in any other series but in this case it gives the viewer the feeling of having stepped into a kind of alternative universe. Detective stories were often criticised as escapist entertainment and this TV series goes out of its way to present itself as unashamed escapism. 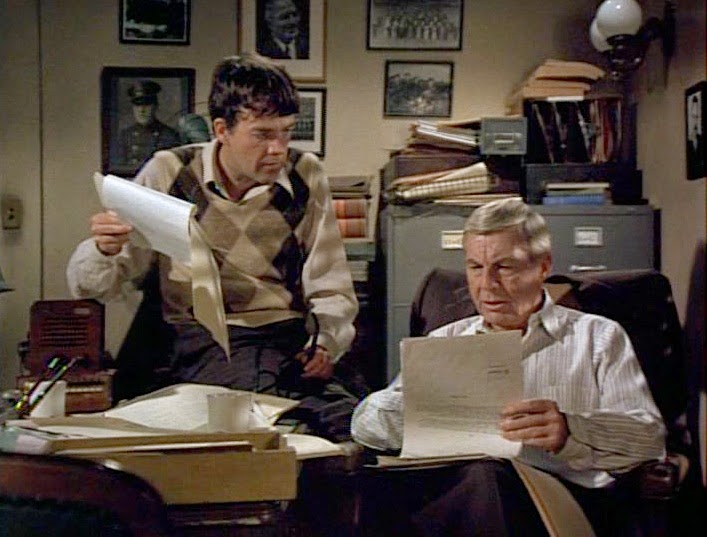 If your preference is for gritty realistic crime dramas then you’ll find the Ellery Queen series to be about as diametrically opposed to your tastes as a series could possibly be.

Some episodes are based on Ellery Queen stories whilst others are original to the television series. In both cases a genuine and fairly successful attempt has been made to adhere to the rules of the classic fair-play detective story of the golden age of the genre.

The TV series does add some humour to the basic Ellery Queen formula but this is, very wisely, not allowed to dominate proceedings. Ellery himself at times strikes a mildly comedic note with a slight tendency to be totally disorganised about any aspects of life not directly connected to crime, but this is kept within very strict bounds. The temptation to make Ellery scatter-brained and bumbling is resisted. Jim Hutton has enough natural charm and warmth to make it unnecessary to play the role too overtly for laughs. Purists may feel that his version of Ellery is not quite the Ellery of the books, but on the whole his performance is not too much at variance with his literary original.

The tone is fairly light-hearted but then that’s basically true of the early Ellery Queen novels as well, which are mercifully larger free from the depressing grimness of so much modern crime fiction.

On the whole the Ellery Queen series is pure entertainment and it’s an absolute delight. Very highly recommended.
Posted by dfordoom at 00:12