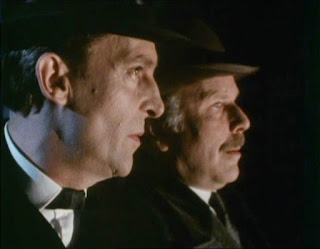 It’s slightly outside our usual timeframe but Granada’s wonderful Sherlock Holmes TV series that ran from 1984 to 1994 is so good it’s worth discussing anyway. And since I’ve been rewatching a few episodes recently that’s exactly what I’m going to do.

Much of the well-deserved praise this series has received is due to the truly inspired casting of Jeremy Brett as Holmes. There have been other fine interpretations of the rôle. I’m still very fond of Basil Rathbone as Holmes and Ronald Howard in the 1954 TV series was also a superb, if rather unconventional, Holmes. The fact remains that Jeremy Brett is the definitive screen Holmes and his performances are unlikely ever to be surpassed.

This is a brilliant and mercurial Holmes but he is also unstable and neurotic.  Playing Holmes in this manner could easily have been disastrous but Brett is in complete control and he does not make the mistake of overly emphasising the great detective’s darker side. His Holmes might be somewhat unpredictable but he can also be generous, compassionate and at times almost warm and affable. The dark side is however certainly there. Interestingly enough, a few years before the Granada series Brett had played Dr Watson in a stage production.

Equally revolutionary, and equally successful, is the approach taken to Dr Watson. The Watson of this series is essentially the Watson of Conan Doyle’s stories. He might not be capable of following his friend’s brilliant deductive reasoning but he is a calm thoughtful man of intelligence and sound common sense. He is exactly the sort of man that Holmes would choose as a friend and colleague - their personalities are diametrically opposed but complementary. 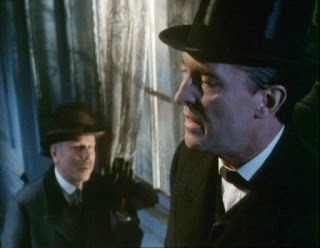 David Burke played Watson in the first thirteen episodes. After his departure to join the Royal Shakespeare Company he suggested Edward Hardwicke as his replacement. While the two actors have slightly different approaches both are equally good and both are perfectly convincing as the Dr Watson created by Conan Doyle. This is a Dr Watson who is frequently bemused and even exasperated by his friend’s idiosyncracies while at the same time being fiercely loyal.

The Resident Patient is one of the earlier episodes (from 1985) with David Burke as Watson. It has the kind of baroque plot that makes Sherlock Holmes stories so much fun, with mysterious Russian aristocrats, rare and exotic diseases, bogus burglaries and events from the past catching up with people. It also has a fine guest performance by the very underrated Patrick Newell (probably best remembered as Mother in The Avengers).

It also has Sherlock Holmes at his most eccentric, stubbornly refusing assistance to a client because he is convinced the client is not being honest with him even though he knows the client is most certainly in need of help. 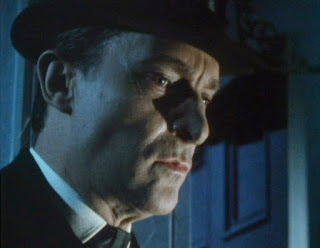 The Empty House introduces Edward Hardwicke as Watson. To be honest it’s not a great story but it is extremely important since it reintroduces Holmes after his dramatic and fateful struggle with Professor Moriarty at the Reichenbach Falls in The Final Problem. It’s also important in its implications for the Holmes-Watson friendship. Hardwicke settles into the rôle of Watson very confidently which can’t have been easy given that David Burke had been such an excellent Watson. The Empty House also offers Jeremy Brett plenty of opportunities to deliver a trademark bravura performance.