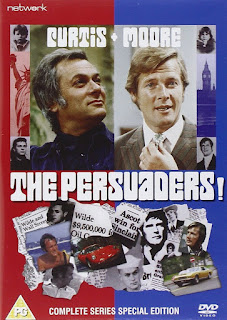 Towards the end of the run of The Saint producer Robert S. Baker came up with what he thought was a very cool idea - why not pair the smooth, urbane and very English Simon Templar with a brash, cocky American in a kind of buddy movie episode. The episode in question, The Ex-King of Diamonds, worked so well that it seemed a rather obvious move to turn the idea into a new ITC action adventure series. Thus was The Persuaders! born.

In The Ex-King of Diamonds the brash American was a Texas oilman played (extremely well) by Stuart Damon. For The Persuaders! a bigger name star was wanted and eventually Tony Curtis was settled on. Tony Curtis of course would not have made a very convincing Texan so the character was rejigged as a New York financier.

Two essential parts of the formula for The Persuaders! had already been laid down in The Ex-King of Diamonds. Firstly, the two protagonists should come from very different social backgrounds and this have very different personal styles. Secondly, they should initially hate each other’s guts but eventually develop a bond of respect and even affection. In fact both The Ex-King of Diamonds and the first episode of The Persuaders! would feature a spectacular fist fight between the two protagonists (and in both cases the fight scene was filmed entirely without stunt doubles).

Lord Brett Sinclair, the character played by Roger Moore, is obviously very similar to the Simon Templar of the Saint TV series - rich, cultured, charming and with a taste for the good things in life. The main difference being that Lord Brett Sinclair really is as aristocratic as he seems to be while Simon Templar’s background is actually rather shady. Tony Curtis’s character, Danny Wilde, is a poor kid from the Bronx who clawed his way to the top on Wall Street.

The opening episode of any series presents potential difficulties since it has to spend quite a bit of time establishing the characters and the general setup of the series while still trying to tell an exciting action adventure story. For the debut episode in this instance, Overture, that task was even more difficult since the audience has to be given quite a lot of information not only about the two heroes but also about the mysterious figure in the background pulling the strings. Fortunately Brian Clemens is equal to the task. He’s helped by the clever opening titles sequence which actually tells us most of what we need to know about the backgrounds and personalities of the two heroes. This leaves Clemens free to concentrate on the tense and initially adversarial relationship between the two men and on their puppet-master, Judge Fulton. Fulton is now retired from the Bench and has dedicated   his life to bringing to justice those criminals that the law cannot touch. 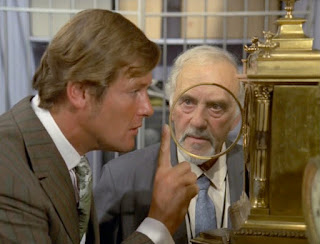 Lew Grade always understood that if a British TV series was to have any chance in international markets, especially the US, it had to have production values that were the equal of any American series. For The Persuaders! ITC really pulled out all the stops. In Roger Moore and Tony Curtis it had very big name stars. It boasts an enormous amount of location shooting. The sets are sumptuous. And of course the cars and the clothes had to be stylish and expensive. The cars, Lord Brett’s Aston Martin DBS and Danny Wilde’s Dino Ferrari, certainly qualify as stylish. As for the clothes - well it has to be said that this was the 1970s and they’re very 1970s indeed. Some of Lord Brett’s clothes (which Roger Moore designed himself) would not have been out of place in Jason King’s wardrobe. Luckily both Moore and Curtis are the kinds of stars who can just about get away with wearing 70s outfits.

It has to be said that the overall quality of the scripts was rather uneven. Of course this was true of a number of the ITC action adventure series. Episodes like Powerswitch are fairly routine while The Time and the Place is an ill-advised attempt at a political drama.

In The Gold Napoleon, a much better episode, Brett and Danny come up against a clever plot involving counterfeit coins. A gang has discovered an ingenious way to dispose of stolen gold bullion - turn the bullion into fake coins but admit that the coins are fakes. That way they’re not technically doing anything illegal, just selling the coins for their gold value. 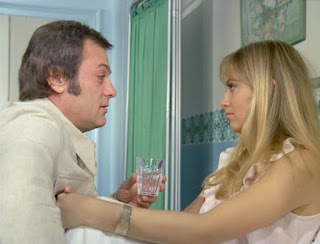 Greensleeves, scripted by Terence Feely, is a great deal of fun. One of Brett’s country houses is being renovated, which is rather strange since he knows nothing about it. Brett and Danny decide to investigate and uncover a plot that involves African politics, the Foreign Office, nickel mines and a fake Lord Brett Sinclair. Doubles were very popular plot devices in the television of this era but this one adds a few twists, plus it has secret passageways and dungeons and it gives Tony Curtis (who had done a few swashbucklers in his time) the chance to brush up on his sword-fighting skills. Take Seven tells the story of a wealthy heiress who suddenly finds herself dispossessed of her fortune but when her long-lost brother, long believed to be dead, turns up. She is sure he is an impostor and Brett and Danny set out to prove that she’s right. Long-lost brothers, like doubles, were an over-used cliché. These two episodes demonstrate that even over-used clichés can make very entertaining television if they’re done with enough style.

A Death in the Family is a very untypical but hugely enjoyable episode that gives Roger Moore the chance to have some fun playing several different characters. Overall it has a feel very reminiscent of The Avengers (perhaps not surprising since writer Terry Nation had penned a number of episodes of that series).

The biggest asset of this series was of course the casting of the two leads. Not only do Moore and Curtis both have the necessary charisma and style - they work beautifully together. Curtis quickly earned a reputation for being unpredictable, temperamental and generally extremely difficult to work with. What no-one could ever deny though is that once the cameras started rolling he delivered the goods. It soon became obvious that trying to tell Curtis how to play the rôle was both futile and quite unnecessary. He loved the part and he understood the character perfectly and he knew exactly what he was doing. He was allowed to choose his own wardrobe and to add his own idiosyncrasies to the character (just as Danny’s penchant for wearing gloves). The fact that Roger Moore was renowned for being incredibly easy to work with presumably made it easier to deal with Curtis’s somewhat individualistic working habits. 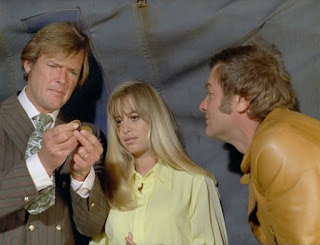 Despite the weakness of some of the scripts The Persuaders! has a lot going for it. ITC spent a lot of money on the series and unlike their earlier series it relies on location shooting rather than stock footage. Production values are extremely high. The two leads are terrific and their onscreen chemistry is superb. The relationship between the two characters works perfectly. The dialogue sparkles (much of it ad-libbed by Moore and Curtis). It was a major hit everywhere - everywhere except the US. Tony Curtis always believed its failure in the US was the fault of the network for screening it too late at night, thus depriving it of the chance to win younger viewers who would have loved it, and his view may well be correct. With Roger Moore already chosen as the next James Bond there was in any case never any realistic chance of a second season.

Network’s DVD boxed set provides generally excellent transfers with plenty of extras including a commentary track for the opening episode featuring both Moore and Curtis. It’s clear from the commentary that Curtis was enthusiastic about the series and remained very fond of Danny Wilde as as character. There are a couple of other audio commentaries and a documeantary on the series.

Despite its short run The Persuaders! rapidly built a solid cult following and its popularity continued to grow in Europe. With its opulence, its unashamed optimism, its celebration of style, its charismatic stars and its generally tongue-in-cheek tone it remains a fan favourite, and with good reason. It’s just so much fun. Highly recommended.
Posted by dfordoom at 06:53