Rivals of Sherlock Holmes - The Case of the Mirror of Portugal 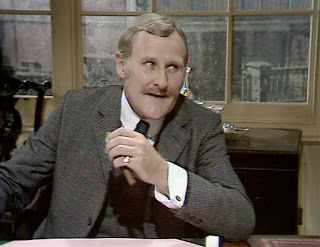 I posted recently about the Rivals of Sherlock Holmes episode The Duchess of Wiltshire's Diamonds dealing with a delightfully colourful rogue. The series featured a couple of episodes dealing with an even more dastardly rogue and swindler - Horace Dorrington, the hero (or rather anti-hero) of Arthur Morrison’s superb 1897 short story collection The Dorrington Deed-Box. The Case of the Mirror of Portugal (first screened in October 1971) shows Dorrington at his villainous best (or worst).

Horace Dorrington (Peter Vaughan) is a private detective, the principal of the Dorrington and Hicks agency (although we never actually hear anything of Hicks and we suspect he may not exist). An impoverished French charcoal-burner, Jacques Bouvier (Michael Forrest) enlists Dorrington’s help to retrieve an item that was stolen from him by his cousin Leon Bouvier (Oscar Quitak). The item is a diamond. A very large diamond. A very large and very valuable diamond known as the Mirror of Portugal that was once part of the French Crown Jewels. It might seem very unlikely that a humble French charcoal-burner would have possessed this fabulous jewel but Dorrington finds his story to be strangely plausible. In fact Dorrington is convinced that the story is true.

The first order of business for Dorrington is to rid himself of Jacques Bouvier as a client. Dorrington intends to retrieve the diamond but he also intends to keep all the proceeds to himself. Dorrington is a very competent private detective but he is also, alas, a very dishonest one. He is in point of fact a thorough scoundrel. 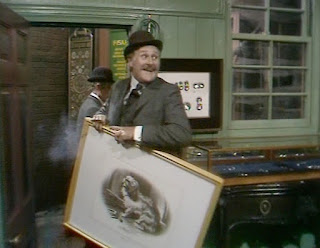 Actually getting hold of the diamond should be child’s play for Dorrington. He’s up against rank amateurs who have foolish ideas about fair play. Or at least that’s what the villainous private detective thinks.

As I mentioned in my piece on The Duchess of Wiltshire's Diamonds this 1971 series was made in the style of British television of the 60s, in other words shot almost entirely in the studio, although this particular episode does include a very brief sequence shot on location (a very unusual feature for this series).

Paul Eddington is almost unrecognisable at first as a diamond merchant with very flexible ethics. Eddington is remembered for his roles in sitcoms like The Good Life and Yes, Minister but he was actually quite a versatile actor. He was memorably slimy and sinister as Strand in Special Branch and The Case of the Mirror of Portugal gives him a chance to be rather shady and sneaky, which he does rather well. 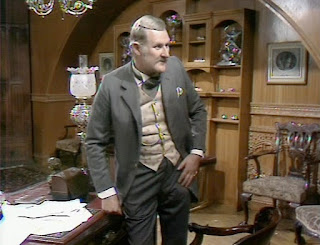 It’s Peter Vaughan’s performance however that dominates this episode. Vaughan was a marvelous actor who could really go over-the-top when required to do so. In this episode he does so to spectacular effect. He plays Dorrington as a moustache-twirling villain straight out of Victorian melodrama. It’s absolutely the right approach.

It’s not just Vaughan’s acting that brings to mind classic Victorian melodrama - everything about this episode is done in that style and it works to perfection.

It’s the combination of an excellent adaptation of a terrific story and Peter Vaughan’s epic scenery-chewing as Dorrington that makes this a superbly entertaining piece of television. Highly recommended.

In fact both seasons of The Rivals of Sherlock Holmes (available on Region 2 DVD from Network) can be very warmly recommended.
Posted by dfordoom at 04:38