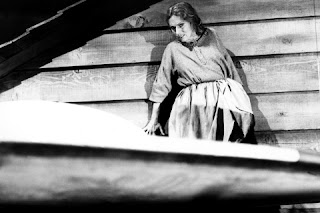 I’m not the most enthusiastic fan of The Twilight Zone but I do have fond memories of some of the episodes written by Richard Matheson and Charles Beaumont. I’m particularly fond of Matheson’s episodes so I figured I’d revisit some of his more memorable contributions.

First cab off the rank will be The Invaders, episode 15 of season 2. It’s generally considered to be one of the best Twilight Zone episodes ever. We’ll see how well it stands up.

The story takes place in an isolated farmhouse where a woman, played by Agnes Moorehead, lives alone. She hears some strange noises and upon investigating discovers a flying saucer on her roof. A very small flying saucer. With two very small crew members. They might be robots or they might be aliens. Either way they’re about six inches high. Somehow this episode has to make such an absurd situation terrifying. And it succeeds. These two small crew members are well armed. Against creatures their own size their weapons would be devastating. Even against a woman so much huger than themselves they can still be pretty nasty.

Adding to the terror is of course the impossibility of communication. She has no idea what these creatures want. All she is sure of is that they seem pretty hostile. Of course she, in her fear and confusion, has done things that might seem pretty hostile to them. In any case it now seems to be a fight for survival, with the odds very uncertain.

There is of course a plot twist, a very famous plot twist, but rest assured I do not intend to reveal it. 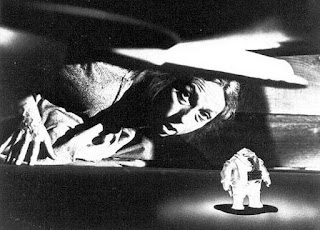 This was a remarkably bold piece of television for 1961. There is only one cast member, and she has no dialogue at all. The entire story has to be told visually, and everything we learn about Agnes Moorehead’s character and her emotional reactions we have to learn without the benefit of dialogue. Fortunately, thanks to a powerhouse performance by Moorehead, a great script by Matheson and inspired work by director Douglas Heyes, it all works superbly.

Playing the entire episode without dialogue was no doubt made easier for Moorehead by the fact that she had studied mime under Marcel Marceau.

The look of this episode is just as bold as the concept. It has a feel more typical of film noir or gothic horror than science fiction, all shadows and very dimly lit. Much of the action is shot so as to appear to be taking place by candlelight. In 1961 flat lighting was the norm in television, partly because broadcast quality in those days was rather poor. It was a brave television director of photography who attempted moody atmospheric lighting and most were terrified of shadows because of the risk that viewers would end up seeing nothing but darkness. George T. Clemens was clearly not afraid to take such risks and his daring pays off.

The flying saucer is in fact the spacecraft model used in the classic sci-fi film Forbidden Planet. The tiny aliens/robots were designed by Douglas Heyes and built, strangely enough, by the make-up department. They were, obviously, puppets and they were worked by Douglas Heyes himself.

It all looks splendid today on Blu-Ray and the Blu-Ray presentation includes no less than four audio commentary tracks! It’s a half-hour episode so expecting the viewer to spend a further two hours listening to four commentaries might seem rather optimistic but this is (quite rightly) regarded as one of the all-time great television science fiction episodes so such an expectation is probably justified. The Invaders really is good enough to make such an effort worthwhile.

This episode not only stands up remarkably well it also remains as boldly unconventional and quirky (both in content and style) as it was in 1961. For all my reservations about The Twilight Zone I have to say that The Invaders is superb television.
Posted by dfordoom at 23:46