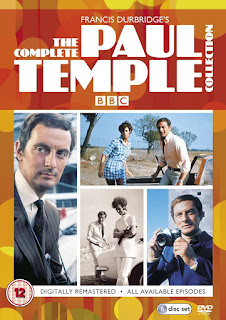 Paul Temple had originally been created by Francis Durbridge for a BBC radio series in 1938. The character later featured in novels, a comic strip and four late 1940s movies (including Calling Paul Temple and Send for Paul Temple which are both great fun). In 1969 it became a BBC TV series. The second and subsequent series were co-productions with a German company, Taurus Films.

The Paul Temple TV series was intended to offer a mix of action and adventure with some lighthearted fun and it proved to be extremely popular, all of which horrified the BBC. Despite its popularity they axed the series and promptly destroyed most of the episodes. Only sixteen of the fifty-two episodes survive, although it is believed that Taurus Films preserved other episodes in German-dubbed versions.

It’s particularly unfortunate that five of the sixteen surviving episodes exist only in relatively poor quality black-and-white versions, since this is a series that really made the most of the possibilities of colour filming.

Paul Temple is a bestselling crime novelist who solve real crimes in his spare time, a formula that has been used in various novels and TV series, most notably ITC’s Jason King a couple of years later. Jason King in fact is basically a much more extravagant version of Paul Temple. As portrayed in the TV series by Francis Matthews Paul Temple also has a taste for fashionable clothing, fine wines and food, and exotic places. Unlike Jason King he has a wife, Steve (Ros Drinkwater), so his tastes don’t include chasing women. Matthews gets to wear some truly outrageous clothing (which apparently he chose personally) - this was the great age of cravats for men. Ros Drinkwater’s wardrobe is pretty impressive also in a late Swinging 60s sort of way.

The entire first season is lost. The earliest surviver is the third episode of season two, Games People Play. On a Mediterranean holiday Paul and Steve encounter movie star Mark Hill (played with considerable flair by George Baker). British television in the 60s displays both a fascination and an anxiety for what was then called the Permissive Society  and the rising tide of violence and anti-social behaviour. Mark Hill represents all of this. He is a wealthy and dangerous degenerate. Mark though goes beyond casual sex, booze  and drugs. His dangerous passion is for playing games. Playing games with people. Mark’s games are the kind that require a victim. Picking Paul Temple’s wife as as victim proves to be a little unwise. Paul Temple can play games as well, and he plays to win. It could have been a fine episode. The problem is that it’s a bit rushed - 50 minutes wasn’t quite enough time to explore the idea fully - and the ending is contrived and unsatisfying. 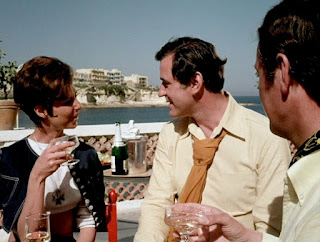 Corrida is interesting, dealing with gangsters and bullfighting in the Camargue in the south of France.

The Specialists is quite a good story of business plotting and assassination. It’s highlighted by some wonderful interplay between Sammy Carson (George Sewell) and Lewis (Garfield Morgan), both gangsters who might be on the side of the angels, well partly at least. In fact George Sewell became a semi-regular cast member, appearing in a total of eleven episodes. We never really find out to what extent Sammy Carson was, or perhaps still is, a  crook. He certainly has far too many underworld connections to be a respectable citizen but he is a loyal and exceptionally useful friend to both Paul and Steve Temple, and Sewell was always an actor worth watching.

Has Anybody Here Seen Kelly? was written by Dennis Spooner, always a promising sign. It’s a delightfully complicated espionage story about a feckless Irish artist named Kelly who seems to be caught in the middle of a international conspiracy and also finds himself accused of murder. He happens to be an old friend of Steve’s so Paul finds himself somewhat reluctantly trying to help out although he doesn’t realise just how complex a situation he’s stumbled into. A guest starring performance by the always delightful Richard Vernon is a highlight.

Motel is a terrific little episode. A strange variety of people turn up at a remoter Scottish hotel during a blizzard. And they keep turning up. Each guest seems to be slightly more eccentric than the previous one. And among these guests are Paul and Steve Temple. Also among the guests is a bank robber. In fact any or all of the guests may be accomplices of said bank robber. Or they may be police officers, or amateurs after the reward money, or even genuine guests there for the fishing. The situation becomes more and more farcical but underneath the farce there is a serious side - there is a great deal of money at stake, enough money to kill for. The whole situation is treated with a wonderfully light touch. Superb television. 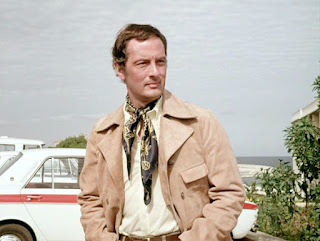 Cue Murder! is even better. The entire episode takes place in a television studio where Paul is participating in a panel show that attempts to solve previously unsolved crimes. This setting works very well, the plot is nicely convoluted and fine supporting performances add to the fun. Philip Madoc is typically and delightfully over-the-top as the host of the TV series.

Death of Fasching was one of Francis Matthews’ favourite episodes and it’s easy to see why. This is a somewhat surreal and slightly experimental episode in which nothing is as it appears to be. The surreal touches invite comparison to The Avengers but in some ways this story is even more daring and ambiguous in narrative terms than anything attempted by The Avengers. Paul and Steve are in Munich for Fasching, a sort of Carnival month in which the normally staid inhabitants of the city let themselves go. Perhaps some of them go just a little bit overboard. There is something very strange going on but the more Paul and Steve find out the more puzzling the whole situation becomes.

Catch Your Death employs a favoured idea of 1960s thrillers - the theft of a virus from a research establishment. The puzzling thing though is that the would-be thieves seem to have been after a virus that does nothing more dangerous than cause the common cold.

Ricochet is a so-so story although it is amusing to see an action adventure story involving coffee smuggling and toboggan racing - both of which are apparently very very serious matters in Switzerland! 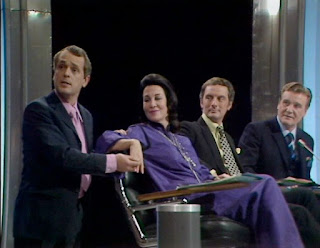 The Guilty Must Die is a delightfully twisted tale of double crosses and triple crosses and dangerous romantic entanglements. An old friend of Steve’s is engaged to be married to be married to smooth-talking but sleazy used car salesman Peter Blane (Patrick Mower in a gloriously over-the-top performance). Steve finds herself trying to warn her friend that Peter is not merely sleazy but also has a very shady past but it seems that love is blind. Or is it?

Paul Temple really is a treat for fans of classic British action adventure television. The location shooting (yes, actual location shooting) in exotic places is a major plus. This series looks stylish and classy. Francis Matthews is a perfect suave playboy crime-fighter hero (and he is certainly the definitive screen Paul Temple) and he and Ros Drinkwater make a great team. Judging by the episodes that have survived the quality of the scripts, although variable, was often very high indeed. It’s all great fun. Very highly recommended.

Network’s excellent DVD release includes all sixteen surviving episodes. It doesn't include a huge amount in the way of extras but the interview with Francis Matthews is certainly worthwhile.