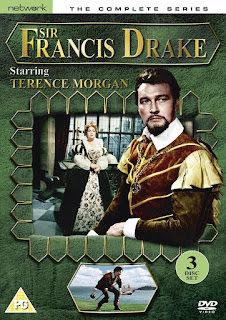 Before turning their attentions to contemporary action adventure series Lew Grade’s ITC had enjoyed great success with a succession of historical adventure series beginning with Robin Hood. The last of these ITC historical series was Sir Francis Drake. It was made in 1961 by which time the success of Danger Man had already pointed towards the future for ITC.

Sir Francis Drake ran for a single season of 26 episodes but while it failed to achieve the level of success that had been hoped for it’s actually highly entertaining.

As always Lew Grade was prepared to spend the money to make the series look good. ITC even built a full-size sailing replica of Drake’s famous ship The Golden Hind (not as expensive an undertaking as you might think since The Golden Hind was a fairly small ship). The costumes look terrific and the sets are mostly very good. With some reasonably decent scripts and a generous helping of action scenes the results are most satisfactory. Like ITC’s other historical series it’s aimed at a young audience but compared to The Adventures of Sir Lancelot the tone is less whimsical and it’s less obviously a mere kids’ show.

The Prisoner kicks off this series in impressive style. It has a sea battle, and a beautiful Spanish lady taken prisoner by Drake, a lady who is determined to avenge Spain’s disgrace by sinking The Golden Hind. There’s adventure, intrigue and action and all pretty well executed as well.

The series tries to provide a balance between adventures afloat and ashore and to provide plenty of variety in story lines. In The Lost Colony of Virginia the fledgling colony’s survival is in serious doubt. Drake is determined that it will survive and gets some unexpected help from a feisty girl who happens to be an expert gunner. 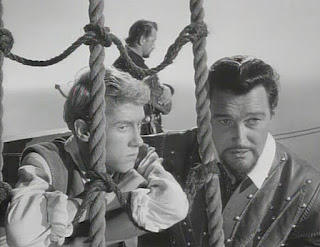 In Queen of Scots the imprisoned Scottish queen may have engaged in one too many conspiracies but Drake suspects she may be less guilty than she seems.

The writers were obviously determined to feature every famous and colourful character of the Elizabethan Era. Scientist, magician and astrologer Dr John Dee qualifies as both famous and colourful. In Dr Dee he runs foul of Sir Francis Drake but Drake cannot afford to make such a powerful enemy (the Queen trusts Dr Dee implicitly) and perhaps Dr Dee is more innocent dupe than villain.

Bold Enterprise has Drake risking his neck by defying an explicit order from the Queen. The temptation to raid a Spanish outpost is just too much for him. Lots of action in this one - a very fine piece of swashbuckling adventure.

The English Dragon has Drake trying to rescue the Queen’s cousin Lord Oakeshott (David McCallum), a difficult task since Oakeshott considers he has very good reasons for not wanting to be rescued and soon Drake himself may be in need of rescue as he blunders into a trap set by the crafty Spanish Ambassador Mendoza.

The Garrison sees Drake delivering supplies to a beleaguered English garrison in the Netherlands, but it turns out to be a phantom garrison. What has happened to the 500 English soldiers? An excellent episode with a few dark overtones and a nicely ironic ending. And a rare episode in which the chief villain is not a Spaniard. 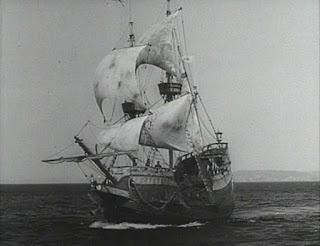 The Flame-Thrower involves an English secret weapon with the perfidious Spaniards trying to steal the secret, the problem for both sides being that the inventor does not want his brainchild used as a weapon.

The Governor's Revenge offers us another example of Spanish wickedness and treachery. The governor of one of the King of Spain’s colonies in the New World has hatched a plot to take his revenge, the governor’s brother having been slain in a sea fight with Drake. He finds that it is not so easy to outwit Sir Francis Drake.

The series is set at a time when England was not formally at war with Spain although the possibility that war might erupt at any time is ever-present. Drake’s plunderings of Spanish treasure ships were in theory private adventures and were in fact not too far removed from piracy but both Drake and the Queen (who supported his ventures) always had to be careful not to go too far. With the two countries being officially at peace many of the episodes are tales of diplomacy rather than war. This actually gives the writers more scope than straight-out war stories would have done. It’s also worth mentioning that Sir Francis Drake’s approach to diplomacy tends to be very proactive. For Drake diplomacy shades easily into espionage and can be a very exciting and very dangerous (and sometimes quite bloody) business. In this respect the concept of the series was thought out very well - it can be considered to be more a spy series than a war action series.

Visit to Spain is typical of these episodes. Sending Drake as her official representative to a Spanish royal wedding is the kind of thing that is almost bound to result in adventure and quite possibly bloodshed, although the Queen may not have expected the adventure to go so far as the kidnapping of a princess. 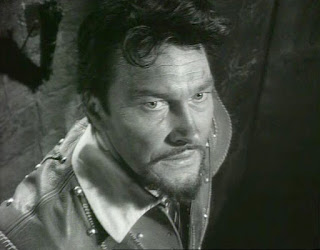 In Boy Jack the Queen sends a very young courtier on a delicate diplomatic mission. The mission might have gone very wrong had it not been for Captain Drake’s presence.

The Spanish are portrayed without exception as cruel, violent, treacherous and also remarkably inept. The anti-Spanish tone is rather startling. The Spanish attempt to invade England was after all four hundred years in the past. I can only assume that the producers meant us to see the Spanish as stand-ins for a much more recent enemy - the Nazis. Or that the somewhat authoritarian Philip II of Spain was meant to remind us of modern dictators like Hitler and Stalin, which seems a little unfair to Philip II!

A major asset to this series is the very strong supporting cast. Jean Kent is a glamorous but shrewd and slightly coquettish Queen Elizabeth. Roger Delgado plays the wily, scheming and totally perfidious Spanish Ambassador Mendoza as an out-and-out melodrama villain and his performances are a delight. Actually Delgado is used as an all-purpose Spanish villain, playing a Spanish governor in The Governor’s Revenge.

Terence Morgan makes a very solid hero. He perhaps doesn’t quite convey the large-than-life quality of a man who became a legend but he does capture the right blend of daring and sometimes insane risk-taking and he plays the rôle with a bit of a twinkle in his eye which is I think the right way to approach it.

Don’t expect too much in the way of historical accuracy from this series. This is escapist adventure fun not a history lesson.