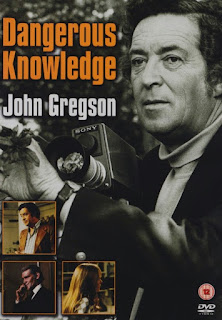 Dangerous Knowledge is a fairly gritty six-part mystery thriller serial made by Britain’s Southern Television and originally broadcast in 1976.

Bill Kirby (John Gregson) has been in France on business and is returning to England. He wants to leave the car ferry unobtrusively and attaches himself to Laura Marshall (Prunella Ransome). He attaches himself in a rather obvious way but Laura is more amused than concerned.

Kirby’s later explanations to Laura, after they reach her luxurious cabin cruiser (although it’s actually Daddy’s cabin cruiser), are evasive to say the least. He tells her that he is an insurance salesman but he was in France for unspecified private business - all he tells her is that there are different kinds of insurance and that he has obtained some information that may be valuable. The viewer is entitled to suspect at this point that Kirby’s business in France may not have been entirely kosher. As Laura remarks, it could be anything from industrial espionage to blackmail. And Bill Kirby might be a crook, or an undercover cop, or a spy or possibly even an insurance salesman who has stumbled across something lucrative but dangerous.

This is a series that takes its time letting us know what is going on. We find out a little bit about Kirby in the second episode. He is divorced, the divorce was amicable, he is staying at his ex-wife’s house and he has money troubles. He also drinks rather a lot. 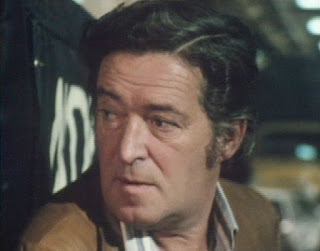 Kirby’s problem (or at least one of his several problems) is that he’s short of reliable allies. In fact it looks like Laura Marshall might be the only ally he has but it’s doubtful whether he can trust her either. Laura’s stepfather, Roger Fane (Patrick Allen), is a senior civil servant. It’s not entirely clear what he does but it seems to have something to do with security or counter-espionage. Fane seems to be rather interested in Bill Kirby.

By episode five we’re still not sure what is really going on, who are the good guys and who are the bad guys and what the motivations of the major characters might be. The mystery is maintained without resorting to willful obscurity. We’re not actually misled, we’re merely handed one piece of the jugsaw puzzle at a time.

The emphasis is on atmosphere and tension, and a considerable degree of 1970s paranoia, rather than action.

John Gregson had a reasonably successful film career in the 50s. By the 60s he was working mostly in television, with considerable success. He starred in the hit cop show Gideon’s Way. Tragically he died suddenly at 56 shortly after filming Dangerous Knowledge. Gregson was perhaps getting a bit old, and a bit portly, to be starring in thrillers by this time but then that’s really the point of the series - Kirby really is too old to be getting mixed up in these sorts of activities but he needs money badly and he had no idea it would turn out to be this dangerous. Gregson does an effective job. He’s gruff and grizzled and cynical but sympathetic as well. At the same time we’re not entirely confident that he’s an honourable man. We like him but he could be a hero or a rogue, or even an out-and-out villain. 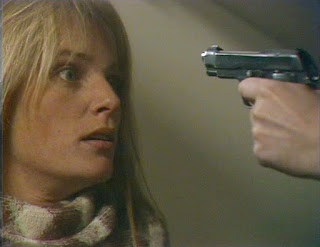 Prunella Ransome is very good as Laura. Laura is a woman who is not sure where her sympathies should lie or where they actually do lie. Ransome doesn’t try to play her as a femme fatale. She’s simply a reasonably intelligent woman thrust into a situation where she’s out of her depth.

Patrick Allen is perfectly cast. He could play smooth villains or trusted authority figures with equal assurance and he’s suitably enigmatic here in his portrayal of Roger Fane.

Ralph Bates (best remembered for his appearances in some extremely interesting early 70s Hammer films) as Sanders makes a surprisingly good heavy. He gets virtually no dialogue. Mostly he just looks menacing but in an ambiguous way, as if he could be a cold-blooded hitman or an equally cold-blooded spy or undercover cop. He does the menacing part extremely well.

Producer-director Alan Gibson did a great deal of television work but also directed a couple of Hammer horror films - the notorious Dracula A.D. 1972 and the underrated The Satanic Rites of Dracula. He also directed the obscure but interesting Goodbye Gemini. 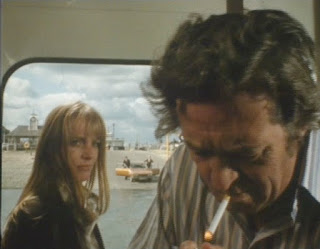 N.J. Crisp’s career as a television writer was prolific and varied. He wrote all six half-hour episodes and his scripts are literate and cunningly contrived to keep us guessing. What’s particularly impressive is that he does this without over-complicating the plot. The main plot outline is quite straightforward, if only we could be sure who is betraying whom and why.

Simply Home Entertainment’s Region 2 DVD release is a single disc without any extras. The transfers are however very good. There's also a Region 1 DVD, from VCI.

Dangerous Knowledge is typical of the best British television of its type of the 60s and 70s, fairly low-key and slow-burning but tense and absorbing. It’s well-written and extremely well-acted. Highly recommended.