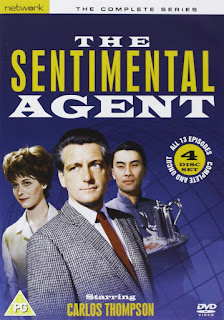 The Sentimental Agent (a spin-off from another ITC series, Man of the World) is a slightly unusual 1963 British adventure series. It’s unusual because the protagonist is not a cop, a spy, a private eye or a playboy amateur crime-fighter. He’s just a businessman. Carlos Varela (Carlos Thompson) runs a successful import-export business. In the course of running this business he becomes involved in various adventures, some of which do involve crime or espionage although others are more in the nature of commercial intrigues.

The most famous of all import-export agents was of course a certain James Bond although for Bond it was merely a cover. It’s not a cover for Carlos Varela. It’s how he makes his living. He’s not interested in espionage or counter-espionage but there are times when he isn’t given any alternative.

The Sentimental Agent’s biggest single plus is its star. Carlos Thompson has an air of the exotic (he was ethnically German but born in Argentina and has a slight accent), he has charisma and he has style. He has lots and lots of style. Carlos Varela makes Simon Templar look like an unsophisticated hick. Thompson also has no trouble at all trading witty dialogue with anyone.

And did I mention that Varela drives an Aston Martin DB5? Yes, the same car James Bond drives in Goldfinger, but Varela got to drive it a year before Goldfinger came out.

Unfortunately even though Carlos Thompson is the series’ main asset he was eased out towards the end of the season and does not appear in several of the later episodes, being replaced by an somewhat unmemorable character, Bill Randall (played by somewhat unmemorable actor John Turner).

Carlos Thompson gets some excellent support from Burt Kwouk who plays Varela’s gentleman’s gentleman Chin, a most useful servant although something of a tyrant when it comes to his master’s wardrobe. As the series progresses we find that Chin is considerable more than just a valet - he’s a versatile and invaluable assistant who seems to be able to turn his hand to anything. He also has an endless supply of cousins, all of them possessing remarkably useful skills. Burt Kwouk gets to display his considerable comic gifts and seems to be having a lot of fun (and judging by the interview with him included in the DVD set he really did enjoy making the series a great deal). 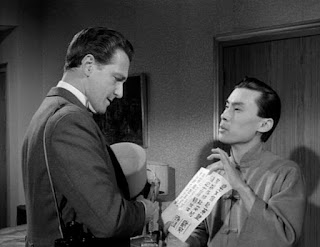 The series gets off to a great start with All That Jazz, a real spy thriller story and done with enough flair to make it both fresh and amusing. Varela has a slight problem - a consignment of goods has been held up at London Airport. The consignment in question is a modern jazz quintet. MI5 has reason to believe the beatnik musicians are mixed up in an espionage operation although they have no evidence and no idea as to how the secrets in question are being passed to a foreign power. They persuade Varela (or rather they give him no choice in the matter) to help them to solve this puzzle. The solving of the puzzle is rather clever. Julian Bond’s script combines a genuinely good spy story with some gentle humour and the episode establishes Varela as a debonair and charming hero.

The Beneficiary is a reasonably well done story about a dead man and the key to a safety deposit box in Lisbon. There’s nothing startling about the plot but some splendid guest starring turns (especially by Derek Francis and Aubrey Morris) make it entertaining.

Express Delivery is a very nice little Cold War spy thriller story. Carlos is in Poland for a trade fair but he seems to be attracting a lot of attention from the police. Then he’s approached by a beautiful Polish girl named Katrina in the hotel bar. She wants him to help her escape to the West, but is it as simple as that? Having much of the action take place on a train is a definite bonus - trains are such perfect settings for this kind of story. Also helping to make this episode a delight are Patrick Magee as a Polish spymaster plus Ann Bell’s quirky performance as Katrina (in fact the whole supporting cast is excellent).

A Very Desirable Plot shows this series at its best. A shady real estate developer is selling plots of land in the Bahamas. The only problem is that the plots of land are more or less underwater. Carlos Varela had made a deal, in good faith, to supply prefabricated houses to be erected on these plots. A great many people stand to lose their life’s savings while Carlos stands to lose a great deal of money and his good name. Carlos is a shrewd and hardheaded businessman but his success is based on his reputation for honesty and he also does not like to see decent people defrauded by crooked operators. There may be a way he can save his own reputation and the money of the unlucky investors but it’s going to take exquisite timing and a good deal of cunning. The highlights of this episode are guest appearances by the always delightful William Mervyn as a retired British army colonel and as his daughter a young unknown actress making her first screen appearance - the actress being Diana Rigg. 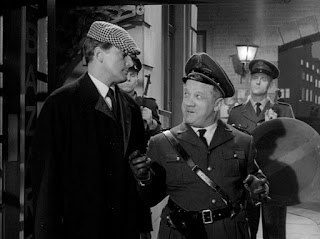 Never Play Cards with Strangers is a case of the biter bit. Carlos had arranged passage on a cruise ship for a middle-aged couple but their cruise was ruined by an encounter with a couple of unlikely card sharps. The shipping line can do nothing without evidence so Carlos decides to take action himself. He books a cabin on the liner, accompanied by the beautiful daughter of the couple who were fleeced. His plan is obviously to win back the money and teach the card cheats a lesson but there’s a snag - Carlos is a rank beginner at bridge. Luckily Chin has yet another cousin who is a croupier in Vegas and who has taught him all the tricks. Card games can always be used, whether in fiction or movies or TV, as excellent arenas for a battle of nerves between the hero and the villain and it’s a technique that works extremely well in this episode. James Bond fans will be delighted that Carlos’s final coup at the card table is something he learnt from Ian Fleming’s Moonraker, a copy of which he just happens to have on him. An excellent episode.

May the Saints Preserve Us is a delightful romp. A rich Texan girl wants Carlos to export something from Ireland to Texas for her - a castle. For some reason the locals don’t seem too happy about his. Carlos suspects the castle is connected with the smuggling of whisky. He’s half right. Something is being smuggled, but it isn’t whisky. This is pure farce but it’s great fun. We also get to hear Carlos attempting both a Texan accent and a French accent.

The Scroll of Islam is a solid episode that sees Carlos inadvertently caught up in the theft of an ancient scroll from a desert sheikhdom. Patrick Troughton makes a rather good sheikh. He is, like Carlos, shrewd but scrupulously honest and their mutual respect may be  the only thing that can avert disaster.

The Height of Fashion is one the episodes featuring Bill Randall rather than Carlos Varela. Varela is supposedly overseas and Randall has to deal with a perplexing problem - what to do with 30,000 horse blankets. They had been ordered by a small Central Asia country for their cavalry horses but now there’s been a revolution and the cavalry has been disbanded. The horse blankets are almost impossible to get rid of, being of a very small size and intended for very small horses. Randall’s attempts to dispose of this unwanted shipment end up involving vintage cars, high fashion and a royal wedding. This is lightweight stuff but it does have its gently amusing moments and it does give Burt Kwouk a chance to shine. Not much substance here but it has a certain charm. 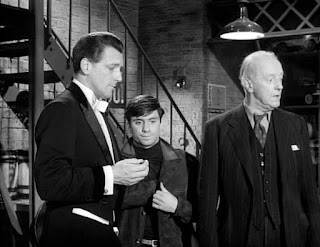 Finishing School, another Bill Randall episode, is even more slight. A girl has been kidnapped from an exclusive girls’ finishing school. The principal, Lady Graffham, is an old friend of Carlos Varela’s but Carlos is in New York so Randall has to step into the breach. Lady Graffham is desperately anxious to avoid a scandal while Randall is inclined to find the whole story a bit suspect. The kidnapping turns out to have an unexpected motor racing connection. This one is a bit like a lesser episode of The Saint, and it’s the sort of thing that Roger Moore could carry off but alas John Turner is no Roger Moore.

Not Quite Fully Covered is the third and probably the best of the Bill Randall episodes. This time it’s a matter of an insurance claim in respect of a very valuable collection of French antique furniture which someone wants to remove from a foreign country without the government of that country knowing about it.

The are two problems with the Bill Randall episodes. The first is that the tone is too jokey. The basic premise of this series is fairly slight to begin with and if the stories are played too much for laughs the whole thing is in danger of becoming just a bit too silly. The second problem is quite simply the absence of Carlos Thompson. In Carlos Thompson they had a winner - an actor with genuine star quality who knew exactly how to tread the thin line between lighthearted witty fun and mere silliness.

While the three Bill Randall episodes are a bit of a let-down this series taken as a while really is a delight. There is action  and adventure (and there’s at least one perfectly fine spy story here) but overall the emphasis is on whimsical fun. That can be dangerous to attempt. The tone has to be just right. If you overdo it or underdo it disaster will result. Happily The Sentimental Agent consistently hits just the right note.

Mention must be made of the truly bizarre theme tune. It sort of grows on you. Sort of.

If you’re looking for a straightforward action adventure series this is not it. However if you don’t mind wit, whimsy and light-hearted fun you should thoroughly enjoy The Sentimental Agent. Carlos Thompson’s performances are the main attraction and they’re good enough to make this must-see television and Network’s DVD set offers excellent transfers. Highly recommended.
Posted by dfordoom at 00:07