The Rivals of Sherlock Holmes - the Martin Hewitt episodes 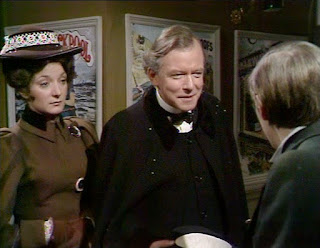 Of the many late Victorian writers of detective fiction who followed in the footsteps of Sir Arthur Conan Doyle the most consistently brilliant was Arthur Morrison. His main series detective was Martin Hewitt. The first season of Thames TV's  The Rivals of Sherlock Holmes television series in 1971 featured two adaptations of Martin Hewitt stories.

Both episodes feature Peter Barkworth as Martin Hewitt.  Martin Hewitt as portrayed by Barkworth is perhaps a little more colourful and jovial than in the original stories (although Morrison’s Hewitt is amiable enough) but overall his performance is a delight.

The Case of Laker, Absconded is one of the best of Morrison’s detective stories and happily the TV adaptation is every bit as good. Hewitt has just landed a contract with an insurance company to investigate cases of fraud, embezzlement or other crimes and now the insurance company is facing a very large pay-out. A walk clerk employed by a bank, a man by the name of Laker, has absconded with no less than fifteen thousand pounds in cash. A walk clerk’s job is to go around to other banks to change securities into cash. It’s a very responsible job and such employees are usually considered to be extremely trustworthy. Laker has always had a reputation for being honest and reliable but the evidence against him is overwhelming. 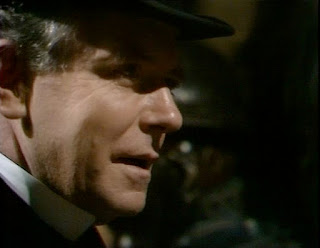 What puzzles Hewitt is how such a man could have been so foolish as to make off with such a large sum of the bank’s money and then buy a tourist ticket to France in his own name.

Even more puzzling is the fact that Laker’s fiancée assures Hewitt that Laker is a clever young man.

This is a fine complex mystery with some very impressive detective work by Martin Hewitt.

The Affair of the Tortoise involves a tortoise, in fact two tortoises although of very different types, a voodoo curse, a retired sea captain, a troublesome tenant and a beautiful heiress. It also involves a murder although the absence of a body provides something of a puzzle. It’s a delightfully baroque plot and it’s executed with great deal of style and verve. 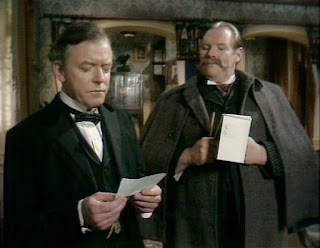 Peter Barkworth is in fine form. Martin Hewitt makes a wonderful detective hero - he’s clever, resourceful and determined and he’s a decent and thoroughly admirable man. He’s fascinated by murder but he seems to derive as much pleasure from proving a suspect’s innocence as he does from solving a complex puzzle.

The Case of Laker, Absconded and The Affair of the Tortoise are two of the most thoroughly enjoyable episodes in a truly wonderful series. Very highly recommended.

Network have released both seasons of The Rivals of Sherlock Holmes on DVD. They are essential viewing for all fans of classy television crime series, and indeed for fans of Victorian and Edwardian detective fiction.

My review of Arthur Morrison’s Martin Hewitt stories can be found at my Vintage Pop Fictions blog.