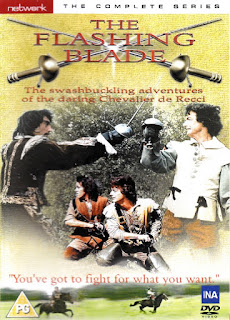 Le chevalier Tempête was a 1967 French historical adventure TV serial. It was dubbed into English by the BBC and screened, with some success, as The Flashing Blade.

It is set in 1630, during the Thirty Years War. The French garrison of Casal has been besieged by a large Spanish army. The garrison is hopelessly outnumbered, food and ammunition are running very short, the surviving soldiers are exhausted and on the verge of demoralisation. Only the steely determination, and the harsh discipline, of the French commanding officer, Thoiras, has allowed the French to hold out this long but the end is certainly approaching.

There is a buzz of excitement when a French officer penetrates the Spanish lines (leaving mayhem behind him) and makes it into the fortress of Casal. Perhaps he is a messenger bringing news that a relieving force is on its way. Alas it turns out that it is merely the young, hot-headed and totally undisciplined Chevalier Recci (Robert Etcheverry) who has decided it would be a fine adventure to join in the heroic defence of Casal. He was is a little taken aback when Thoiras does not seem to be terribly delighted by his grand gesture.

Within hours of his arrival the impetuous young chevalier has taken it into his head to start waging his own one-man war against the Spanish. He leads a daring sortie and returns to Casal with a wagon loaded with food and ammunition. Unfortunately he neglected to ask Thoiras for permission to conduct his raid and instead of being congratulated he faces a court-martial and is condemned to death. There is however one way in which he can escape execution - by undertaking an almost impossible and breathtakingly dangerous secret mission. He must escape from the fortress, slip through the Spanish lines, traverse two hundred miles of Spanish-occupied territory, make contact with a series of French agents and finally reach the commander of the main French army and persuade him to send a force to the relief of Casal. In the unlikely event that Recci succeeds in this bold venture Casal might be saved. 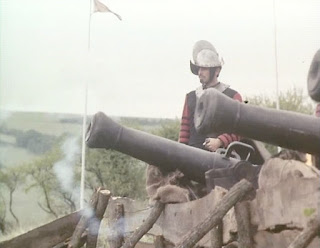 This serial is therefore not just an historical adventure but a kind of spy thriller as well, with Recci having to hide his identity while carrying out his secret mission deep behind enemy lines, accompanied by his faithful valet.

That mission turns out to be even more difficult than he’d anticipated. There’s a Spanish officer who has discovered Recci’s secret and he’s on his trail, and he has the remorselessness of a hunting dog.

There is of course time for some romance. At one point Recci manages to get himself captured by bandits. The bandits have also captured the Duke of Sospel and the duke’s proud, imperious but extremely courageous daughter Isabelle (Geneviève Casile). The dashing young chevalier and the young noblewoman do not hit it off at first but they slowly come to develop a certain mutual respect, and a certain mutual affection that we have reason to suspect will blossom into romance.

Of course it’s always difficult to judge the acting in a dubbed movie or TV series but the performances are certainly energetic. Robert Etcheverry certainly looks the part as the hero.

One of the more pleasing surprises to this series is that the BBC really did a fine job with the English dubbing. The voice actors (who sadly don’t get any onscreen credits) are well cast and they approach their task with real zest. 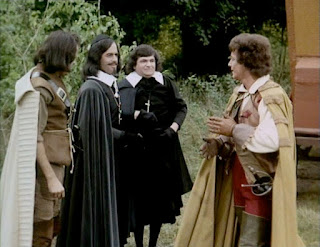 The Chevalier Recci is a fine storybook hero, headstrong to the point of foolhardiness but outrageously brave and with an old-fashioned sense of honour. He is impetuous without coming across merely as a young idiot. Isabelle de Sospel is, for a 1967 TV series, a delightfully old-fashioned heroine. She is accustomed to being obeyed without question and to being treated with a very high degree of obsequiousness. Her courage and her usefulness in a crisis come from her arrogance. She simply refuses to admit the possibility that anyone would dare to place an obstacle in her way. She’s a far cry from the average action adventure series heroine of that era, but she demands our respect.

The most entertaining character is Mazarin, at this time an Italian diplomat in the service of the Pope although he would of course go on to gain a cardinal’s hat and be chief minister of France for many years. In this series Mazarin’s ambition, cunning and complete lack of scruples provide a good many moments of light comedy we also sense that despite his foppish and slightly foolish exterior he is a man whom it would be very foolish to underrate.

There's a fine villain in the person of the scheming and perfidious Don Alonzo (Mario Pilar) and he has an even more ruthless henchman, the evil Don Ricardo (Franck Estange). The Spanish are of course very much the villains. Don Alonzo might be unscrupulous but it has to be admitted that he is also a very brave man. 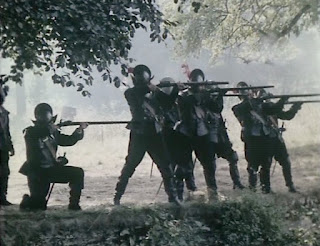 While this was intended as a kids’ adventure series it has a slightly more adult feel when compared to British TV adventure series like The Adventures of Sir Lancelot. It’s very much in the style of the classic French adventure novels of Dumas such as The Three Musketeers.

One odd aspect of the British version is that every time they tried to transmit the final episode they encountered such severe technical problems that the broadcasts had to be abandoned. As a result the final episode on the DVD release is the original French version with English sub-titles. This is interesting because it does give us a better chance to judge the quality of the acting. The final episode is a kind of epilogue - the main story actually concludes at the end of episode eleven.

By the standards of children’s television this is a fairly lavish production with some fine location shooting and some excellent action sequences. The siege scenes are impressive and there’s a pretty impressive full-scale battle scene.

Mention must be made of the rollicking theme song for the English-dubbed version.

If you’re a fan of adventure tales in the spirit of The Three Musketeers then this series will be right up your alley. It really is great action-filled fun with a strong romantic sub-plot and a nice leavening of humour. Highly recommended.
Posted by dfordoom at 06:21