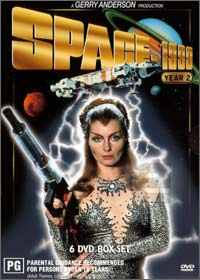 Space: 1999 was both the most ambitious and most expensive of all Gerry Anderson’s science fiction TV series. The first season did pretty well and in normal circumstances a second season would have followed automatically. Unfortunately there were dark clouds on the horizon for the series. Lew Grade was losing interest in television and was all set to embark on his disastrous foray into feature films, a misadventure that would quickly swallow up all of ITC’s money and resources. Gerry and Sylvia Anderson’s marriage was falling apart. Barry Morse refused point-blank to even consider returning for a second season. And the first season had run into major budgetary problems.

The second season finally got the green light but there would be noticeable changes, and it’s those changes that tend to divide fans.

American Fred Freiberger was brought in as producer to replace Sylvia Anderson (her marriage to Gerry Anderson having come to an end by this point). Freiberger wanted a more action-oriented feel with more emphasis on humour and on the emotions of the character in place of what he felt was the excessively cosmic and philosophical preoccupations of the first season. His new approach was not welcomed by either the cast or the crew. Martin Landau was particularly unhappy with the scripts for Year 2.

The second season definitely saw a move towards more melodramatic plots. While some episodes are very entertaining in general the second season seems to have fewer genuinely interesting science fictional ideas than the first.

To replace Barry Morse as the show’s resident science expert a new character was introduced, Maya, played by Catherine Schell. Maya is a shape-shifting alien, and her presence in the series pushed the series into fantasy territory and away from the at least vaguely plausible science fiction that had characterised all of Anderson’s earlier series. The necessity to make use of Maya’s shape-shifting abilities also weakens some of the stories. An alien with the ability to take the form of any living creature provided a temptation to writers to use her as a magical means of getting out of plot difficulties (a bit like the over-use of the dreaded sonic screwdriver in some season of Doctor Who). 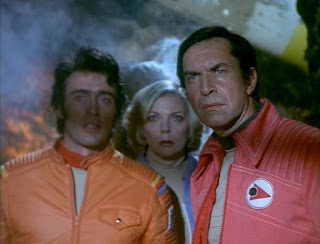 It’s not that there’s anything actually wrong with Catherine Schell’s performance but her character just seems out of place. Barbara Bain was apparently not very pleased by the inclusion of another major female character, especially one played by an actress as glamorous as Catherine Schell. It has to be said that the episode which introduces Maya, The Metamorph, is pretty good (and it does feature a wonderful guest starring performance by the great Brian Blessed).

The departure of Sylvia Anderson also caused difficulties. Her contribution towards the success of the couple’s earlier series has often been underestimated and after the divorce Gerry Anderson seemed to lose some of his creative spark. He was great with ideas and he was very good on the business and organisational side but not so comfortable with people. Sylvia was great with people and could be counted on to smooth over any personnel problems that arose. That’s why they were a great team. They were equally essential to the success of their programs.

The absence of Sylvia Anderson in Year 2 may also have explained why some opportunities were missed. Maya was potentially a fascinating character - the last survivor of her race now living among beings who were friendly and welcoming but who were, to her, aliens. Star Trek had made the most of Spock’s alienness but at least Spock’s species still existed. Maya had nobody left. This could have led to all sorts of emotional dramas and turmoils and misunderstandings. Instead of which Maya is treated as just another member of the crew, who just happens to have super-powers. One can’t help suspecting that Sylvia Anderson would have seen the potential there and pushed the writers to exploit it. 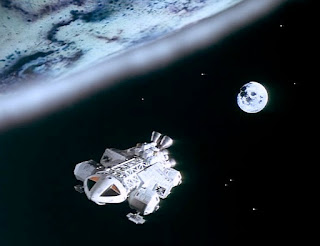 There were changes in the look of the series in Year 2 as well. The huge and very impressive Command Centre set was replaced by a much smaller and much more claustrophobic set; in fact the sets in general were smaller and more cramped. Budgetary constraints were partly to blame as the first season had proved to be very expensive indeed. More claustrophobic sets are not necessarily a problem but in this case they were since so much of the appeal of the show derived from its lavish visuals and extremely high production values. Year 2 unfortunately does look rather cheaper.

The first episode, The Metamorph, introduces Maya and it features Brian Blessed and it’s actually a pretty strong start for the season. After that there are episodes with interesting ideas, like The Seance Spectre. And a few very entertaining episodes, like The Devil's Planet which is yet another variation on Richard Connell’s classic story The Most Dangerous Game but Michael Winder’s script adds some genuinely new and effective twists.

The Immunity Syndrome is an episode that sums up the problems that afflict this second season. It starts with a very good idea. The crew of Moonbase Alpha find a planet that seems absolutely perfect as a new and permanent home for them. It seems to have everything they could possibly need. And then, for no apparent reason, the planet itself suddenly turns on them. This episode offers a reasonably effective blend of excitement and suspense. It’s all going so well and then we get to the ending which is uninspired and sentimental and generally disappointing. 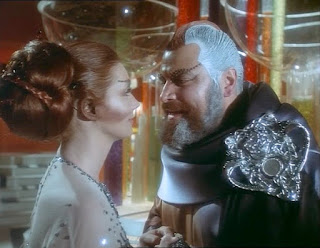 The Dorcons also has potential. Aliens wanting to steal Maya’s brain is a silly idea but writer Johnny Byrne does add some more substantial stuff. There’s an ethical dilemma - one person’s life to be measured against the possibility of great harm coming to millions. And the sub-plot of the depraved Caligula-like heir to the throne plotting against the wise old emperor is handled with a certain amount of nuance - the kindly wise old emperor (a very restrained and dignified performance by Patrick Troughton) isn’t really either very wise or very kindly, at best he’s the lesser of two evils. Gerry Sundquist gives a deliciously over-ripe performance as the depraved heir. Ann Firbank is also good as the imperial functionary Varda trying to do her best in difficult circumstances. Varda is another complex character, ruthless but honourable.

There’s almost enough good in this episode to compensate for the silly central idea but as so often in season two the script, potentially very good, doesn’t quite come together and the ending is a bit contrived.

When you get stories like this, that could have been excellent television but don’t quite make it because the script needed a bit more work, you start to suspect that maybe the producer isn’t getting the best out of his writers. Given that not everyone was happy with the job Fred Freiberger was doing as producer it’s tempting to conclude that he really wasn’t the right man for the job.

With all its faults the second season of Space: 1999 is not a complete loss. It has impressive visuals and it has plenty of action. Unfortunately it’s nowhere near up to the standards of the first season and it has much more of a conventional Monster of the Week kind of feel. Lew Grade’s fatal obsession with making movies doomed the show and the second season would be the last.
Posted by dfordoom at 05:59