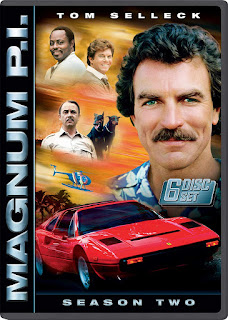 The second season of Magnum, P.I. originally screened in 1981-82. The cast is unchanged from the first season. Thomas Magnum still lives in the guest house of Robin Masters’ luxury Honolulu estate and still gets to drive Robin’s Ferrari, when Higgins (Robin’s majordomo) will let him. Once again we never actually see Robin Masters. He’s like a figure of legend. Magnum’s buddies from the Vietnam War Rick (Larry Manetti) and T.C. (Roger E. Mosley) are still regularly getting conned into helping out on cases. Higgins still tells interminable stories about the Second World War and still has his two Dobermans and the dogs still want to kill Magnum.

On the surface this is a standard private eye drama, albeit an extremely stylish one. There are however unexpected complexities and subtleties. There’s plenty of humour, there’s some fine writing, some emotional drama and most importantly all these elements are balanced perfectly. This series is enormous fun but it’s clever and intelligent fun. And it has its darker and more serious moments, and it’s not afraid to have the occasional downbeat ending.

Vietnam is an inescapable presence in this series. The war plays a major role in several episode plot lines. Magnum still has Vietnam-related nightmares. For T.C. and Rick it’s obvious that the war is something that they have also never quite gotten over.

It’s also worth pointing out that Higgins is a veteran as well, of World War 2. And there are hints that he also has found that the experience of war is something that stays with you. Every now and then when he’s recounting one of his tales of glorious adventure with the Desert Rats you’ll see a flash of genuine pain and you realise that his stories are more than mere bombast, that he saw terrible things and hasn’t forgotten them.

It’s interesting to note how differently Higgins deals with this. He talks about the war constantly, and still sees it as something glorious and honourable. Magnum and his buddies very rarely talk about it and never in terms of glory. But in their own ways they’re all trying to deal with life after war. That’s the one theme that runs continuously through this series, and makes it at times a bit more than just a private eye series.

Magnum’s relationship with Higgins is fascinating because it doesn’t develop they way you naturally expect it to. It starts with intense antagonism. Gradually a degree of mutual respect is built up. You expect that Magnum and Higgins will eventually develop some vague kind of mutual understanding. But it doesn’t happen. The antagonisms run too deep. Higgins cannot overcome his disapproval of what he sees as Magnum’s irresponsibility and frivolousness (and one can’t help suspecting he disapproves of Magnum’s decision to leave the Navy). Magnum for his part cannot get past his initial impression of Higgins as being too much like the type of pompous spit-and-polish regular officers he had undoubtedly encountered in the Navy. So despite occasional flashes of sympathy they continue to squabble and their squabbles remain as petty and childish as ever. 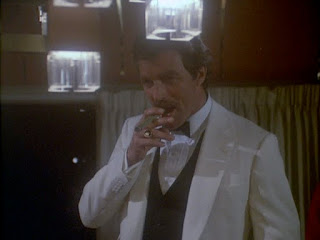 Tom Selleck as Thomas Magnum has a wonderful ability to switch gears from lighthearted fun to quite convincing moments of emotional pain. Magnum is a complex guy. He’s every bit as irresponsible and frivolous as Higgins thinks he is but he has a strong moral sense as well. In some ways he’s too moral to be a successful private eye.

Overall Magnum, P.I. is what you expect from a series with Donald P. Bellisario as co-creator and executive producer - it has both style and substance.

Billy Joe Bob hires Magnum to find his sister and Magnum is afraid of what he might actually find. A reasonable opening episode.

Dead Man’s Channel is an entertaining story of an archaeologist whose boat disappears. His daughter hires Thomas to find her father but it appears that he had disappeared in an area of water under an old Hawaiian curse. This is a good story.

In The Woman on the Beach Rick meets an absolutely amazing woman and falls hard for her. The only problem is that the woman has been dead for forty years. Magnum doesn’t believe in ghosts but it’s difficult to find a rational explanation. An excellent episode and a fine example of one of the strength of this series - the idea that the past can never be entirely escaped.

From Moscow to Maui is a routine spy drama about a Russian defector.

With Memories Are Forever we’re back to dealing with the past. This time Thomas is sure he’s seen a girl that he was crazy about him once but that can’t be because she’s dead. To complicate matters the Navy is also not going to let him get away from his past. One of the nest of the Vietnam-oriented episodes, and in fact one of the nest episodes of the season. 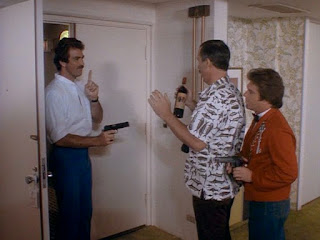 In Tropical Madness Higgins may have found love but could it be too good to be true?

Wave Goodbye concerns a surfer girl found dead. She wasn’t what you’d call an overly good or moral person but Magnum still feels very strongly that she didn’t deserve to die this way. A solid episode.

Mad Buck Gibson is a hell-raising writer whose ex-wife employs Magnum to keep him alive. Mostly he seems to need protection from himself. It takes a while for Magnum to figure out just what is driving Mad Buck Gibson. This one veers a bit close to sentimentality but it’s not bad.

The Taking of Dick McWilliams is a kidnapping case with some nasty twists. An OK episode.

Ghost Writer is about a woman ghost writing the biography of a man she’s never met. And someone is out to stop her. This one has a complex and effective plot although the main twist is not entirely unexpected.

In The Jororo Kill a female journalist hires Thomas to find a renegade MI6 agent. Thomas should have known better than to trust a journalist. This one has some contrived moments but some good action and suspense. 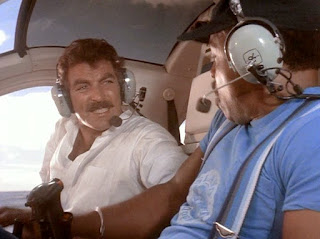 Computer Date lands Magnum in an awkward situation. He’s been hired to find out if a client’s wife has been playing around but it seems that she’s been playing around with Rick. To say that this puts a strain on his friendship with Rick is putting it mildly and there’s worse to come. A nicely tangled plot and a very satisfying episode.

Try To Remember deals with another classic Magnum theme - memory. Thomas sustains severe head injuries and the Ferrari is wrecked. That’s the least of his problems. The woman he’d been hired to find is dead, he’s the prime suspect and he can’t remember a thing that happened. Another very fine episode.

Italian Ice is a mixture of melodrama and farce. Thomas flies to Sicily to rescue a young woman from the mansion of a wealthy and wicked count. He soon has reason to wish he hasn’t volunteered for this job, as his romantic life collapses into chaos. The girl decides she’s madly in love with Magnum bat that’s just one of the nightmares he has to deal with. It’s a fatal attraction type of story and it’s done fairly well.

One More Summer is a football story so it’s almost incomprehensible to a non-American like myself. A star quarterback hires Magnum to protect him and Magnum has to go undercover a a member of the team. Magnum had been a pretty good player once but that was a long time ago. It’s a decent enough plot and an OK episode.

Texas Lightning is the nickname of high-stakes poker payer Jeannie Lowry in the episode of that title. She hires Magnum as bodyguard for a game on a yacht belonging to a billionaire. There’s certainly a high-stakes game about to be played but it isn’t poker. And Magnum is a player, whether he wants to be or not. His loyalties are also going to be sorely tested. A very good episode with some nice twists. 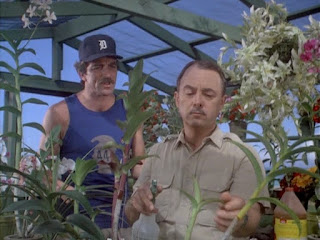 Double Jeopardy plunges Thomas into the bizarre world of Hollywood movie-making. The movie adaptation of Robin’s latest book is being shot partly on the estate. Magnum is persuaded to accept a job as stunt double to the star. He is also somewhat overawed by the leading lady Olivia Ross, being a long-time fan of hers. Being involved in the movie comes in handy when he has to investigate a shooting on set - a prop gun had been changed for a gun loaded with live ammunition. The plot twists aren’t too difficult to predict but it’s all done with style. His episode sees the return of Homicide cop Lieutenant Tanaka (played by Kwan Hi Lim) who would go on to appear in many future episodes, understandable enough since he’s a wonderful character. It’s a pretty solid episode.

In The Last Page Thomas thinks he’s helping a client to find his girlfriend but the client is looking for something else entirely. The client is a Vietnam vet for whom the war has never ended. He thinks he knows a way to put the war behind him but it’s a seriously bad idea and Thomas is going to have to try to prevent a tragedy. The Vietnam-centred stories always seem to be particularly effective and this is no exception.

There has to be an episode involving doubles. It was practically compulsory right through the 60, 70s and 80s. In The Elmo Ziller Story we discover that Higgins has an identical twin. Well actually he’s only a half-brother, but he’s an identical half-brother. His name is Elmo Ziller and he’s a Texas cowboy who runs a travelling rodeo and somebody is trying to kill him and steal the rodeo from his faithful daughter. Magnum doesn’t believe a word of it. He’s convinced that it really is Higgins, in disguise, although he can’t come up with a theory to explain why Higgins would want to do such an outlandish thing. But he’s still absolutely sure it’s Higgins. Well, fairly sure. And that’s what makes this one so much fun - is there a real Elmo Ziller? Is he alive? Is Higgins mixed up in some bizarre scheme? Magnum has to admit that he really doesn’t know, and we don’t know either, and it’s all great fun.

Three Minus Two takes Magnum into the world of fashion. Glamorous fashion designer Jan Kona (Jill St John) hires Magnum because it seems that someone is trying to kill her two business partners. The awkward part is that the person who stands to benefit most if the two partners are killed is Jan Kona. A solid mystery episode to round out the season, and it features a nice little skirmish in the continuing war between Magnum and Higgins.

Very much the formula as before and by this time it’s working like a well-oiled machine. Magnum, P.I. is dumb enough to be great fun and smart enough to keep audiences on their toes. Superb entertainment. Highly recommended.
I've review the first season of Magnum, P.I. as well.