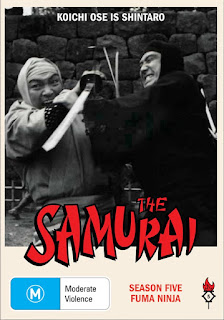 Onmitsu kenshi (given the English language title The Samurai) which was produced between 1962 and 1965 is a landmark in television adventure series aimed at younger viewers. It raised the bar to an immense degree. It also played a very significant rôle in introducing Japanese pop culture to the West. And in Australia it became an extraordinary pop culture phenomenon.

This series was so successful for a number of reasons but the main one was, it was simply a whole lot better than contemporary American and British TV programming aimed at the same audience. It moved a lot faster. It was much more exciting. It was visually imaginative. The action sequences were clever and innovative. The sword fights are like nothing audiences had seen before. The camerawork was more dynamic. The storylines were more complex and more intelligent. It didn’t patronise its audience. It assumed they could deal with concepts like the triumph of good coming at a high price, and that they could deal with the idea that goods guys sometimes pay the ultimate price. There was nothing nihilistic about it, it was simply realistic in accepting that bad things can’t be wished away. They have to be struggled against. It was enormously popular with kids (including yours truly) but it was sophisticated enough that adult viewers can enjoy it as a stylish action adventure series.

Compared to contemporary British and American adventure series pitched at younger audiences The Samurai can be quite dark. The good guys might win but they won’t all survive and it can be a close-run thing. And victory is never permanent.

The Samurai’s format, with 13-episode story arcs, obviously allows fairly complex story-telling. Fuma. Fuma NInja (Ninpō Fūma Ichizoku) is the fifth such story arc, broadcast in Japan in 1963 and in Australia in 1965. It’s possibly the best of all the story arcs.

It is 1789, in the days of the Tokugawa Shogunate. 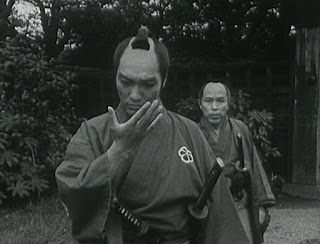 Edo is the seat of the Shogun’s government and the castle is extremely well defended, not just by regular guards but also by a large force of Iga Ninja, led by Tombei the Mist. In the world of this television series there are good ninja and there are bad ninja. The Iga Ninja are good ninja, brave and honourable and loyal. But the castle is under threat from some very bad ninja, the Fuma Ninja. Tombei knows something very bad is brewing but at first he has no idea what it is.

He does know that he is going to need some help from his old friend Shintaro, the legendary swordsman and samurai (and government secret agent).

The really puzzling and worrying thing in all of this is that the Fuma Ninja were all wiped out two hundred years earlier. How can they have come back? Whatever the explanation, they are back and they’re plotting something big. It concerns three mirrors, mirrors that have symbolic importance but that may also have some kind of supernatural or paranormal power. The Fuma Ninja are determined to get the mirrors and they’re prepared to kill anyone who gets in their way.

Shintaro’s sidekick is Tombei the Mist, but Tombei is not exactly a sidekick. He’s very much a hero in his own right, and his martial skills and his cunning are only slightly inferior to Shintaro’s. He is more an ally than a sidekick. There’s almost a buddy movie thing going - there is a strong friendship and complete trust between the two men. In this story cycle both men will face dangers greater than ever before.

This story cycle introduces a couple of slightly unexpected elements. Shintaro loses a sword fight. And there’s perhaps just the slightest hint of romance, or at least a hint that Shintaro is not entirely indifferent to the feminine sex. He is wounded and is nursed back to health by a charming and rather pretty young lady. He recovers his health completely, but the woman is still there. Shintaro is prepared to risk his life to keep her safe. Of course he owes her a debt, and of course he’d risk his life to protect any woman in danger. But he does seem very fond of her. 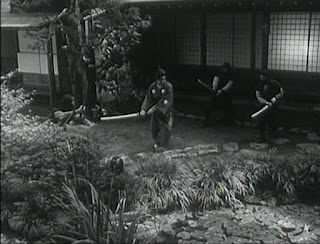 This story arc also features the series’ most memorable villain, the formidable and sinister Fuma Kotarō.

It also features lots of gadgets! Gadgets appear in other story arcs but this one features the awesome Fuma Dragon Ship. There are also the spider ninjas who are very cool, and very sinister. And the Iga Ninja meeting house, packed to the rafters with secret doors and other nasty surprises for the unwary. And, in case all that isn’t enough, there’s a sexy bad girl lady ninja.

There’s more glamour than usual. There’s also a beautiful princess. Shintaro gets lots of opportunities to demonstrate his chivalry.

Fuma Ninja also has a much greater sense of menace than other story arcs. The odds really do seem to be stacked against Shintaro and Tombei and they suffer a series of devastating disasters.

Interestingly enough a Christian convent plays an important part in this story and Shintaro finds himself with a nun who has to be protected. It’s no surprise that Shintaro, very much the gentleman, behaves with respect towards the Christian religion.

The fight scenes seem particular dynamic in this arc, and they’re also somewhat more violent than anything you’d see in British or American series of this type. These are fights to the death. There’s also, in one instalment, a double fight - two separate fights, both desperate, occurring miles apart at the same moment and there’s constant intercutting between them. You just aren’t going to see ambitious stuff like this on British or American kids’ shows of the era. And there’s the sword fight on the ceiling. There’s a constant attempt to keep the action scenes exciting and interesting. 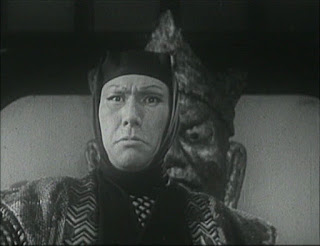 There’s a bit of subtlety and character complexity in Fuma Ninja as well. The lady ninja is a superb warrior, except for one thing. She cannot entirely repress her emotions. When she’s put in a situation in which the rational thing to do is to kill a witness she can’t do it because she just can’t kill an innocent woman.  There are complex conflicts of loyalty, and there’s the ever-present difficulty of squaring loyalty with honour.

There’s perhaps a bit more nuance to Shintaro as well. He not only loses a sword fight, he makes mistakes. At times Fuma Kotarō out-thinks him. Of course there are also times when Shintaro out-thinks Fuma Kotarō. This is a life-and-death struggle not just between two great warriors but between two very clever men, but while they’re both clever neither is infallible.

Special mention should be made of Hirooki Ogawa’s excellent music for the series, a blend of Japanese and western influences.

It’s hard to judget the acting since I’ve only ever seen the English dubbed version but what can be said is that Kôichi Ôse as Shintaro and Fuyukichi Maki as Tombei have the necessary screen presence required of heroes whilst the actors playing the villains certainly have more than enough of the screen presence that villains require.

The Samurai is one of the great TV action adventure series and you don’t have to be a kid to enjoy it. And Fuma Ninja is this series at its best. Very highly recommended.