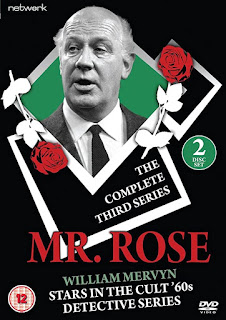 Mr Rose was a British crime series made by Granada Television in 1967-68. It was created by Philip Mackie who was involved as creator or writer with some of the most interesting British television series of the ’60s and ’70s such as The Rivals of Sherlock Holmes, The Caesars and Raffles.

Chief Inspector Charles Rose (played by William Mervyn) first made his appearance in 1963 as a supporting character in the third season of a detective series called The Odd Man. He was popular enough to be featured as the central character in a spin-off series, It’s Dark Outside, made in 1964-65. It’s Dark Outside then spawned a further spin-off series, Mr Rose, three seasons of which were produced in 1967 and 1968.

In The Odd Man and It’s Dark Outside Chief Inspector Rose was pompous, high-handed and sometimes rather prickly. For the Mr Rose series the character was softened somewhat, but he was softened without becoming bland. In fact he becomes rather more interesting. The slight personality change did make some sense since Rose was now living in comfortable (very comfortable) retirement, at work on his memoirs. He is as pompous as ever but, freed from the stresses and strains of his police duties, he is more relaxed and even amiable. And his eccentricities, already present, have blossomed.

In the first season he was living in Eastbourne with his manservant/chauffeur/assistant John Halifax (Donald Webster) and his secretary Drusilla Lamb (Gillian Lewis). That first season feature some of the most delightful ensemble acting you could ever wish to see. The three characters complement one another perfectly. Mr Rose is upper class with the arrogance self-assurance of his class, but he can be charming and fascinating. Halifax is working class and is in fact an ex-criminal. Miss Lamb is middle class and takes life very seriously. Halifax is devoted to him. Miss Lamb disapproves of Mr Rose’s laziness and self-indulgence and his whimsical attitudes towards the law. All three characters are, in their very different ways, extremely likeable. And the three leading players play off each other superbly. The result was some of the best British television of the ’60s. 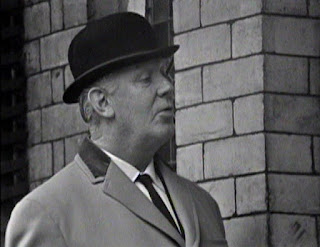 While he is now retired Mr Rose has by no means lost his taste for crime-solving. He is not a private detective but is now a kind of consulting detective in the Sherlock Holmes mould but on an amateur basis. Crime-solving is for Charles Rose a welcome diversion from the tedious grind of memoir-writing. The fact that he is writing his memoirs does however serve as useful leverage in a number of his cases.

Unfortunately Gillian Lewis departed after the thirteen episodes of the first season. It was a blow from which the series never quite recovered because the three characters had formed a perfect balance. Nonetheless a second season of six episodes, with Mr Rose relocated to London, followed in mid-1968. Donald Webster then left and a third and final season of five episodes screened in late 1968. That third season has its moments but the loss of Webster was a fatal blow.

Mr Rose gains a new assistant in the person of Robert Trent (Eric Woofe). In the first episode he seems rather obnoxious but after that he settles down. The problem is that he’s too much like a younger Mr Rose.

In The Less-Than-Iron-Duke Mr Rose goes to the assistance of an old flame, theatrical legend Sheena Coltman, who has just opened a night-club and is being pressured to pay protection money. It appears that the man behind the protection racket is a rising star in the local organised crime world, a nasty piece of work named Eddie Rice. Mr Rose decides to fight crime with crime by persuading Harry Duke, the former gangland kingpin and know to everyone as The Duke, to deal with Eddie. But will The Duke agree to such a proposal? 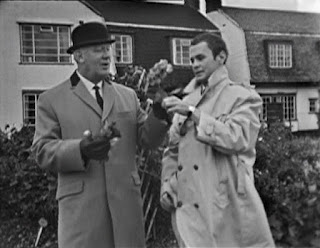 The Bogey Man has a promising setup. Mr Rose witnesses a fatal traffic accident. He recognises the victim as a man named Saunders, whose is (or was) ironically traffic expert. Except that it turns out that the victim isn’t Saunders, it’s someone else entirely, but Mr Rose insists that it really is Saunders. The possibility that he might be mistaken is one that he is not prepared to entertain. There’s not just a question of identity, but also one of dates. And there’s a police sergeant who might not be a police sergeant, and there are two widows. There’s a murder that might not be a murder, or perhaps there are two murders, or even more. It’s all very baffling.

The Missing Chapter is a chapter from the next volume of Mr Rose’s memoirs. The story all involves a large amount of money withdrawn from the bank by Mr Rose, a visit to the racetrack, a mysterious telephone call from a glamorous blonde and some strange behaviour by Rose’s friend publisher Nigel Chinnery. The plot is less complex than it sounds but it’s entertainingly embellished by the amateur detective efforts by Robert and by Mr Rose’s new secretary, the detective story-obsessed Miss Tait-Fairlie.

In The Jolly Good Fellow Mr Rose is to be made a Fellow of St Stephen’s College. The college is about to be presented with a rather valuable painting. It already owns a priceless painting, and Mr Rose is more than a little concerned about the non-existent security arrangements. It’s Rag Week and Mr Rose has already been the victim of one of the good-natured pranks the students get up to at this time, all in the interests of charity. Mr Rose is kidnapped by some rather likeable undergraduates and as his ransom cheerfully hands over a cheque to a local charity. But are all the pranks being planned by the students so harmless? 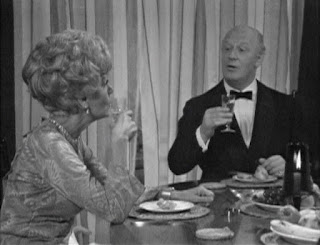 Free and Easy is a bit of a mess. Mr Rose has written a play but both the director and the star, an actor named Marcus Despard who looks remarkably like Mr Rose (and is in fact played by William Mervyn), have tampered with the ending. Rose is not pleased.

This episode seems to be an attempt at political satire with some scare stuff about neo-fascist plots (a positive obsession with both British and American television at the time). It’s all too clever by half and doesn’t make a great deal of sense.

The third season isn’t as bad as I’d feared but it is a bit disappointing. The dynamic between Chief Inspector Rose and Robert Trent just doesn’t have the nuances that made his relationships with John Halifax and Miss Lamb so interesting and so delightful. This is perhaps the major weakness. In the earlier seasons the interplay between the leads made even the lesser episodes thoroughly enjoyable. In this third season the uninteresting dynamic between the two leads makes the faults of the lesser episodes more obvious.

I’ve previously reviewed both the first season (by far the best) and the second season.

My advice is to buy the complete series set from Network which includes all three seasons. If you love the first two you’ll end up giving the final season a spin as well. If you’ve bought the individual season sets of seasons one and two then don’t bother with the third season unless you’re thoroughly hooked on the series.
Posted by dfordoom at 23:38