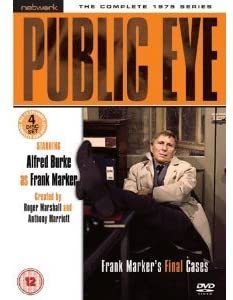 Public Eye was an unlikely television success story with an even more unlikely star. This series chronicling the career of downmarket private eye Frank Marker was made initially by Britain’s ABC Television and later by Thames Television. Seven seasons were made over a period of ten years from 1965 to 1975.

A few months before the seventh season went to air The Sweeney arrived on British television screens and things were never the same again. The Sweeney was shot on film, mostly on location, and with non-stop action and violence. Public Eye, shot on videotape and possibly the most low-key crime series ever made and with virtually zero action and violence, must have seemed like an anachronism by comparison. Despite this Public Eye continued to be immensely popular. There were plans to make an eighth season, shot on film, but star Alfred Burke felt (almost certainly correctly) that the change to film would destroy the series’ distinctive flavour.

Public Eye in fact had looked even better in its earlier seasons shot in black-and-white. It looked seedy, grimy, claustrophobic and down-at-heel but that’s exactly what Frank Marker’s life is like. He’s a private enquiry agent (the British name for a private detective) and he’s the least glamorous screen private eye in history. He doesn’t handle murders and jewel robberies. His cases are the kinds of routine cases that keep private enquiry agents a step ahead of starvation. He dislikes divorce cases but he does them anyway when he has to. Having served a prison sentence (he was set up as the fall guy) the world is not exactly his oyster. It’s the only job he knows how to do and it’s the only job he can get, and he likes working for himself.

Alfred Burke was in his late forties when the series began. He was the kind of character actor who will never starve, being one of those actors producers like because they can be relied upon to give solid performances, but he was never ever going to be a star. And then along came Public Eye and he found himself the star of a long-running hit series. It was a case of a perfect match between an actor and a series. Ubli Eye is almost aggressively unglamorous. It needed a star who looked very ordinary, a bit homely and decidedly battered. But what it really needed was a star with a unique kind of charismatic anti-charisma. Alfred Burke was the man for the job. 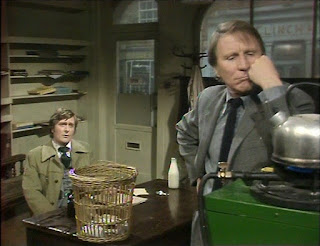 There are two other regular character in the later seasons. The first is Frank’s friend Inspector Percy Firbank (played delightfully by Ray Smith), a cynical but honest and pretty decent copper. The odd friendship between the two men is one of the joys of these later episodes. The second recurring character is ex-cop and private enquiry agent Ron Gash, for whom Marker works for a while. Gash is in some ways a lot more upmarket than Frank and in other ways a lot sleazier, or at least a lot more flexible when it comes to ethics.

Public Eye had already experimented with ongoing story arcs in the Brighton-based fourth season. That experiment is repeated in this final season. It’s almost unique for a private eye series of this vintage for events in one episode to have consequences in later episodes but Public Eye was no conventional private eye series.

This is subtle drama and very character-driven. Some of the plots are extremely clever but it’s the effect that events have on people that is always the main focus. There’s very little action. Frank Marker is not a man of action. From time to time he gets beaten up but that’s just an occupational hazard. He doesn’t believe in fighting back, for the very good reason that he would just get a worse beating. He does however, on occasions, find ways to get his revenge. It can be handy to have friends in the police.

Frank is no crusader for justice. Not that he has anything against justice, but ensuring that justice is done is not part of his job description. He’s been in the game long enough to be content to do what he’s paid to do.

In Nobody Wants to Know Frank is hired to find a missing witness. Joe Martins is a small-time villain facing a fifteen-year stretch unless his upmarket girlfriend Janet Harper can be found to provide him wth an alibi. Janet has disappeared. It sounds like a routine case so Frank is a bit surprised when some goon tries to warn him off. He’s also curious about the horse doping which has nothing to do with Janet or Joe Martins, or does it? He’s also curious as to why nobody wants to talk or co-operate. Even Frank’s friend Inspector Percy Firbank doesn’t want to know either, and then suddenly he gets interested.

That last case left Frank battered and bruised and suffering from a very uncharacteristic case of self-pity in the next story, How About a Cup of Tea? Percy Firbank tries to help him. Mrs Mortimer, the lady with whom he had a not-quite-but-almost romance in season four (the Brighton season), tries to help him. Maybe she’s still sort of in love with him but she doesn’t know. Frank kicks them both in the teeth. Percy finds a case for him but that makes things worse. He has to persuade a tenant to vacate a house and the woman’s self-pity, ironically, irritates him. A good episode focused mainly on Marker himself rather than the case. 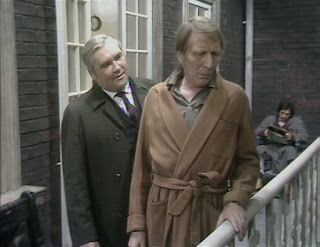 How About It, Frank? brings Marker some aggravation with an ambitious Detective Chief Inspector and it brings him a possible opportunity. And of course a case. It’s a background check for a computer company on prospective new recruit Brian Hart. Hart is a pretty good guy with a marriage that seems destined for trouble.

That case from the first episode keeps coming back to haunt Frank. His first instinct was to just forget all about it and maybe he should have gone with that first instinct. The opportunity is a partnership with Ron Gash, an ex-copper who is now doing pretty good business as a private investigator. It’s tempting but Frank is not exactly a team player. A very good episode.

They All Sound Simple at First brings Frank a case that he almost enjoys. He’s now working for Ron Gash and the case is very simple - a Polish cabinet-maker is owed seven hundred quid by his brother-in-law for an antique clock. In fact it’s a complicated family drama and nobody actually cares about the clock. It’s the kind of Public Eye story that could be very downbeat but it’s given a slightly light-hearted and rather amusing treatment. Rather enjoyable.

The Fall Guy presents Frank with a routine divorce case but there are odd things about this case right from the beginning. And things get odder. Nothing is what it seems to be. Is Frank being used? Maybe, but maybe he isn’t the only one. A very good episode.

What's to Become of Us? brings Frank a client who appears to be a wealthy man who wants his wife found. She walked out on him and he just wants to know that she’s OK. The trouble is that everything the client tells him is a lie and when he’s confronted he tells even more lies. Frank could be annoyed but actually he’s amused although also a bit saddened. It’s the combination of slightly whimsical humour with an undercurrent of despair that this series does so well. Frank is also starting to wonder if it was a good idea working for Ron Gash. Frank actually likes Ron but their methods just seem to be incompatible. Another good episode. 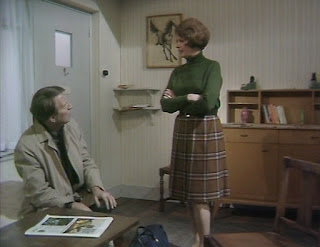 In Hard Times Frank has just opened his new office and his first clients are a couple of hoodlums. They want him to find a friend of theirs, although perhaps friend is the wrong word. It’s a case that doesn’t appeal to Frank but he needs the money. He also gets to know the local police and they don’t appeal to him either. It’s all a bit sleazy but that’s the job. A very good episode.

No Orchids for Marker is the name of the episode and by the end of it it’s safe to say that Frank Marker is very very sick of orchids. His job is to babysit some rare and valuable orchids, for an eccentric old lady. He finds it hard to imagine that anyone would seriously wish to steal orchids, or do harm to orchids. He thinks that perhaps there’s something more going on here? Which of course there is. A nice mix of cleverness and whimsicality in this one with a neat twist. A very good episode.

In The Fatted Calf Frank is employed by a wealthy businessman whose spoilt son, currently studying sociology at university, has decided to drop out to join the workers’ struggle against capitalism. He’s become involved with a professional agitator but he may be more involved than he realises. An OK episode.

There’s some real suspense in Lifer. Frank is hired by a middle-aged man, a Mr Biddle. Mr Biddle wants Frank to find his wife who has run off with another man. In fact it’s not his wife Mr Biddle wants to find, it’s the other man, and it has nothing to do with his wife. There’s a score to be settled, a very old score. But some things can never be set right. Some lives can never be put together again. It’s a story that manages to be emotionally powerful without being manipulative or sentimentalised. A very very good episode.

Take No for an Answer brings a young woman to Frank’s office. She’s worried about her Dad. He’s the chief clerk in an engineering firm. She thinks he’s in trouble. And of course she’s right. It’s all to do with those boxes of carbon paper in his sheds. Lots and lots and lots of carbon paper, and how they got there is a sad and embarrassing story. Frank also comes up against a very smooth con-man who likes to fight dirty, but Frank can play dirty too. A reasonably good typically low-key episode. 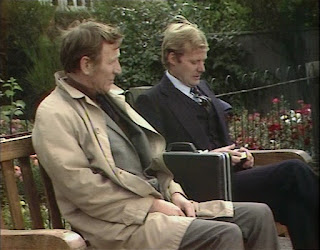 Fit of Conscience opens with the collapse of a tower block, killing four people. A man employed by the council convinces himself that he is partly responsible and he hires Frank. But what is it he wants Frank to find out, and (more importantly) exactly why does he want to find out such things? Frank is certainly puzzled. This is another fascinating human drama, with people not even sure of their own motivations.

Unlucky for Some presents Marker with a case that is as routine as could imagined. Mrs Waterfield runs a respectable family hotel. She suspects that her daughter-in-law Paula is fooling around behind her son’s back, but she never did like Paula so she realises she may be biased. She wants Marker to find out exactly what, if anything, Paula is up to. What she actually is up to comes as a surprise and that could be good luck or bad luck depending on one’s point of view. A very good episode to close the season.

It’s a pity the eighth season didn’t happen but in British television there was a prevalent attitude that it’s better to quit while you’re ahead. In 1975 Public Eye was still extremely popular with both viewers and critics and the seventh season allowed it to go out on a high note, with no signs at all of a falling off in quality. This is truly one of the all-time great private eye series. Very highly recommended.