some Alfred Hitchcock Presents from season one 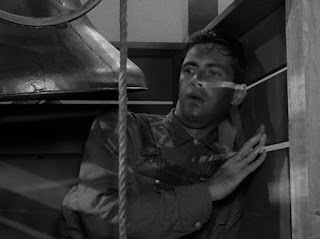 I finally got around to watching the last few episodes of the first season of Alfred Hitchcock Presents (originally screened in 1955-56), possibly my all-time favourite anthology series.

Yes, like any anthology series it’s uneven but even the stores that don’t quite make it are usually interesting failures. And the episodes that do work (and that’s the majority of them) are some of the best television ever made.

While Hitchcock seems to have exercised some vague oversight of the program the producing duties were left to Joan Harrison. She had worked with Hitch for many years. She knew his methods, she knew how his mind worked and she knew the kinds of stories he liked. She could be relied upon to make sure that the series would have a thoroughly Hitchcockian flavour. Which it does.

The series is an object lesson in how to pack just enough plot into a half-hour format.

The Belfry is a bit of a misfire although it’s certainly different and it’s always nice to see a TV episode that takes a few risks. It all takes place in a one-horse country town. Clint Ringle (Jack Mullaney) can’t wait to show Ellie Marsh (played by Hitchcock’s daughter Pat) the house he is building for them, for when they get married. The problem is that Clint is a bit unstable and he’s not too bright and he’s living in a dream world. Ellie does not have the slightest interest in marrying him. In fact she’s just become engaged to Walt Norton. Poor Clint really flips out when he hears this piece of news and unfortunately he happens to be holding an axe at the time. So that’s the end of Miss Ellie’s fiancé and her marriage plans. 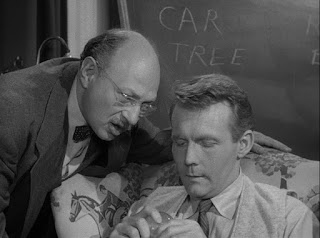 That’s the beginning of the story. The rest of the episode is the manhunt for Clint Ringle. Clint isn’t smart but he does come up with a rather unusual idea for a hiding place. He hides in the bell tower of the town’s one-room schoolhouse. It’s a very clever ideas in some ways, but in other ways maybe it's not quite so clever. The big question is, how long can he hold out in such a tiny cramped hiding place and will anyone ever thinking of looking in such an unlikely place?

Mostly the episode is taken up by Clint’s inner thoughts (conveyed to us in a voiceover narration). Clint really doesn’t understand what he’s done or what the consequences will be and the more he thinks about things the more he figures that it wasn’t just Walt Norton who was to blame, it was Ellie as well. He broods about this a lot, and decides he should do something about it.

The suspense comes from our uncertainty as to exactly what Clint is likely to do. Is he going to go after Miss Ellie? And of course there’s the suspense provided by the fact that Clint is still being hunted.

The Hidden Thing is a somewhat controversial episode. Almost everybody seems to hate the ending. Of course I’m not going to give any hints as to what that ending is.

It all starts with Dana Edwards' and his fiancée Laura stopping to get a hamburger. Laura leaves her bag in the car and goes back to get it. Crossing the street to the car she is run down and killed by a hit-and-run driver. Dana witnessed the accident. He was the only witness. Without his evidence the police have no chance of catching the killer. But the one thing he cannot remember is the one thing that matters - the licence number of the car that hit Laura. 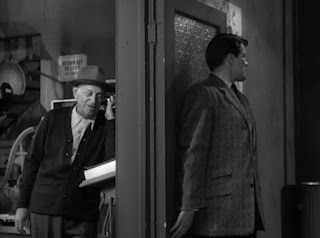 Then John Hurley shows up on his doorstep. He lost his son to a hit-and-run driver. He tells Dana that he has a technique for total recall that will allow Dana to remember that licence plate number. Of course there’s a price to be paid - remembering that vital detail will require Dana to relive the accident and see Laura die again.

So it’s a story about the past and about how it’s sometimes a very good thing that we don’t remember things. You find yourself wondering, if Dana does remember that licence plate, will it actually help him? Should we forget the past? Or should we pay any price to avenge a wrong?

Then there’s the ending which so many people hate because it’s not the ending they wanted. I think that to some extent that’s the key to the success of Alfred Hitchcock Presents - it was a series that was prepared to take the risk of giving us endings that are not the endings we expected or hoped for. So for me this episode works and works quite neatly.

The Legacy takes place among the international set (in 1956 they weren’t yet known as the jet set). Oil tycoon Howard Cole and his even richer wife Irene have a happy marriage. Howard has his hobby to keep him amused. His hobby is collecting blondes (his latest blonde is a Hollywood starlet), and it’s a hobby that Irene regards with amused toleration. But now Irene is getting unexpected attention from the opposite sex, in the person of the fabulously wealthy and glamorous Indian prince Burhan. Since Irene is neither glamorous not beautiful (nor particularly young) this relationship is regarded with amazement by all.

By the halfway stage you’re probably going to be a bit disappointed because the explanation is so obvious and so straightforward. But this is Alfred Hitchcock Presents and the twist at the end is not the kind of twist that you’re probably expecting.

This is a series that made its reputation by not giving the audience what it expected and this episode is no exception. 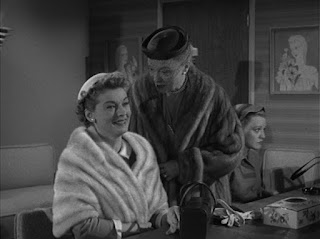 Mink is a very slight story and it’s totally lacking in any kind of gruesomeness. Mrs Hudson takes her new mink stole to a furrier to have it valued. The furrier recognises it as one that was stolen two weeks earlier. The police are called. Mrs Hudson has a plausible explanation but the two witnesses who could confirm her story don’t back her up. Now she could be facing prison.

The explanation is just too simple and obvious. There is a kind of twist at the end but it’s subtle and may not satisfy some viewers. I like the fact that the series was prepared to get right away from murder in episodes like this but in this case it doesn’t quite work. The setup is good, with Mrs Hudson becoming more and more flustered and confused and terrified of going to prison and with a bit of feel of paranoia to it - the paranoia of finding that nobody will believe her. It’s just a bit too slight and the payoff just isn’t quite there.

In Decoy accompanist Gil Larkin has fallen for singer Mona Cameron. When he finds out that her husband (big time theatrical agent Ben Cameron) has been beating her up he is outraged and goes to Cameron’s office to confront him. And Gil steps into a nightmare world in which he’s the chief suspect in a murder. There are two possible witnesses, of a sort.

The plot is solid but not overly hard to predict. It’s the stylish execution of the idea that’s interesting. There’s the film noir style voiceover narration. The two people whose evidence could clear him are a Japanese dancer and a crazy DJ. The police also play a more interesting rôle than usual. Overall a good episode.

The Creeper deals with Ellen Grant, a housewife whose husband works the night shift and now she’s really scared because a serial killer known as The Creeper has been targeting women home alone at night in her neighbourhood. She’s scared and her fears just keep growing. Anyone could be the killer. Anyone at all. 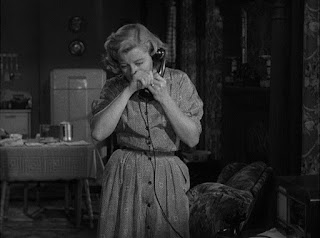 This episode has both great atmosphere and nerve-wracking suspense. The viewer will have some pretty strong suspicions about what’s going to happen but that just makes the suspense more intense. That’s what makes for effective suspense - the viewer knows (or thinks he knows) where the danger lies but the protagonist doesn’t. And there’s just enough misdirection to keep us from being quite sure. We share Ellen’s fears.

A fine performance by Constance Ford as Ellen certainly helps. This is the kind of darkly ironic episode that earned this series its high reputation. Great stuff.

In Momentum Richard Paine is down on his luck. He and his wife have both been sick, he can’t find a job and they’re broke. There is a way out however. His old boss, a man named Burroughs, owes him a lot of money. All Paine has to do is to keep his head when he confronts Burroughs. But Richard Paine is one of nature’s born losers. He makes a really dumb mistake and then he just keeps on making mistakes. His mistakes develop a momentum of their own.

This one is based on a Cornell Woolrich story which explains why it has a particularly nasty ironic ending. An excellent film noirish episode.

I reviewed some of the earlier episodes in season one of Alfred Hitchcock Presents a few years back and I reviewed the episode And So Died Riabouchinska.