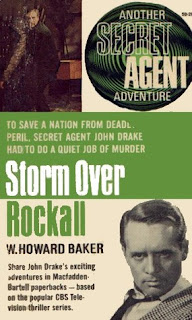 One of my more recent enthusiasms has been chasing down the various tie-in novels that were produced to accompany TV series. My latest find has been the third of the six Danger Man tie-in novels, W. Howard Baker’s Storm Over Rockall (published in 1966). Which is pretty exciting given that Danger Man (or Secret Agent as it was known in the US) is in my view one of the best TV spy series of all time.

These TV tie-in novels started to become a big thing in the 60s. One of the things that is interesting about them is that they often have a subtly different flavour compared to the TV series on which they’re based. In a novel of course you could get away with a bit more sex and violence but there are often other differences. The producers of a TV series were subject to a lot of pressure from the networks in the US. Even a British series could be affected by American pressure if you wanted to have a chance of selling it there. Return of the Saint was a good example of a British series that had to be made much less violent than originally intended as a result of such considerations.

The writers of TV tie-in novels had by contrast a greater degree of freedom. The result was that the novels were sometime closer to the tone that the producers originally intended the series to have. A notable example is Michael Avallone’s The Birds of a Feather Affair, the first tie-in novel based on The Girl From U.N.C.L.E., a series that suffered from pressure from the network to make it zanier and more light-hearted. Compared to the series Avallone’s rather good novel is much darker and more hard-edged.

The trick of course was to make use of this greater freedom while still capturing the essential feel of the TV series.

Storm Over Rockall is an original novel but some similar ideas were used in the TV episode Not So Jolly Roger (which happens to be an excellent episode).

Someone is trying to sabotage a British rocket program known as Phase Y. It could the Russians. Interestingly the British intelligence services seriously consider the possibility that it could be the Americans. That’s an interesting difference from the TV version. ITC were keen to sell the series in the US so such a suggestion would have been unthinkable in the TV series.

All that is known is that a pirate radio station is broadcasting coded messages in the form of music. The messages are believed to relate to the acts of sabotage and also to anti-nuclear protests. Those protests may well be organised by the same people carrying out the sabotage. Pirate radio stations, usually broadcasting from ships anchored just outside British territorial waters, were a big thing in Britain in the 60s and were a way of circumventing the BBC’s monopoly. They provide ideal background for spy fiction.

John Drake is sent to find out what exactly is going on and to neutralise the problem, by any means necessary. Including assassination. This is another interesting contrast to the TV series in which Drake is a man who only resorts to violence when there is no alternative. Drake’s reluctance to use violence was something that the star of the series, Patrick McGoohan (a man of very strong moral views) insisted upon. The novel in this case may be closer to the original conception of the character as a “licensed-to-kill” James Bond type of figure.

It’s also intriguing that in this novel Drake is used on missions that officially don’t happen. If something goes wrong the British government has plausible deniability. They will disavow any knowledge of his activities. In the original 1960 TV series Drake’s position was also slightly ambiguous (in fact even his nationality was slightly ambiguous).

Drake has one important lead which takes him to a discotheque called The Deeper Dive. He slowly puts the pieces of the puzzle together. In the process he gets a number of beatings for his trouble and has the requisite number of narrow escapes from certain death. As expected the trail eventually leads him to the pirate radio station and we get some mayhem on the high seas.

The ending is very Bondian indeed. Patrick McGoohan would not have approved.

This is very much second-tier spy fiction. W. Howard Baker is no Len Deighton. It is however a reasonably competent espionage tale. Obviously it’s going to appeal mostly to fans of the TV series who should enjoy its glimpses of a slightly more ruthless John Drake. So if you are a Danger Man fan it’s recommended.
Posted by dfordoom at 03:37