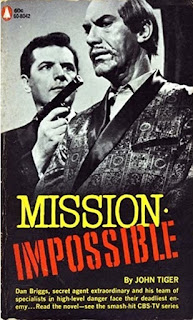 This first tie-in novel is interesting because it’s based on the first season of the TV series, which means the Impossible Missions Force is led by Dan Briggs (played on TV by Steven Hill) rather than the better-known Mr Phelps of the subsequent seasons. Which is OK by me because the first season happens to be my favourite - I liked the fact that Dan Briggs seemed nothing at all like the popular idea of a secret agent. He could be an accountant, or a pharmacist. I’ve always imagined real spies as being like that - very very ordinary-seeming people.

Mr Briggs gets his instructions in the usual way. He has to go to a particular office at a particular time where a tape-recorded message awaits him. The latest assignment for the IMF is to catch two wanted Nazi war criminals and foil a plan to manufacture a madness-inducing gas. The mission will take the IMF to the small (and of course mythical) South American republic of Santilla. The two Nazis (who are evil mad scientist types) have constructed a secret laboratory on an island in a lake. The laboratory is just about impregnable.

You won’t be surprised to learn that for this mission Mr Briggs selects his four most reliable agents - master of disguise Rollin Hand, weightlifter Willy Armitage, technical expert Barney Collier and of course the ever-glamorous model Cinnamon Carter.

Dan Briggs believes that this will be such a tough mission that it is advisable to have not one but two elaborate plans.

The five members of the IMF arrive in Santilla with their covers in place. Dan Briggs is posing as a Texas oil man. Cinnamon Carter is a beautiful American woman on the prowl for rich men. Rollin Hand poses as an Arab Prince, with Barney as his aide-de-camp and Willy as his bodyguard.

Plan A goes badly wrong so Briggs switches to Plan B. Plan B is based (like any good IMF plan) on deception and it is also based on the use of fear as a weapon. Fear leads people to make mistakes and the IMF needs the two Nazis to make a few mistakes.

Nazi plots were a staple of both American and British action-adventure series in the 1960s. In the world of 1960s television Nazis were all-powerful, they were everywhere and they were constantly about to establish the Fourth Reich.

The book is a bit more cynical about the US Government than the TV series. It is admitted in the book that the US Government is happy to support military juntas (even brutal ones such as Santilla) because it’s good for American business. It’s only one throwaway line but it’s a hint of cynicism that would never have been permitted in the TV series.

In one respect the author misses the point of the TV series. Mission: Impossible was the most relentlessly plot-driven series in television history. There is less characterisation in this series than in any other series ever made. This was a deliberate choice. Nothing was to distract the viewer from the plot. It was vital for the audience to know nothing about the regular characters. This presents an author with difficulties. Writers, even writers of pulp thrillers, want to tell us at least something abut the characters to bring them to life. So the author provides the five IMF members with backstories and emotions. This is a very big mistake. It’s not a fatal error but it is a definite error.

He even throws in a hint of romance between Briggs and Cinnamon, an ever bigger mistake. The entire point of the series was that the IMF members are professionals whose survival depends on having no emotional involvement whatsoever. Their personal lives are rigidly separated from their professional lives. If Dan Briggs had had any inkling that Cinnamon was interested in him romantically he’d have fired her. He’d have had no choice. Spies cannot afford such luxuries. Emotions lead to errors of judgment and errors of judgment get people killed and (even worse) can prejudice the success of the mission.

The other major difference from the TV series is that there’s a lot more violence in the book. The avoidance of unnecessary violence was another key element in the TV series. If someone has to be killed it’s better to manipulate his own people into killing him. It’s crucial that the IMF should not leave a trail of death and destruction behind them - that sort of thing attracts attention and spies do not want to attract attention.

There’s also slightly more emphasis on sex. In the TV series it’s hard to imagine a scene in which Cinnamon is bound and gagged stark naked but we get such a scene in the book. I can understand the author’s decision to add a bit more sex and violence - readers expected spy thrillers (unlike TV series in the 60s) to have those ingredients.

One of the things that made Mission: Impossible such a good series was its realism. Real-life spies don’t run around with guns - spies who run around with guns will only get themselves into trouble. Spies rely on deception and manipulation. That’s why Cinnamon Carter is the most realistic female spy in TV history. If she gets into trouble she doesn’t reach for her gun (she doesn’t carry one because they terrify her) and she doesn’t rely on her martial arts skills (she has none). She talks her way out of trouble. If that doesn’t work she turns on the sex appeal, or appeals to the bad guys’ sense of chivalry. She does what it takes to survive and she knows that trying to shoot or fight her way out of a situation will just put her in more danger.

So there are a few unfortunate minor departures from the spirit of the TV series. On the plus side it has to be said that Wager understood that the key to the TV series was elaborate plots based on deception and he provides us with just that. The fear campaign against the ex-Nazi colonel is clever and it’s absolutely consistent with the methods the IMF uses in the TV series.

Wager also understands the importance of giving each IMF team member a role based on that character’s special abilities - Barney gets to fiddle with high-tech gadgetry, Briggs uses his planning skills, Rollin uses disguise, Willy makes good use of his unusual strength and Cinnamon uses her considerable skill in the art of seduction. Apart from the excessively high body count this does feel like a real IMF adventure. And on the whole the characters behave the way they should. Rollin lives on his nerves but that’s what brings out the best in him. Barney remains cool if any of his gadgets malfunction - he has absolute confidence that he will eventually get them to work. Dan Briggs is methodical and utterly ruthless. Cinnamon is equally ruthless in her use of her sex appeal.

On the whole it all works and it captures the atmosphere of the TV series more successfully than most such novels. It’s fast-paced and the plot feels like a Mission: Impossible plot. It’s all very enjoyable and highly recommended.

The review of this book at Glorious Trash is also worth checking out.