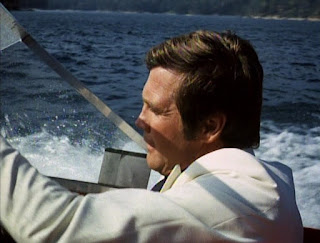 The Solid Gold Kidnapping, which went to air in late 1973, is the third of The Six Million Dollar Man TV movies. Like the previous movie it was directed by Russ Mayberry. This one was written by Alan Caillou and Larry Alexander.

As in Wine, Women and War this is very much Steve Austin in James Bond mode. The pre-opening credits action prologue is rather Bondian. Even the theme song (sung by Dusty Springfield) is a bit Bondian. And as in Wine, Women and War there’s a lot of rather risqué sexual innuendo which Lee Majors tries to deliver in as Bondian a manner as possible. There are exotic settings (thanks to the copious use of stock footage) and there are three Bond girls (sorry, Austin Girls). And one of them is a beautiful but deadly Contessa. There’s even a casino scene. I keep expecting the hero to say, “The name is Austin. Steve Austin.” And then to order a vodka martini, shaken not stirred.

This time Steve is up against an international criminal organisation, very much like SPECTRE. Very very much like SPECTRE. They specialise in kidnapping high-ranking diplomats and governments officials for immense ransoms. Their target this time is not just a very senior American diplomat (named William Henry Cameron), he is also a man who knows all of America’s military secrets. He should be worth every penny of the billion dollar ransom they’re asking. Yes, a cool billion. In gold.

That action prologue is actually a very good action set-piece in a ruined Mayan temple.

The really cool idea in this movie (and it’s a very science fictional idea) is the method the OSI uses to find the kidnappers. Genius scientist (who also happens to be young, attractive and female) Dr Erica Berger (Elizabeth Ashley) has developed a technique for transplanting brain cells in rats to give one rat the memories of another rat. She hasn’t tested it on humans yet but now she’s going to have to do just that - with herself as the guinea pig. She transplants brain cells from one of the kidnappers who was killed into her own brain. Now that she has that man’s memories she should be able to direct Steve to wherever the kidnappers have stashed Cameron. Which means she’ll have to go with him, offering an excuse for Austin to have a beautiful woman with him on his mission. And for some hints of an emotional attachment. Steve sees Erica as being a bit like him - a human experiment. And the experiment might threaten her humanity. 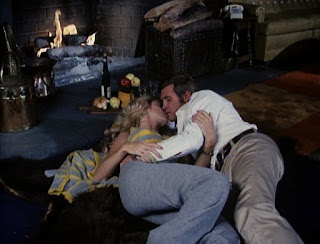 The US Government agrees to the ransom and the gold is sent by freighter to Rome, with (weirdly) just one guy to guard it.

I thought Lee Majors was fine in the first two movies but I like him more in this one - he seems just a bit more relaxed and more confident. And a bit more convincingly Bond-like.

Elizabeth Ashley gives an effective enough performance, especially when she has to portray the trauma of having someone else’s sometimes unpleasant memories. Luciana Paluzzi is fine as the Contessa, a typical Bond movie female. Richard Anderson is suitably ruthless as Steve’s boss Oscar Goldman, a man who has no qualms about sacrificing people to get the job done.

John Vernon was always good at being cold-blooded and ruthless and he makes a good chief villain. Not quite Bond villain stature but still pretty menacing.

There’s quite a complex plot here and it has some very neat twists. The twist with the gold is very clever. The subplot with Erica possibly losing her mind is handled well without unnecessary histrionics. Steve Austin gets quite a few opportunities to demonstrate his super powers. The opening action set-piece is the best but the speedboat chase is good and there’s some decent suspense.

Wine, Women and War is perhaps just a little better but The Solid Gold Kidnapping plays very well as a cut-price Bond movie with some nifty science fiction elements. This is pretty entertaining stuff and it’s highly recommended.
Posted by dfordoom at 09:51