The Hound of the Baskervilles (The Adventures of Sherlock Holmes and Dr. Watson) 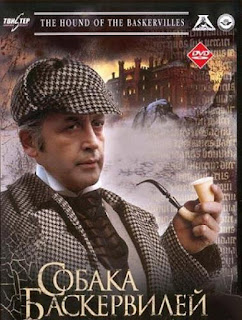 The Hound of the Baskervilles was made for Soviet television in 1981, as part of their excellent The Adventures of Sherlock Holmes and Dr. Watson series. It was directed by Igor Maslennikov, who co-wrote the script with Yuri Veksler.

It is of course one of the many many adaptations of Sir Arthur Conan Doyle’s famous 1902 novel. It’s a two-part adaptation with a total running time of 154 minutes.

The setting is the moors in Devonshire. Sir Charles Baskerville seems to have become the latest victim of the terrifying beast that roams the moors, the hound of the Baskervilles. It’s a family curse dating back to the mid-18th century.

The adventure begins for Holmes and Watson when a worried young physician, Dr Mortimer (Evgeniy Steblov), turns up at 221B Baker Street with an old manuscript. Dr Mortimer holds grave fears for the safety of the heir to the Baskerville estate, Sir Henry Baskerville, newly arrived from Canada. Holmes of course does not believe in supernatural hounds but he has caught the scent of a fascinating mystery.

Dr Watson is despatched to the Baskerville estate while Holmes attends to certain investigations of his own in London. Watson discovers that Sir Henry Baskerville is a wild-eyed eccentric but Baskerville has a certain charm as well. Watson is used to dealing with eccentrics (Sherlock Holmes is nothing if not eccentric) and he has a vast store of tolerance for odd behaviour.

The death of Sir Charles Baskerville certainly appeared to be another manifestation of the ancient family curse.

Of course like Holmes the viewer will be inclined to look for a more rational explanation. There are lots of romantic complications that could provide clues. There’s the passionate love between Sir Henry Baskerville and Miss Beryl Stapleton, the sister of Baskerville’s neighbour Mr Stapleton. There’s a Mrs Laura Lyons, the slightly disreputable daughter of an eccentric and remarkably litigious old man named Frankland. Mrs Lyons may have been involved in an intrigue with Sir Charles Baskerville. 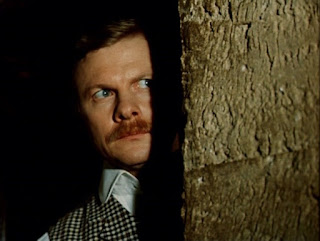 Old Frankland is crazy enough to be involved in anything.

There’s also an escaped murderer roaming the moors. Sir Henry’s butler Barrymore is definitely hiding something. Dr Mortimer might be hiding something as well. He’s a pleasant young man but he seems rather anxious.

As for the hound, we don’t see it until the very end but we hear it. The final reveal of the beast is extremely effective and genuinely horrifying.

As in the previous episodes I’m struck by the amount of care that went into this production and in particular by the determination to avoid a studio-bound look. The London street scenes were shot in the old quarter of Riga. I have no idea where the scenes of the moors were shot but those scenes perfectly capture the required feeling of loneliness and desolation. And the sense of brooding menace. In some ways the locations used actually work better than authentic English locations would have worked - they’re so wonderfully cold and bleak. It’s almost like we’re on an alien world.

The sets and the costumes are sumptuous. No opportunities are missed to make the look of the production interesting. It’s one of the most visually impressive Hounds of the Baskervilles that I’ve seen. This is a superbly crafted production with some stunning cinematography - not just by 1980s TV standards but by feature film standards.

This adaptation has more of the feel of a feature film than of a TV series. The production values are high. 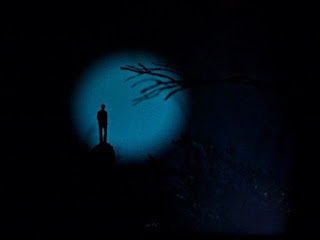 I don’t think there’s much I can add to what I’ve already said in a previous review about the wonderful performances of Vasily Livanov as Holmes Vitaly Solomin as Dr Watson. Solomin is the best Watson ever. Due to the nature of the plot Vitaly Solomin has to carry a large part of the first part single-handed and he has no difficulties at all in doing this. This is a Watson we enjoy watching, rather than being impatient for Holmes to make his re-appearance.
Nikita Mikhalkov’s performance as Sir Henry Baskerville is amusing. Sir Henry has lived for most of his life in the United States so I assume Mikhalkov was trying to make him seem like a brash American. Actually he comes across as a crazy Russian! But he certainly makes the character seem wildly eccentric and yet rather good-natured.

As is usual for this series the supporting performances are very strong with Aleksandr Adabashyan as Baskerville’s butler Barrymore (a man who seems to know a great deal more than he is willing to reveal) and Irina Jupchenko as Beryl Stapleton being especially good. Beryl may also know more than she is prepared to disclose.

What’s most impressive here is the gloomy, spooky, doom-laden very gothic atmosphere. The moors are pretty frightening even without a supernatural beast lurking in them.

One interesting feature of this adaptation is that whenever a letter or a document of any kind plays a part in the story it is always in English - presumably an attempt to give the production a more English flavour. 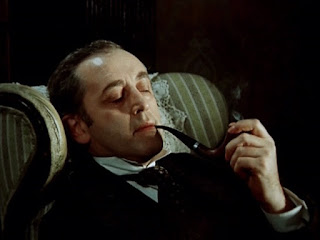 This is an adaptation that is not only more faithful to the plot of Conan Doyle’s story it is also more faithful than most to the feel. Readers in 1902 who were familiar with the Sherlock Holmes stories would have been aware that this was not going to be a novel of the supernatural. It is a detective story. Sherlock Holmes is a man who takes the mysterious and gives it a rational explanation. Consequently this production downplays the supernatural elements. Neither Holmes nor Watson believes for one second that this is really a case of a spectral beast from the underworld. This is murder, with very real human motives.

If you’re going to watch this production (and you should) it’s better to start with the earlier episodes (which I’ve reviewed here) which will give you a chance to really get a feel for the performances of Livanov and Solomin.

There are those who regard this as the best ever adaptation of Conan Doyle’s novel. They may well be right. It’s certainly one of the very best and it might even qualify as my personal favourite. It’s not a slam-bang fast-paced version. The story unfolds in a leisurely manner allowing plenty of time to immerse the viewer in the atmosphere. Very highly recommended.

The Russian DVD offers a very good transfer with optional English subtitles.
Posted by dfordoom at 20:49