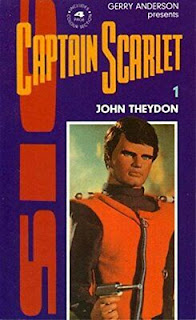 Captain Scarlet and the Mysterons was the first of three TV tie-novels accompanying Gerry and Sylvia Anderson’s TV series of the same name. Written by John William Jennison (1911-1980) under the name John Theydon the novel appeared in 1967.

If you’re thinking of reading this book I’m assuming you’re a fan of the TV series (which I reviewed here a few years ago).

Earth attacked and destroyed a Martian city after a series of misunderstandings (and driven to a large extent by panic). The Mysterons, the masters of the city, recreated it and are now undertaking a program of vengeance against the Earth. Earth’s only effective defence is an international security organisation known as Spectrum. The Mysterons have the power to destroy things (and people) and then recreate them. People recreated in this way are effectively slaves of the Mysterons. Spectrum does however have one ace up its sleeve. One of their operatives, Captain Scarlet, was Mysteronised but is no longer a slave of the Mysterons, and he is indestructible.

The novel concerns an attempt by the Mysterons to disrupt the world’s weather (a popular science fictional idea in the 60s that was also utilised in Voyage to the Bottom of the Sea).

The Mysterons make use of a bitter scientific rivalry between Professor Deitz (who believes the world’s weather can be controlled by satellites) and Professor Stahndahl (who believes he can control the planet’s weather by bouncing a beam off a newly discovered electro-magnetic layer surrounding the Earth).

The first target of the Mysterons is London which gets hit with a tropical storm of extraordinary severity. Captain Scarlet and Rhapsody Angel (one of Spectrum’s five beautiful girl fighter pilots known as the Angels) are on leave in London at the time and are lucky to survive.

The next target is Florida. The most savage hurricane in history is just three hours from the coast. The only thing that Colonel White commander of Spectrum) can think of to do is to order three of the Angels to nuke the hurricane!

Colonel White suspects that one of Professor Deitz’s for weather-control satellites has been destroyed and recreated by the Mysterons and is responsible for the weather chaos. That satellite has to be intercepted and destroyed but destroying something that has been Mysteronised is no easy task. There is a way the satellite could be destroyed but it will be risky.

Unfortunately for Spectrum the Mysterons’ plan is actually much more devious than just hijacking a satellite. Somehow Captain Scarlet will have to find the secret laboratory from which all the damage is being done. Captain Scarlet’s indestructibility will be put to the test during this adventure.

Theydon was obviously aiming to include as much as possible of the high-tech Spectrum equipment featured in the series. The Angel Interceptors, the Spectrum Pursuit Vehicles (kind of like high-speed wheeled super-tanks) and the Spectrum Passenger Jets all feature in this tale. He also clearly wanted to find ways to work into the story as many as possible of the show’s main characters - Captain Scarlet and his buddy Captain Blue, Colonel White, all five Angels and of course the sinister Mysteron agent (and former Spectrum officer) Captain Black. Captain Scarlet’s indestructibility naturally has to play an important part. Theydon wants to throw everything into the mix and he does so pretty successfully.

There’s non-stop action, plenty of narrow escapes and lots of things get blown up. And some of them get blown up by nuclear weapons! Rhapsody Angel is captured by the Mysterons and has to be saved.

The plotting is frenetic and reasonably effective.

This is a book aimed at younger readers so there’s no sex and the violence is not too graphic. There is (as in the TV series) some mild flirtation between Captain Scarlet and one of the Angels but it’s all very wholesome. The tone is very close to that of the series.

Overall it’s a surprisingly entertaining little adventure. It’s definitely worth a look if you’re a fan of the TV series. Recommended.
Posted by dfordoom at 09:03