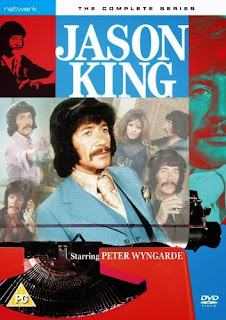 Jason King was in many ways a TV series that nobody wanted. Lew Grade, the head of ITC who owned the show, hated it from the word go. Monty Berman and Dennis Spooner, who were responsible for making it, thought it was a dubious idea. And star Peter Wyngarde had serious misgivings about it. In fact it’s a series that probably never have been made. With Department S having been extremely successful the obvious thing for ITC to have done would have been to commission another season of a proven success. That was not how Lew Grade saw it.

Grade always seems to have had a tendency not to follow up on obvious success. His bizarre decision in 1967 to commission Gerry Anderson to do a brand new series (Captain Scarlet) rather than another season of the immensely successful Thunderbirds was an early example of this trend and a decade later he cancelled The Return of the Saint after a single season even though it was a hit. Grade had never particularly liked Department S and he actively disliked Peter Wyngarde. Wyngarde claims that Grade told him that her was only giving the go-ahead for Jason King because his wife loved the character so much.

Grade also at times seems to have had trouble understanding why his popular series were popular. It was obvious to everyone else that one of the main reasons Department S was a winner was that the three lead characters (and the three lead performers) balanced each other so perfectly. Jason King was indeed the most popular character with the public but that was because he provided the spice in a well-balanced dish. Too much Jason King was likely to be too much of a good thing. And so it proved.

An equally ill-considered decision was to shoot the series in 16mm rather than 35mm. This made the series immensely difficult to sell in the US. It also meant that a series that relied on colour and glamour ended up looking cheap and shoddy. 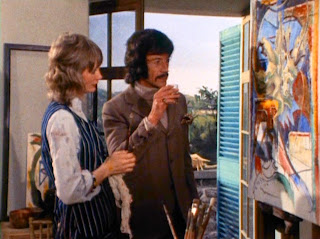 Jason King also represented a change in format compared to Department S. Whereas Department S (like its non-ITC contemporary Special Branch) had been a clever blending of the secret agent and crime genres Jason King put much less emphasis on the secret agent side of things. Jason no longer works for Department S. He is now more or less a freelance amateur crime-fighter, although he does on occasions get inveigled into doing jobs for intelligence agencies.

Jason King in fact belongs to the 1920s and 1930s British thriller tradition of wealthy amateurs for whom solving crimes is an amusing hobby and whose crime-fighting overlaps with the world of espionage. This is the world of Bulldog Drummond and The Saint, of Dornford Yates and Berkeley Gray, but with 1970s fashions (and social attitudes).

The 1970s social attitudes are crucial. Of all the TV heroes of that era Jason King is the most cheerfully irresponsible and hedonistic. He makes Simon Templar look like a prude. Simon Templar was a 1950s hero in a 1960s world. Jason King is a 1970s hero in a 1970s world. Jason King marks the high water mark of the Permissive Society. But not quite - Jason King is no hippie. He has no interest in changing the world. He certainly has no interest in challenging the consumer society. King is the epitome of conspicuous consumption. He is rich and he enjoys the good life. So did Simon Templar, but Simon Templar had a sense of duty. The Saint had made a lot of money (perhaps not entirely honestly) but he sees wealth and a sense of duty to society as being two sides of the same coin. Jason King undertakes crime-fighting and occasionally espionage because it amuses and entertains him. 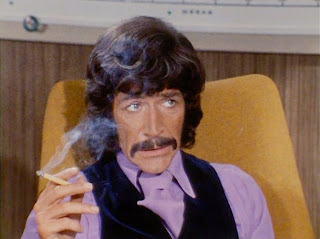 In the Jason King series the character becomes even more flamboyant and outrageous than he’d been in Department S. In fact while Department S trod a fine line between seriousness and parody Jason King descends into pure parody. That’s the weakness of the series but it’s also its principal charm. Jason King is so deliriously over-the-top that it almost works. More surprisingly, quite often it really does work. For all its faults it has to be admitted that it’s often a great deal of fun.

The series is also quite clever in the way it deliberately mixes up fiction and reality. Jason King is the author of the fabulously successful Mark Caine crime thrillers and at times he finds himself living out the plots of his own novels. We’re never quite sure if Jason is really capable of distinguishing himself from his fictional creation, just as we’re never quite sure if Peter Wyngarde is playing himself or Jason King. Other characters seem to be equally incapable of telling Jason apart from his fictional detective. At its best the series carries off this ploy with considerable wit and panache. 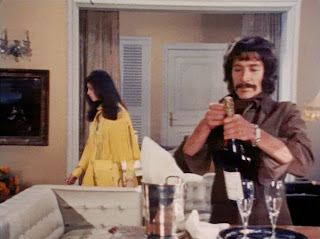 Most of those involved with the show felt that the quality of the scripts was not quite up to the standards of Department S. Generally speaking that’s true. There’s nothing here to compare to the brilliance of Department S episodes like The Man in the Elegant Room or The Pied Piper of Hambledown. There are however some quite good Jason King episodes - The Constance Missal, Toki, As Easy as A.B.C. and the two-parter All That Glisters are all  excellent. To Russia - with Panache (in which Jason finds himself working for the Kremlin) is fun.

And then of course there are the clothes. Nobody but Peter Wyngarde could get away with wearing such clothes. Jason King likes to surround himself with beautiful things, although his ideas on fashion and interior decoration are somewhat idiosyncratic and outrageously 1970s. He also likes to be surrounded by beautiful women and the series is not lacking in glamour, especially with actresses like Ingrid Pitt appearing as guest stars.

I own the old Region 4 Umbrella DVD boxed set. The transfers are decidedly iffy but that is probably due to the source materials - a series shot on 16mm is never going to look as good as one shot on 35mm. The series has also been released in Region 2 by Network.

Jason King is an indulgence, a guilty pleasure if you like, but it does have a great deal of style. It also has Peter Wyngarde at his most deliciously excessive (and no-one ever did excess quite as well as Wyngarde did). For all its flaws it’s remarkably enjoyable, and it’s certainly distinctive. Highly recommended.
Posted by dfordoom at 07:16