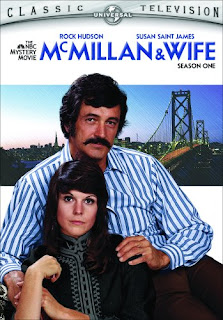 McMillan and Wife was one of three series (along with Columbo and McCloud) that originally comprised The NBC Mystery Movie, the first of NBC’s “wheel series” with three different series screening on a three-week rotation in the same timeslot. Those three original series all proved to be very successful with McMillan and Wife lasting for no less than six seasons (from 1971 to 1977).

Rock Hudson and Susan Saint James were cast as the two leads, San Francisco Police Commissioner McMillan and his wife Sally. John Schuck as Sergeant Enright and Nancy Walker as the McMillans’ maid Mildred are the other regulars.

Rock Hudson had of course been a very major movie star in the 50s and 60s. By the beginning of the 70s his career was perhaps just starting to falter a little so the offer of the lead in a television series must have been quite welcome. The fact that the series included in the NBC Mystery Movie programming comprised feature-length episodes, boasted high production values and had shooting schedules that were quite generous by television standards (since each series only went to air every third week) must have made the transition from movies to television somewhat less painful than usual. And since McMillan and Wife turned out to be a major hit it proved to be a very good career move on Hudson’s part.

The excellent chemistry between Hudson and Susan Saint James was certainly a major contributor to the success of the series.

Like most of the various series that ran under the NBC Mystery Movie and NBC Wednesday Mystery Movie banners McMillan and Wife adhered quite deliberately to an old-fashioned formula. The stories were classic mysteries in the style of the golden age of detective fiction of the 1920s and 1930s. This is emphatically not the world of serial killers, gangs and drug murders. The social disintegration of the 70s is nowhere in evidence. This is televisual comfort food for a world that was desperately in need of just that commodity, a commodity even more sorely needed today. It’s escapist entertainment, and if (like me) you happen to be extremely fond of escapist entertainment then this series provides it, and does so with style and wit. 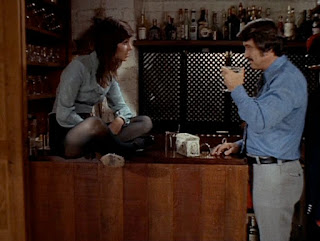 The pilot episode, Once Upon a Dead Man, establishes the tone for the series. The plots will be complex and outlandish and somehow Mrs McMillan will keep finding herself right in the middle of a murder. In this instance the plot involves an Egyptian mummy, horology, avant-garde theatre and a bidding duel over an 18th century Italian clock. Jonathan Harris (Dr Smith from Lost in Space) makes an appearance as an auctioneer. The bicycle chase through the streets of San Francisco is a nice touch.

In the first episode of the actual series, Murder by the Barrel, the McMillans are moving house and Mrs McMillan finds a body in a shipping barrel. Unfortunately the body then disappears. In keeping with what appears to be a fixation with offbeat action sequences we have an almost comic-book scene with barrels on a conveyor belt to nowhere, with one of the barrels containing something very precious indeed to Commissioner McMillan.

The Easy Sunday Murder Case probably won’t present viewers with too many difficulties in solving the mystery but it has an engaging light-hearted feel and some amusing moments.  It has plenty of affectionate banter between Hudson and Saint James. It even has a car chase, a very rare occurrence in any of the NBC Mystery Movie series. In fact it has a dog chase as well, with Mrs McMillan in hot pursuit of a Pekingese on the run! It’s lightweight entertainment but it’s fun.

At times the series edges very close to out-and-out farce (and in episodes like The Easy Sunday Murder Case it crosses that line completely). It’s all part of the charm of the show. 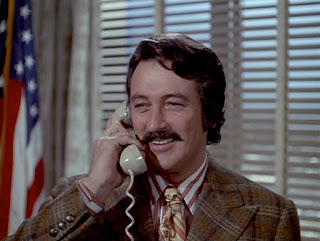 Husbands, Wives, and Killers pushes this tendency even further, with Commissioner McMillan dressed as a giant bunny for a costume ball.

Knowing nothing about American football I found Death Is a Seven Point Favorite a bit bewildering. It’s still a fairly entertaining mystery, even for people like myself who have no idea what a quarterback is.

The Face of Murder pushes plotting to the limits of plausibility and well beyond but it does so with such cheerful insouciance that one can’t help forgiving it. It even includes an aerial dogfight!

Till Death Do Us Part boasts a truly inspired climax, with a wonderfully inventive murder method and a tense battle of wills as the Commissioner faces what promises to be a very nasty fate indeed. A very fine episode.

An Elementary Case of Murder is more straightforward, with much less humour but there is a certain boldness about the solution.

There are some wildly implausible elements to this series. I seriously doubt that any real Police Commissioner would spend so much time (or in fact any time at all) out on the streets chasing suspects, and of course in most episodes either the Commissioner or his wife always seem to be personally involved in the most unlikely cases. This does however seem to be quite deliberate and conscious - this is a show that makes no concessions whatsoever to realism. This is a fantasy world in which Police Commissioners look like glamorous movie stars who are also action heroes and they have gorgeous wives. It’s a feature not a bug and it’s another deliberate echo of the golden age of the  detective story. 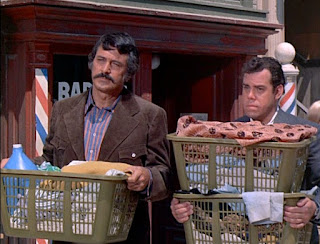 There are numerous running gags - every episode has McMillan caught in a traffic jam, in every episode most of the city seems to be on strike and poor Sergeant Enright seems destined never to get a good night’s sleep or a proper meal.

Rock Hudson’s 70s fashion victim wardrobe will provide additional amusement. In The Easy Sunday Murder Case he wears a jacket that even Jason King would have had second thoughts about.

McMillan and Wife is best considered as a television variant of the literary form that was becoming known as the cozy mystery. In fact it has all the ingredients of the cozy - it’s light-hearted, deliberately and consciously old-fashioned, it’s played as much for laughs as thrills and it features a very engaging husband-and-wife detective team. It’s lightweight but it’s consistently enjoyable if sometimes slightly silly fun.

McMillan and Wife is readily available on DVD in all regions. Recommended.
Posted by dfordoom at 07:04