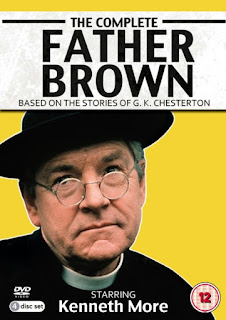 G. K. Chesterton’s Father Brown detective stories are unusual not just in having a Roman Catholic priest as the crime-solver but also in looking at crime from a religious, moral and spiritual vantage point. That’s not to say that you have to be a Catholic to enjoy them, but the Catholic perspective is there. Crime is more than just a mere puzzle in these tales - the problem of evil takes centre stage and it’s Father Brown’s understanding of the nature of evil that often leads him to the solution.

They might sound like the sorts of stories that won’t lend themselves readily to television adaptation but it fact ATV’s 1974 Father Brown series did a remarkably fine job. The success of the series is due in large part to Kenneth More’s performance in the title role. He adroitly avoids the trap of making the priest detective sanctimonious or intellectually arrogant and his inherent likeability carries the show effortlessly.

These are definitely unconventional detective stories, dealing with cults (The Eye of Apollo), satanism (The Dagger with Wings), spies (The Mirror of the Magistrate), archaeology (The Curse of the Golden Cross) and alcoholism, suicide and redemption (The Three Tools of Death).

While they might deal with serious subjects don’t get the idea that this series is grim and humourless. The genius of Chesterton was to be able to deal with such themes while still writing stories that were enormous fun and the TV series is just as enjoyable.

Great detectives usually have a sidekick. In Father Brown’s case this role is filled by suave French private detective (and ex-criminal) Hercule Flambeau.

The first of the thirteen episodes, The Hammer of God, sets the tone. Colonel Bohun (Graham Crowden) is an arrogant, vicious, cruel and capricious man and a notorious womaniser. No-one is greatly surprised when he comes to a violent end but the crime seems to be quite impossible. There are suspects but they could not have committed the crime. It’s not a question of alibis but of simple physical strength. No-one could have murdered Bohun in the way he was murdered but he was murdered just the same. Father Brown is as puzzled as anyone until a chance remark sets him on the right track. Great supporting performances by Graham Crowden and William Russell (as the Colonel’s meek clergyman brother Wilfred) are a highlight. 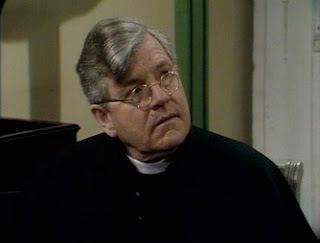 Father Brown solves the puzzle but merely solving puzzles is not enough for him. He is less concerned with helping the police make an arrest than he is with the spiritual fates of those involved.

The Mirror of the Magistrate presents Father Brown with the problem of the murder of a distinguished judge. The circumstances of the murder seem clear enough but the little priest has his doubts. He has even graver doubts about the most promising suspects. When he forms the opinion that a particular man is incapable of murder he sticks to his view and more often than not the facts will prove him to be correct. This might seem like an excessive reliance on mere intuition but a good priest knows a thing or two about psychology.

As I mentioned earlier Chesterton’s detective stories had a definite Catholic slant so perhaps Father Brown can tell a man’s innocence not by looking into his mind but by looking into his soul. That’s not to suggest that he solves mysteries purely by such methods - he also uses a good deal of logical deduction.

The Quick One is a more straightforward tale of detection, although in this case the victim does get murdered twice. Father Brown solves this one mainly through careful observation of apparently trivial things aided by logic.

The Dagger with Wings presents Father Brown with a truly formidably adversary - the Devil himself. Well, perhaps not the Devil in person but certainly one of his faithful minions. A tale of black magic which Father Brown solves by the application of logic.

Theatrical mysteries happen to be one of my passions and The Actor and the Alibi is a very good one. It neatly combines a locked-room mystery with an unbreakable alibi. 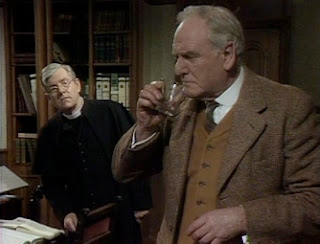 The Eye of Apollo is especially interesting. Flambeau has just moved into his new office. There are as yet only two other tenants, a secretarial agency and a religious cult leader. The secretarial agency is run by two sisters. Their aunt (a truly appalling woman) has settled most of her fortune on the older sister Pauline who is as head-headed (and hard-hearted) as her aunt. Although perhaps not entirely hard-headed as she has become a true believer in the Cult of Apollo run by the obviously shady Kalon. Kalon believes that if you have enough faith you can stare directly into the noonday sun without any ill effects.

The crime that naturally follows is certainly very close to being the perfect crime. Like Father Brown the viewer is sure of the identity of the criminal, the difficulty being how on earth he could possibly have committed the crime.

The Head of Caesar is a tale of blackmail but with some clever twists. A wealthy young woman has, rather foolishly and impulsively, stolen an extremely valuable Roman coin to give to her lover. She is prompted to this act of romantic folly by the coincidence that The head of Caesar Augustus on the coin bears a striking resemblance to her lover. The coin happens to belong to her brother. Now she finds herself the victim of blackmail but it seems impossible that anyone could have known of her theft.

The murder in The Secret Garden is an impossible crime story. The head of the Paris police, Aristide Valentin (Ferdy Mayne), is hosting a dinner party at his home in Paris. His home is built like a fortress and the garden can only be reached through the house - it is surrounded by a high wall (without any gate) topped with spikes. Nevertheless one man, now dead, has managed to find his way into the garden and another man has found his way out. Since the house has only one door which was locked and bolted this was simply impossible.

The Curse of the Golden Cross involves no less than three curses and mysterious death threats against an American professor. Professor Smaill had caused something of a sensation with his discovery an unusual Byzantine gold cross a few years earlier. At the time of his discovery, as he explains to Father Brown on the voyage to England, he was threatened with death. The threat was made by a person he could not see and he has no idea of the person’s identity. The reason the professor is on his way to England is to investigate a report that an identical cross has been found beneath an English country church. Along with the cross is a mummified body, mummified in a manner previously quite unknown outside Egypt. The body and the cross are guarded by three terrifying curses. 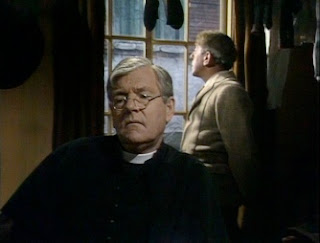 The professor is convinced that one of the passengers on the ship is his would-be assassin so he is more than a little alarmed when all the passengers suddenly turn up in the village in which the new find has been made. Tragedy will strike, not once but twice. The solution, delightfully and brilliantly, hinges on a proper understanding of mediaeval civilisation.

The Man with Two Beards illustrates Father Brown’s methods quite well. He first finds the answer to the mystery through his knowledge of the human heart. He then proceeds to prove his case through logic. A once-notorious but now reformed burglar known as Michael Moonshine has apparently become active once again but this time he has added murder to his repertoire. It all seems straightforward if tragic, apart from the puzzle of the two beards.

The Oracle of the Dog is a classic country house mystery with all the expected elements - there’s the rich landowner who has just changed his will, providing a possible motive. There’s a small group of possible suspects and plenty of possible other motives among them. There’s an impossible murder. And then there’s the dog. Father Brown has no patience with the idea of a dog as a witness to murder but on the other hand the dog may provide an important clue.

The Three Tools of Death is a case of too many murder weapons. A wealthy philanthropist and temperance campaigner is murdered. In the room where the murder took place were a gun, a knife and a rope. But none of these weapons caused the man’s death. This story is a salutary warning of the harm that excessive cheerfulness can do. Father Brown also learns that being a confessor and a detective don’t mix.

The Arrow of Heaven is most notable for the truly outlandish setting - and the outlandish characters. Millionaire Brander Merton lives in a bizarre concrete tower that is more like a high-tech fortification than a home. There is only one window and that’s in Merton’s room at the top of the tower. There is only one entrance and the tower is guarded by dogs and armed guards. Merton has recently purchased, for an enormous sum, a relic known as the Coptic Cup - and a curse associated with the cup is reputed to have caused the deaths of the two previous owners. 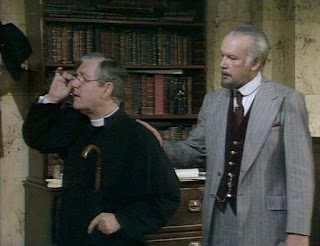 Brander Merton has surrounded himself with an odd household. There’s his brother Colonel Merton, an old Indian fighter who claims to have fought at the Battle of Little Bighorn. There’s the colonel’s vivacious aviatrix daughter. There’s Brander Merton’s rather superior secretary, and then there’s the decidedly disreputable former crime journalist and purported art critic Norman Drage. The bizarre setting seems to have inspired the cast to deliver wildly exaggerated larger-than-life performances. There’s also an apparently impossible crime. It’s a heady brew but it works and it’s a lot of fun.

Kenneth More is without doubt the definitive Father Brown. He’s kindly without being overly sentimental, he regards the world with the right mixture of amusement and compassion and he’s brilliant in a very self-effacing way. There’s real strength to the character. Despite being an apparently insignificant little man he’s quite fearless and while his religious faith is very obvious he doesn’t bludgeon people over the head with it. More’s performance is good-humoured and has a wonderful lightness of touch. He also seems physically right for the part - Chesterton continually refers to his hero as the little priest and More fits the description. He also carries that umbrella as if it’s part of him.

Most episodes stick quite closely to Chesterton’s original stories with any divergences being minor. An extra sub-plot is for example added to The Curse of the Golden Cross but that seems to be mostly because of the need to expand a short story to make it fit a one-hour television timeslot. The changes do not alter any of the essential plot elements nor do they detract from the Chestertonian feel. Occasionally they even improve things - there is an element of social observation in The Man with Two Beards that is made both more subtle and more interesting in the TV version.

This is a very fine series indeed. It’s a little offbeat but never excessively so, it makes its points without preaching, it looks good, the scripts are excellent and most of all there is Kenneth More’s delightful interpretation of the role. Immensely entertaining and very highly recommended.

The series has been released on DVD just about everywhere so availability should be no problem at all.

You might also be interested in my review of the 1914 Chesterton collection The Wisdom of Father Brown, and of the 1954 Father Brown movie adaptation.
Posted by dfordoom at 06:11