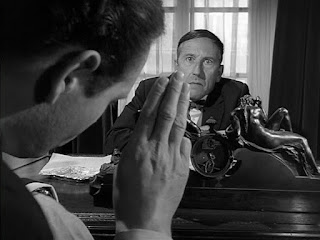 A commenter recently suggested that The Ubiquitous Mr Lovegrove, a 1965 Danger Man episode, could be seen as another precursor to Patrick McGoohan’s celebrated series The Prisoner.

Having just watched this episode I think it is a valid point. Certainly the tone is reminiscent of The Prisoner, and the blurring of reality and illusion, and the very subtle hints of surrealism, all do tend to confirm the point. There’s even an odd hand signal, rather like the one in The Prisoner.

John Drake finds himself in trouble with his boss, Mr Lovegrove, for owing a large amount of money to a gambling club. Gambling is a weakness that cannot be tolerated in an agent, making him far too vulnerable to blackmail. The only problem is that Drake has never even been inside the gambling club in question.

Drake decides it might be a very good idea to pay a visit to this club. It’s obvious that something is going on there - it’s certainly no innocent gambling den. Drake is puzzled, and he’s even more puzzled when he sees Mr Lovegrove there. In fact Mr Lovegrove seems to be everywhere. 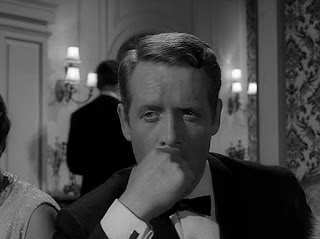 Drake seems to be getting further and further into Mr Lovegrove’s bad books plus he finds himself being blackmailed and to cap it all off he’s getting drawn into the web of a somewhat annoying predatory (if good-natured) widow.

The ending will annoy some viewers while others will be infuriated (which is of course the effect that the final episode of The Prisoner had). To be fair though the ending should not come as a surprise - it is pretty thoroughly foreshadowed.

Another link to The Prisoner is that this story also deals with identity.

Along with Colony Three (a brilliant episode) The Ubiquitous Mr Lovegrove does seem to suggest that in some ways The Prisoner was a logical offshoot of Danger Man. Both episodes are just a little on the experimental side and both have a disturbing quality to them. They give the impression of being attempts to push the edge of the envelope as far as television spy fiction was concerned.

The Ubiquitous Mr Lovegrove is quite amusing with McGoohan’s oddly detached  performance working rather well. Worth a look.
Posted by dfordoom at 03:46