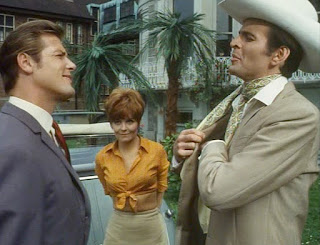 The Ex-King of Diamonds was the fourth-to-last episode of the final season of The Saint. Broadcast in January 1969, this episode is of more than usual interest to cult TV fans since it served as a sort of unofficial pilot for The Persuaders!

The idea was to give Simon Templar a partner. The partner would be someone who would provide a complete contrast to the smooth cultured English Templar. He would be a brash American, Rod Huston. Not just an American, but a Texan. A Texan oil millionaire. Despite their differences in style there would be some similarities between them - like Simon Templar Rod Huston is a rich playboy type, rich enough that money is no longer a motivation for him. And like Templar he would have an innate sense of fair play - the sort of man who would amuse himself by righting wrongs.

Stuart Damon (better known as one of the stars of The Champions) was cast as Rod Huston. And he really goes to town with the part. He throws every possible rich Texan oil millionaire cliché into his performance but it works. This is after all an ITC action adventure series - nobody is supposed to take it seriously.

The episode has plenty of things going for it. The story is a good one. A deposed king (King Boris, played by Willoughby Goddard) is financing a revolution by cheating at cards. Cheating on the grand scale - he intends to win several million dollars at the casino at Monte Carlo. And with the ingenious method of cheating that he has devised it appears that nothing will be able to stop him. The only possible problem is brilliant French mathematician Henri Flambeau (Ronald Radd) who knows all the odds when it comes to games of chance. 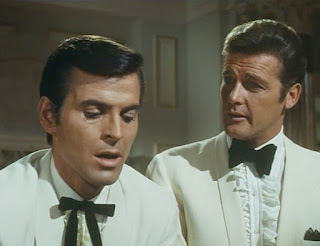 The Saint and Rod Huston clash violently at first, in fact they spend most of the first half of the episode trying to beat one another senseless (this adversarial relationship would be repeated in the opening episode of The Persuaders!) but of course eventually they learn to work together.

The Simon Templar-Rod Huston partnership worked successfully enough to convince Lew Grade that it would be a winning formula for a series. A few modifications would be made - Roger Moore would become Lord Brett Sinclair and Tony Curtis would play a brash self-made millionaire from the Bronx rather than a Texas oilman - but the basic formula was obviously sound. The Persuaders! was a great series and there’s no question that Tony Curtis proved to be the perfect foil for Roger Moore although it is a bit sad that Stuart Damon (who hoped to reprise his role as Rod Houston in that series) missed out.

The Ex-King of Diamonds is not just interesting as the forerunner to The Persuaders! - it’s a superb and very very enjoyable episode of The Saint in its own right. Very much worth a look.

This episode is of course to be found in various boxed sets of The Saint but it's also included as an extra  in Network's The Persuaders! DVD boxed set.
Posted by dfordoom at 01:21