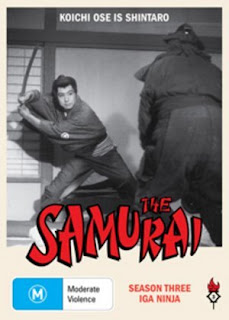 Onmitsu kenshi (Spy Swordsman) was a Japanese TV series made between 1962 and 1965. The English-dubbed version was retitled The Samurai. It was very successful in Japan and also did quite well in New Zealand and the Philippines. It attracted very little attention elsewhere in the world. Except for one place - Australia. In Australia it became more than just a cult sensation. It was the Nine Network’s highest-rating series. It was a bona fide pop culture phenomenon. It was the first TV series screened on Australian television to spawn a marketing frenzy. Soon Australian youngsters were running about all over the country dressed in ninja suits.

When star Koichi Ose toured Australia he was greeted at Sydney Airport by crowds larger than those that had turned out the previous year to greet The Beatles. The Samurai was not just a smash hit among boys - Koichi Ose apparently had a fairly significant and devoted female fan base as well. He was an unlikely sex symbol, but perhaps both the character and the actor were simply so different from anything that an Australian female was likely to encounter in the opposite sex at that time. The character he played, the samurai Shintaro Akikusa, was certainly not lacking in the manly virtues. He was brave and noble. He was good-looking. He was also kind and gentle and there was a touch of humour. Koichi Ose in person came across as a somewhat shy and very charming man, and when he was interviewed on Australian television more than forty years later the charm and the humour were still very much in evidence, along with some very fond memories of the series.

The series contained, for its time, much more violence than was usual in children’s TV. The violence was however so stylised that nobody really seemed to notice. It also provided Australians with their first taste of martial arts and Japanese swordplay.

There were plenty of British and American action adventure series around at the time but The Samurai made them all look rather dull and unimaginative. Not only did the Japanese series have more action, the action was much more stylish. The storylines (the complete series ran to ten story arcs and a total of 128 episodes) were more ambitious. The series was made on a relatively small budget but the locations were well chosen, the period detail was good (it set in the 18th century during the Tokugawa Shogunate), the costumes looked great and in general the production values were more than adequate. Most of all it had (in the 1960s) a wonderfully exotic feel to it. 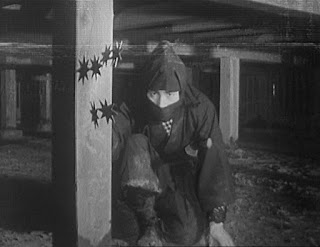 It also had a coolness rating that was right off the scale. Not just lots of sword-fighting but the ninja make frequent use of star knives (or shuriken), small star-shaped throwing knives, which were even cooler. The ninja also had the exciting ability to leap directly upwards to great heights and there were various other exotic types of weaponry in evidence (such as a rocket launcher). Ninja were even adept at underwater warfare!

Japanese movies of the postwar period mostly adopt a rather sceptical (if not outright hostile) attitude towards Japan’s feudal past and towards the code of honour of the samurai. Interestingly though this series takes a different approach. It takes the hierarchical nature of feudalism for granted. It does not occur to Shintaro to question the social privileges of rank that he enjoys, or to question the deference which his social inferiors display towards him. On the other hand he is very much aware that rank brings responsibilities as well as privileges. Although Shintaro appears to be a wandering ronin we soon discover that this is not the case. He is a very high-ranking member of the nobility - a close relative of the shogun. Shintaro could live a life of luxury and leisure. Instead he risks his life in the service of the government, because his sense of duty and honour compels him to do so. He takes the code of bushido quite seriously, although he tempers the stricter aspects of this code with his innate sense of mercy.

Shintaro does not merely serve the government. If he encounters a person in trouble he will unhesitatingly risk death in order to help them, even if the person in trouble is a humble peasant. A samurai must live his life honourably and be prepared to die honourably. Not that Shintaro wants to die - he is by nature a man who loves life. But he knows where his duty lies. This rather positive attitude towards both feudalism and the warrior code of the samurai is rather refreshing. 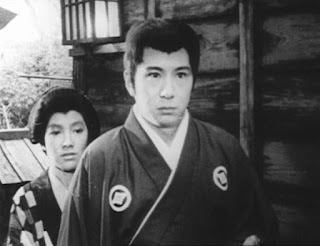 The overall tone of the series is much darker than anything you will find in British or American children’s television at this time. Violence has consequences. Being an agent for the shogun’s government is genuinely dangerous. It involves a very real risk of death, and it requires Shintaro to be wiling to kill. In fact the tone is rather grown-up, to an extent that makes me question whether it was ever actually intended as a children’s series at all. There’s enough complexity to make it the kind of series that adults should have no difficulty in enjoying. Despite the sometimes dark and tragic themes there is however no trace of the fashionable cynicism and moral nihilism that has come to plague modern popular culture in the west. The Samurai makes no bones about the existence of evil and makes it clear that the fight against evil is a difficult one. It is however a fight worth fighting. Evil can be beaten, even though the costs are often high. Courage and honour are not futile. And even though there is no guarantee of success in every case it is better to die with courage and honour than to accept the triumph of evil.

Iga Ninjas was the third story arc, first airing in Japan in 1963. The lord Matsudaira Sadanobu has set out on a secret mission to Kyoto, hoping to foil a plot by the lord Owari to gain control of the government. Owari has employed the services of the sinister Momochi Genkurō (Toshiyuki Katsuki) and his ten renegade Koga ninja to assassinate Sadanobu. Shintaro is reluctantly persuaded to act as Sadanobu’s bodyguard (Shintaro has grown tired of killing and would prefer to live in quiet retirement. This story arc introduces one the most popular characters in the series, the Iga Ninja Tombei the Mist (Fuyukichi Maki). Tombei and his Iga ninja will provide valuable help to Shintaro.

Tombei is more than just a sidekick for the hero. He is a brave and skilled ninja and a clever tactician who saves Shintaro’s life on more than one occasion. Tombei is definitely not the sort of sidekick who needs to be constantly rescued from danger by the hero. 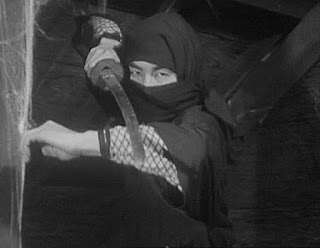 It’s not that easy to maintain a consistent level of excitement and suspense over the course of a thirteen-episode story arc but writer Masaru Igami manages to do just that while also ensuring that each half-hour episode has its own distinctive features. It’s an achievement that most modern television writers would struggle to emulate.

The level of inventiveness displayed by this series is impressive. There are countless fight scenes but there is always some new variation to keep things interesting. Ninja have plenty of tricks up their sleeves and it’s fun anticipating what each new trick will be. While the basic storyline for this arc is simple - it’s basically the kind of story familiar in westerns, where a wagon train has to fight its way to its destination while being menaced by murderous bandits. Masaru Igami however manages to embroider this simple basic tale with numerous sub-plots involving treachery and Genkurō’s seemingly endless supply of fiendish and outlandishly ingenious schemes to kill Lord Sadanobu. Genkurō employs rocket launchers, gas attacks, a glamorous but deadly lady ninja, a ninja who can steal people’s faces, explosives and all manner of ninja magic.

It’s never explicitly stated but it’s implied that ninja magic is mainly a combination of illusionism, trickery, chemical agents and perhaps hypnosis rather than anything supernatural.

The Samurai offers excitement, intrigue, adventure and imaginative fight scenes all done with style and also with surprising intelligence and subtlety. It has its dark moments, even tragic moments. It achieved massive popularity in Australia as a kids’ series but in fact it compares very favourably with most action adventure series aimed at adults. Very highly recommended.