Christmas with Steed and Mrs Peel - Too Many Christmas Trees 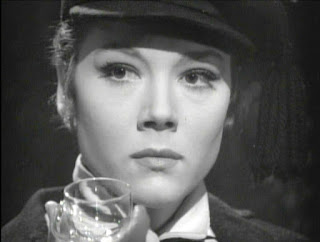 I suppose one should make an effort to get into the seasonal spirit, and sharing Christmas with Steed and Mrs Peel seemed like a pretty good way to do just that. In other words I have just revisited one of the most-loved of all episodes of The Avengers, Too Many Christmas Trees, which first went to air in Britain exactly 50 years ago.

This was one of Tony Williamson’s earliest scripts for the series and it’s a corker. Steed is having recurring nightmares, Christmas nightmares complete with a sinister Santa, a forest of Christmas trees and a corpse. The corpse of a fellow agent, suspected of treason, who has just died as a result of a complete mental collapse.

Mrs Peel has been invited to spend Christmas at the country house of Dickens fanatic Brandon Storey. Storey owns a priceless collection of Dickens memorabilia and his whole house is Dickens-themed - there’s even a Hall of Great Expectations complete with cobwebs. Mrs Peel decides to invite Steed to accompany her, hoping to keep his mind off the nightmares. But the nightmares just get worse.

I’m not going to reveal any plot details other than to say that this is an episode that veers strongly in the direction of the macabre, the uncanny and the paranormal.

One of the delights of this episode is that everything meshes and interconnects perfectly. Apart from his love of Christmas Charles Dickens also had a love for ghost stories and mysteries so a Christmas episode involving Dickens and the uncanny is wonderfully appropriate. Mervyn Johns who plays Brandon Storey had been one of the stars in the classic 1951 film adaptation of A Christmas Carol, which also featured a young Patrick Macnee. Mervyn Johns had also starred in the superb 1945 anthology film Dead of Night which had an eerie atmosphere of nightmare and reality becoming hopelessly confused -exactly the atmosphere this episode is aiming for. 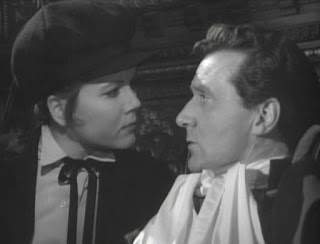 There are Avengers-related in-jokes as well, with Steed getting a Christmas card from Cathy Gale - from Fort Knox! Williamson’s script provides witty dialogue in abundance and Macnee and Rigg are in sparkling form. Rigg was always great at handling the comic side of things but in this story she also gets a couple of opportunities to show her serious acting chops. The Steed-Mrs Peel relationship is also thrown into sharper focus as Mrs Peel shows her genuine affection for Steed when she thinks he’s in real trouble.

Roy Baker directed this episode and he succeeds beautifully in getting the tone just right. The sets and costumes are top-notch. The dream sequences are spooky and surreal and genuinely dream-like.

All this would be enough to make Too Many Christmas Trees a great episode but we get even more - Diana Rigg looking as cute as a button dressed as Oliver Twist, an excellent and imaginative climactic fight scene, a nicely romantic tag scene and Steed and Mrs Peel singing together. If Christmas is a time for indulging oneself then this episode is a glorious indulgence indeed. It’s like a magnificent Christmas dinner with all the trimmings accompanied by the finest wines and followed by the finest port and cigars.

And by the way, Happy Christmas to all my readers!
Posted by dfordoom at 20:46