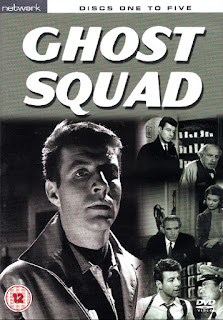 Ghost Squad was a very successful ITC series that ran on British television from 1961 to 1964 (with the title changed to G.S.5 for the third season). The Ghost Squad is part of Scotland Yard and specialises in undercover operations and was inspired by a real-life squad that operated as part of the Metropolitan Police.

I reviewed the first season in an earlier post.

There is some debate about when the second season actually started. The first season was a co-production with the Rank Organisation and was shot on 35mm film. It was to comprise thirteen episodes. Due to a strike production of the last three season one episodes (The Green Shoes, Princess and Death from a Distance) was delayed and they eventually went to air as part of season two.

Rank dropped out of the picture after the first season and seasons two and three were produced entirely by ITC, and were shot on videotape.

The first two seasons survive in their entirety while the whole of season three has been lost.

ITC always favoured the idea of using imported American actors in their action adventure series so it’s no surprise that the star is an American, Michael Quinn, who plays undercover agent Nick Craig.

For some reason it was decided during season two to introduce a second lead character. Tony Miller, played by English actor Neil Hallett, is another Ghost Squad agent. The series then alternates between Nick Craig cases and Tony Miller cases. There’s nothing at all wrong with Neil Hallett’s acting but he does not quite have Michael Quinn’s easy-going charm and charisma.

The first season featured Donald Wolfit as the head of the Ghost Squad, Sir Andrew Wilson. He disappears in the second season to be replaced by Anthony Marlowe as Geoffrey Stock as the squad chief, although Gordon Jackson takes over as chief in one episode. The second season also introduces Claire Nielson as Stock’s Scottish secretary Jean Carter. 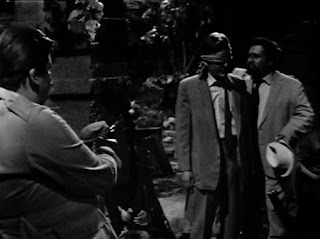 The Green Shoes, which was either the eleventh episode of season one or the first episode of season two depending on your point of view, is a competent spy thriller story. Scientists at a British nuclear research facility have discovered a new element. The discovery is not just of great scientific importance, it also has enormous military significance. It will make the development of a neutron bomb a real possibility. Security at the facility is so tight that there is no danger of the new element being stolen, but of course it is stolen and the Ghost Squad have to recover it. The matter is urgent, the element being extremely radioactive. The episode was photographed by the great Nic Roeg.

Doubles were something of an obsession with writers of television spy series during the 60s. Interrupted Requiem uses the double idea quite effectively. A scientist working on a British missile project has been persuaded to refuse to do any further work on the project when his daughter’s life is threatened by agents from the eastern European nation of Ordania. But his daughter is already dead - she died in an air crash two years earlier. So what is going on? It’s up to Nick Craig to find out and that means going to Ordania. His cover story is that he is a salesman for a toy manufacturer.

Interrupted Requiem plays like an episode of Danger Man but Nick’s toy salesman cover and a comic supporting performance by Derek Nimmo as a British Embassy official in Ordania adds just a hint of the flavour of The Avengers. It’s a fine episode with a good script by Bill Craig. 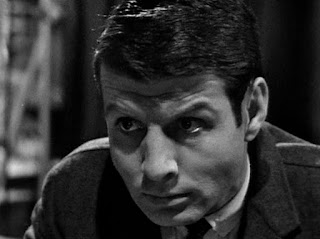 The Big Time is a very impressive episode. Nick Craig has to find a very small-time bag snatcher who got more than he expected when he stole a handbag containing £70,000 worth of uncut diamonds. He is now in the big time - but the big time can be very dangerous for a small time sneak thief. The script by Leon Griffiths offers a nice combination of suspense, humour and pathos with some surprisingly subtle characterisation. This episode was directed by the very talented Peter Sasdy who went on to have a good carer in films. Network’s DVD set includes an audio commentary by Sasdy for this episode. Sasdy always does good audio commentaries and this one is typical. He was a director whose approach to television was quite ambitious and he was clearly trying (with some success) with The Big Time to do something a bit more than just a run-of-the-mill crime story. The Big Time is an example of how good ITC’s action adventure series could be on those occasions when they were lucky enough to have a good director working from a good script. It’s also a demonstration of how effective the early 60s shot-on-videotape style of television could be when it was done right.

Sentences of Death is another excellent Peter Sasdy-directed episode, with Craig drugged and forced to reveal vital information.

East of Mandalay is very much in the Danger Man mould with Tony Miller investigating gun-running in a small South-East Asian country. A British mining company appears to be involved in supplying arms to anti-government rebels. The highlight is Denis Shaw’s scenery-chewing performance as rebel leader Ah Tok.

The Golden Silence is a crime rather than an espionage story, dealing with gold smuggling. It’s another Tony Miller story, with Tony posing as a courier for the smugglers. It’s a reasonably tale enlivened by good supporting performances by David Garth as a crooked Treasury official and David Lodge as the cheerful but vicious Max, who provides the muscle for the smugglers. 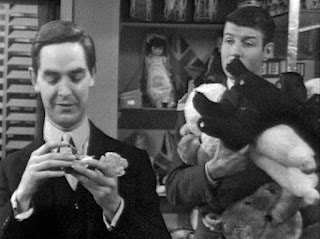 In The Man with the Delicate Hands a man is killed in a car accident. Although the body is burnt more or less beyond recognition there seems to be no doubt of his identity but his sister insists that the corpse is not her brother. Her brother had thin delicate hands while the corpse has coarse stubby hands. The Ghost Squad gets involved because the man has access to financial secrets worth millions and it is vital to know if he is really dead or not.

In Escape Route Nick Craig learns just how dangerous and unpleasant being an undercover cop can be. A derelict has been killed by a car in Australia. The odd thing is that he was an embezzler who had escaped from justice in the UK with a very large amount of money. So how did he become a penniless derelict? Nick’s boss suspects that someone helped the man escape from the British police but clearly something went wrong. Nick goes undercover posing as another embezzler keen to depart for foreign climes and he learns that escaping is not such an easy thing.

The Missing People is a particularly fine episode. Tony Miller goes undercover as a pilot to infiltrate a gang smuggling people out from behind the Iron Curtain. Not that the British government is overly concerned about the idea that people are escaping from the communist bloc, but the trouble is that once they escape they are never seen again.

Ghost Squad has a surprisingly dark tone with some stories being really quite hard-edged (although there are lighter moments). On the whole the series doesn’t suffer quite so badly as most early 60s British series from the characteristic studio-bound feel of that era. Obviously the exotic locales are faked with stock footage and with a minimal amount of location shooting but visually it’s not too bad and the strong writing (stronger than most of its ITC stablemates) is enough to keep the viewer interested enough to overlook the studio shooting.

This is a rather ambitious series with a more serious tone than other contemporary ITC series like The Saint. It was one of the first ITC series to adopt the hour-long episode format and it makes good use of the format to tell fairly complex stories. On the whole it’s an enjoyable well-written well-crafted series with a mix of crime and spy stories. Highly recommended.