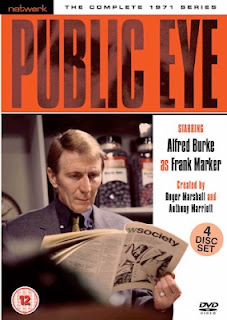 All but a handful of the ABC episodes are lost but happily all the Thames episodes survive.

When Roger Marshall and Anthony Marriott created the series they had a very definite aim in view - Public Eye would strip away the glamour and the tough guy aura from the private eye genre. The hero, Frank Marker, would be a very ordinary private detective (or private enquiry agent as they were usually known in Britain). He would handle the sorts of cases that an actual private enquiry agent would handle - a bit of divorce work, missing persons cases, credit checks and other routine matters. While Marker is no wimp he dislikes violence intensely. Fortunately violence is rather uncommon in the usual run of cases that such a man would deal with.

Marker is very unglamorous indeed. He is middle-aged, he doesn’t own a car, he most certainly does not own a gun, he is no fashion plate (he is often a bit on the dishevelled side), he is more at home with a pint of bitter and a packet of crisps than sampling vintage wines or gourmet food.

It all sounds deadly dull. It isn’t. It’s not only intelligent and thoughtful television, it’s immensely entertaining and totally fascinating. It success stems from the soundness of the original idea, the consistently high quality of the scripts and the superb performance of Alfred Burke as Marker.

Public Eye was made in the usual style of late 1960s/early 1970s British TV - shot on videotape in the studio with a relatively small amount of outdoor shooting on film. Towards the end of its run Thames contemplated switching the series over to the new style that their subsidiary Euston Films had pioneered with Special Branch and The Sweeney - series shot entirely on film with much more location shooting, faster pacing and much more action. Alfred Burke felt that this would be a very bad idea indeed and decided to call it a day, and thus this very popular series ended with the 1975 season. Burke was absolutely correct - Public Eye would never have worked in this new style. The older shot-on-videotape-in-the-studio approach suited the material perfectly, giving it a slightly seedy and slightly claustrophobic feel and allowing the emphasis to be on character rather than action. 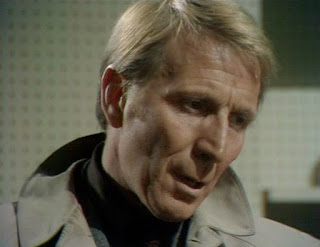 At the time this series was made British television was also moving towards a focus on gritty realism, violence and cynicism. Public Eye adopted a slightly different approach. While it can be at times quite dark and it does have its own distinctive style of kitchen-sink realism and can be quite gritty it never really succumbs to cynicism. It certainly never succumbs to nihilism or despair. Frank Marker might be a very down-at-heel private eye who makes a very modest living out of the game he is not a man given to despair or self-pity. He mostly enjoys his work. Sometimes it’s a bit sordid but it can be interesting and it beats digging ditches for a living. And besides, it’s all he knows. He has his share of troubles and setbacks, even serving a term in prison after being set up by a client, but Marker is the kind of guy who picks himself up again and gets on with life. He doesn’t feel sorry for himself and he doesn’t need anyone to feel sorry for him. He’s unmarried and a loner but on the whole he finds the human race to be quite interesting and even worthy of a certain guarded affection.

The rather short Season 4 had been something of an experiment. Each episode had a self-contained plot but there was also an overall story arc, following Marker’s (successful) attempts to get back on his feet after being in prison. Season 5 followed a more conventional format with no ongoing story arcs. It also saw Marker relocate from Brighton to Windsor.

Marker’s office in Windsor sets the tone of the series exceptionally well. It’s a poky shopfront and there is no glamorous secretary to answer the telephone because Marker can’t afford a secretary. Just inside the door there are bookshelves - all of them completely empty! This could be a depressing or even a pathetic touch but oddly enough it isn’t. Frank Marker doesn’t believe in cluttering up his life with anything that is not strictly necessary and it would never occur to him to fill the bookshelves just to make a good impression. 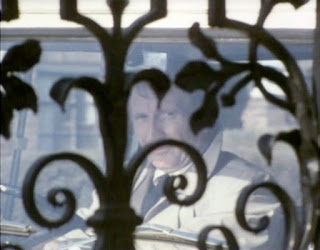 Who Wants to Be Told Bad News? is a particularly fine episode demonstrating the masterful way in which the writers on this series could make great stories out of the most seemingly mundane cases. In this instance it’s a credit check. It seems that a remarkable number of people just don’t want Marker to help then.

The Man Who Didn't Eat Sweets shows that checking up on an unfaithful husband can produce results that can even surprise the most hardened private detective.

Ward of the Court presents Marker with one of those cases he wishes he hadn’t taken on. He has to find a father who has taken his son from his estranged wife. Although he’s working for the mother he finds himself in sympathy with the father, but to make things more difficult he can still see the mother’s point of view and in fact both parents seem more intent on hurting each other than on the boy’s welfare. Not an especially pleasant job, but he’s taken it and now he can see no alternative other than to see it through. An episode typical of the moral complexity of this series - sometimes you have two choices and whichever you choose someone gets hurt.

Transatlantic Cousins is the type of episode that really illustrates the genius of this series. Marker takes on a case that is remarkable for being so trivial and minor. In a conventional private eye series the case would of course turn out to be something much more serious. Public Eye avoids that kind of obviousness. The case really is as trivial as it seems to be. Marker encounters a wealthy American tourist named John L’Etrell in an antique shop. The American, whose family went to the US in the 18th century, wants to find his long-lost English cousins. What he finds is an English baronet who is a shocking old reprobate. 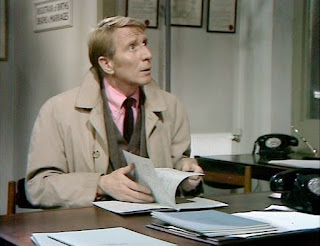 That’s all there is to the story. There are no crimes, no conspiracies, no deep dark family secrets. And yet this episode is compulsively watchable. It’s a finely crafted piece of social observation. Not social criticism, just social observation. It’s about real people and no matter how trivial it might all be to the people involved these things are important. Real people do concern themselves with matters that appear trivial to outsiders. And these are real people - what makes it especially interesting is that at first they seem to be stereotypes, but actually they aren’t. John L’Etrell seems to be the archetypal brash American tourist but he’s actually a pretty decent guy. His daughter seems to be the archetypal rebellious daughter but she isn’t. Despite initial appearances she loves her father and she respects him. Sir Roger L’Etrell seems to be the archetypal wicked old aristocrat but he’s really a rather sad old man. James Doran’s script displays the perfect lightness of touch.

Shades of White is somewhat darker. A rich man wants Marker to check up on his teenaged daughter’s wild friends. Marker discovers things he would be have been happier not knowing and his faith in human nature takes a bit of a knock. We know he’ll get over it, he always does, but it will hurt for a while. John VII. Verse 24 is another story that has a somewhat serious tone. Marker is employed by a policeman who claims to be victimised by a corrupt senior officer. This is the sort of case that Marker really prefers to avoid like the plague. There’s just too much potential for serious aggravation and the last thing Frank Marker wants is trouble with the police. It’s his stubborn streak that makes him stick to this case. When someone warns him off a case he digs his heels in.

Generally speaking I’m not a great fan of television series (or movies) that aim for absolute realism. My tastes tend to run more towards the fantastic and the baroque (series like The Avengers). If you’re going to aim for absolute realism you really have to do it well. Public Eye does it very very well indeed. It’s an object lesson in how to take apparently mundane  subject matter and turn it into fascinating and very entertaining television, helped by great writing and Alfred Burke’s superb acting.

The four Thames TV seasons have all been released on DVD by Network, as have the surviving ABC episodes (as Public Eye: The ABC Years).