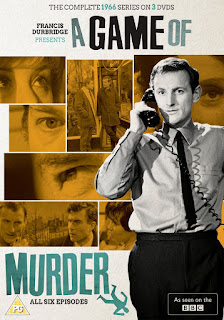 Francis Durbridge wrote some very successful mystery novels (such as Send for Paul Temple) but his fame rested to a much greater extent on his prolific output of radio and television scripts. As a writer for these media he had few peers.

He wrote no less than seventeen mystery serials for the BBC. The eight serials broadcast between 1952 and 1959 under the umbrella title The Francis Durbridge Serial are all lost. Fortunately ten of the eleven serials that went to air between 1960 and 1980 the title Francis Durbridge Presents survive in their entirety. Happily most are now available on DVD. The surviving episodes of the BBC's excellent 1969-71 Paul Temple TV series are also available on DVD.

A Game of Murder was screened in 1966 and stars Gerald Harper (who was also being seen in the BBC’s delightful adventure series Adam Adamant Lives! at about the same time).

A Game of Murder gets off to an excellent start with the first of its six 30-minute episodes. Bob Kerry, a once famous golfer who now runs a sporting goods store, is killed in a tragic accident on the golf course. His son, Detective Inspector Jack Kerry (Gerald Harper), cannot bring himself to accept the verdict of accidental death. He has no evidence to the contrary, just a feeling that something is not quite right.

The first indication that his suspicions may be justified comes from his father’s housekeeper’s dog. The dog had been missing for a week. Finally someone answers the advertisement that Jack Kerry had placed in the newspaper. Jack goes to collect the dog and that’s when things begin to get puzzling. 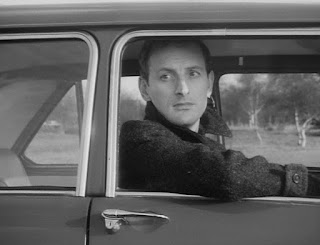 And this is when Durbridge’s plot really starts to throw some delightfully odd twists and turns at the viewer. A freak golfing accident, a blonde in a car, a collection of photographs, a missing dog, a missing dog collar, a man in a wheelchair and a small donation to a charity - how on earth can so many odd little details possibly be connected? Nonetheless Inspector Jack Kerry is convinced they are connected. And all this is just in the first half-hour episode!

With his experience writing for radio Durbridge understood the serial format very well. Each episode has to have a cliffhanger ending and he does a fine job in providing them.

I was pretty confident I knew the identity of the chief bad guy very early on but I turned out to be totally wrong. Beware of red herrings!

Jack Kerry is actually on leave at the time of his father’s death so the investigating officer is Detective Inspector Ed Royce (David Burke). Jack is draw into the case anyway and his relationship with Ed Royce becomes slightly uneasy as he starts to feel that Ed doesn’t believe him. Jack’s relationship with his boss, Chief Superintendent Bromford (Conrad Phillips), is even more uneasy since some of Jack’s actions could be, and are, misinterpreted. 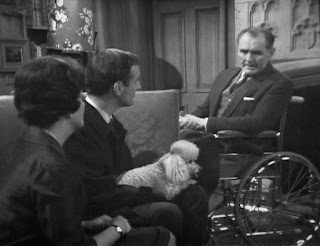 Jack is going to need some help from the blonde in the car mentioned earlier, Kathy White (June Barry), but the difficulty is that he can’t be sure how far he can trust her and she can’t be sure how much she trusts him. The man in the wheelchair is a problem too, as is his wife, as is the pet shop owner who sold the mysterious vanishing dog collar, and then there’s the man who accidently killed Jack’s father in that golfing accident. Not to mention his housekeeper and her very smooth nephew, and even the mild-mannered manager of Jack’s father’s sporting goods store. Any one of these people could be mixed up in the conspiracy and Jack doesn’t even know the nature of the conspiracy.

It’s 1966 so naturally it’s all very studio-bound but it’s a story that relies on good writing and acting rather than spectacle so that’s not a problem.

The late 60s was a period of transition for British television crime dramas, with a move away from the dedicated and loveable bobbies of Dixon of Dock Green towards a harder-edged more self-consciously realistic style that in the 70s would eventually lead to The Sweeney. A Game of Murder marks an early stage in this transition. There are hints of the seamy underside of life but it’s still relatively genteel (very genteel indeed compared to The Sweeney) and there’s no graphic violence whatsoever. There’s also just about no action. Durbridge was still content to rely on the classic techniques of the mystery/suspense story and he happened to be very adept at those techniques.

Danann have released A Game of Murder on an all-region DVD in the UK but it’s rather pricey. Much much better value is the Australian Region 4 release from Madman - their Francis Durbridge Presents Volume 1 boxed set is substantially cheaper and includes A Game of Murder and three other serials. The transfer is also slightly better on Madman’s Region 4 release.

A Game of Murder is a fine old-fashioned mystery tale and it’s thoroughly enjoyable. Highly recommended.

You might also be interested in my review of the 1975 Francis Durbridge Presents serial The Doll.
Posted by dfordoom at 00:02