Mogul, AKA The Troubleshooters (1965) 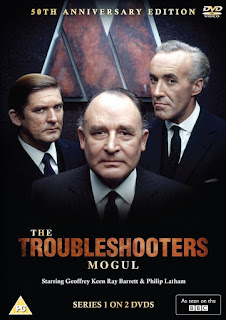 The Troubleshooters was one of the BBC’s more successful drama series, running from 1965 to 1972. The first season was in fact entitled Mogul. It was moderately successful but it was decided to make some drastic changes for the second season which was also given the slightly more exciting title The Troubleshooters.

The series deals with the Mogul oil company, a large concern with international interests. The oil business is not for the faint-hearted and Mogul conducts its business efficiently but rather ruthlessly. Managing director Brian Stead (Geoffrey Keen) is determined and very competent, with somewhat flexible ethics.

There is virtually no limit to the number of things that can go wrong in this business and it’s up to troubleshooters like Peter Thornton (Ray Barrett) to sort out these problems, wherever in the world they may occur.

Only five of the thirteen first season episodes survive.

The very first episode, Kelly’s Eye, does survive. Information has leaked to the press about the progress being made at one of Mogul’s exploration platforms in the North Sea. The company regards this very seriously indeed. Any information gained in the process of oil exploration has been gained at considerable expense to the company and even information of a negative nature could give Mogul an advantage over its rivals. As a result the company goes to great lengths to ensure that leaks of information from drilling crews just don’t happen. Every member of every drilling crew has to sign a confidentiality agreement before being employed. But now a leak has occurred and it’s up to the company’s top troubleshooter, Peter Thornton (Ray Barrett), to find out how this information got out. 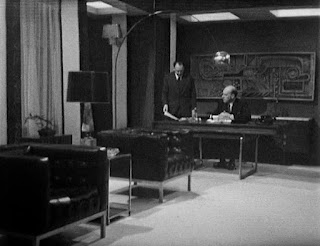 It’s almost like a private eye story, as Thornton not only has to interview every member of the crew he has to do quite a lot of detective work as well. An excellent episode.

Young Turk takes place in a small sheikhdom in the Middle East where Mogul are seeking oil exploration rights. Things haven’t gone too well. In fact a Mogul employee has been killed. Young Bob Driscoll (Barry Foster) is sent out to take charge of the negotiating team. The negotiations will be delicate and Driscoll is not the most subtle man in the world. Have Mogul made an error of judgment here? Another fine episode.

Tosh and Nora is an odd episode, more a kitchen sink drama kind of story, about an ageing seamen on one of Mogul’s oil tankers. Tosh Brinkwater has never been much of a seaman and he’s never been much of a husband to Nora. I suppose we’re expected to regard him as a loveable rogue but he’s actually a rather unpleasant old fool, the sort of person who is too stupid and too stubborn to realise that people are trying to do him a favour. The only positive thing about his episode is that we get to see another, slightly more human, side to Brian Stead. This is really a very dull episode.

Out of Range involves a geological survey in the Sahara. This is the first time in the desert for young geologist David Izard, the son of company secretary Willy Izard (Philip Latham). The head of the survey team, Chris Darnley (Percy Herbert), goes to extraordinary lengths to explain the hazards of the desert, and the rules that have to be followed if you wish to stay alive in such an environment. Of course trying to persuade a young Oxford graduate to listen to good advice was always likely to be a futile task. Meanwhile Peter Thornton has decided the whole survey is a waste of time anyway and the party is called back. They’ll be back at the coast in a day - surely nothing can go wrong now? This is a truly excellent story. 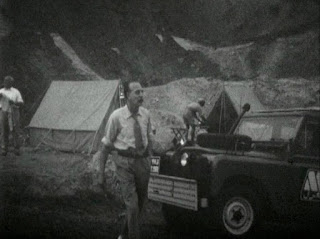 Stoneface takes place in the icy wastes of northern Canada. Bob Driscoll has been despatched to interview Mojida, an Iroquois working for Mogulo as an oil exploration rig boss. Mogul has been considering promoting him to the ranks of their troubleshooters and Driscoll’s job is to make sure he’d be capable of handling the pressures of the job. As it happens disaster is threatening to strike the oil exploration rig and there are serious tensions between Mojida and his French-Canadian number two man Godin. They’re both very competent but Godin believes in taking risks while Mojida believes in playing it safe. It’s a good episode with a dramatic action finale.

This series doesn’t quite fit into conventional genre categories. It borrows from the action adventure genre but there are boardroom struggles, there’s international intrigue, and there’s human drama. In this first season it’s obvious that the intention was to focus not just on the glamour and excitement of the oil industry but to show the human faces of some of the ordinary Mogul employees as well. It’s years since I’ve seen any of the episodes from the later seasons so I can’t really comment on the extent of the format change after season one, although I suspect that it was probably felt that a greater focus on the glamour and excitement would be desirable. 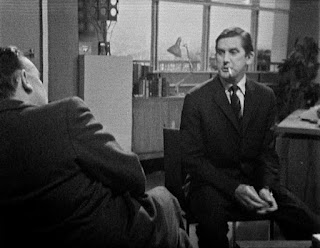 Unusually for a BBC series Mogul isn’t overly heavy-handed in its treatment of the political aspects of the oil business. Mogul is a company competing in a cut-throat business and they play the game hard but they’re not depicted as being evil incarnate. Brian Stead’s ethics may be somewhat flexible but he’s not a crook and although he can be a hard man he’s no monster. Willy Izard is a company man who has devoted his life to Mogul but while he’s paid a price for this he’s not portrayed as being stupid or wrong. He’s made his choices and he’s prepared to live with them.

Peter Thornton’s job sometimes involves stepping on people’s toes and he accepts that but he isn’t a man to throw his weight around just for the sake of it. He can be tough but he can be conciliatory as well. At times Bob Driscoll’s job can involve deception and while he is prepared to do what is necessary he doesn’t always enjoy it (just as Peter Thornton doesn’t always enjoy having to make tough decisions). In other words all the characters have some depth and nuance to them. They’re not heroes but they’re not evil capitalist lackeys, they’re just realists who accept the world as it is.

It’s tragic that only five episodes of this first season survive - it’s not quite enough to get more than a vague impression of what the series set out to achieve. It’s to be hoped that this DVD release will be successful enough to lead to a DVD release for the fifteen surviving episodes of season two. Danann’s Region 2 release of the first season boasts transfers that are quite acceptable. Some episodes are in better shape than others but we’re lucky that any of them survive in any form.

Mogul is fine television. Highly recommended.
Posted by dfordoom at 02:59