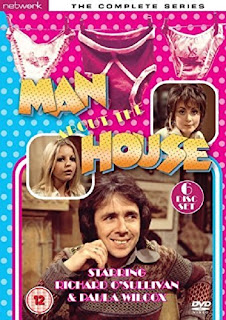 Man About the House was one of the most popular British comedy series of the 70s. It ran for six seasons from 1973 to 1976. It was so successful that a (very inferior) American clone was produced. It’s the sort of comedy that only the British seemed to be able to pull off - risque without being crass and good-natured but with enough bite to avoid blandness.

The premise is simple. Two girls sharing a flat in London are looking for a third girl to share, but instead of a girl they end up with apprentice chef Robin Tripp who is very much a man. In 1973 the idea of men and women sharing a flat together without sharing a bed was still quite daring and it gave the series a very contemporary feel with enormous potential for sexual humour.

The series succeeds because writers Johnnie Mortimer and Brian Cooke resisted the temptation to rely entirely on sexual humour (although there is plenty of that) and concentrated on making it funny. They also very wisely did not push things too far. It’s risque but it’s never grubby.

Richard O’Sullivan was probably the biggest star in British television comedy of the 1970s with no less than three hit series to his credit. He strikes just the right balance. Robin is obviously very much aware of the physical charms of his two female flatmates but in his own way he’s a gentleman. He admires but he doesn’t leer. Well, not in an excessively vulgar way.

Paula Wilcox as Chrissy and Sally Thomsett as Jo are equally good. 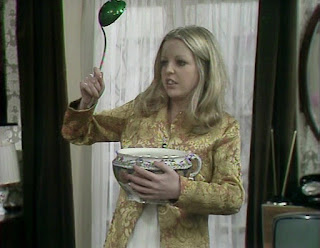 Sally Thomsett had the trickiest role. Jo could easily have been just another dumb blonde but Thomsett makes her slightly eccentric rather than dumb. You get the feeling that Jo isn’t a fool but she just doesn’t quite see the world the way the rest of us see it.

The cast is rounded off by Brian Murphy and Yootha Joyce as the landlords, the obviously inadequate Mr Roper and the obviously sex-starved Mrs Roper. In comedic terms it’s a dream cast - all five regulars are thorough professionals who know how to make the most of the material.

The fact that the two girls are quite lovely doesn’t hurt. What I like is that they’re pretty but they still look like the sorts of women you could conceivably meet in real life, or even (if you were very lucky) imagine sharing a flat with. They don’t look like models.

The sexual tension is provided by Robin and Chrissy. It’s clear that Robin would very much like to get Chrissy into bed. She’s obviously somewhat attracted to him as well, but she’s not sure if he’s really Mr Right and she doesn’t want to get involved unless and until she is sure. This is always a good formula for a television series, the “will they or won’t they” dynamic. In this case it not only provides laughs but also some genuine emotional interest. We like these two characters so naturally we’d like to see them get together. 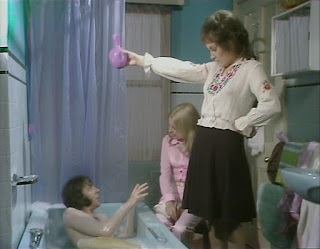 In fact we like all three flatmates and the fact that they are three people who are genuinely fond of one another helps to keep the humour good-natured. We laugh with the characters rather than at them.

Comedy relies a good deal on misunderstandings and this series uses these classic comedic techniques to good effect, as in the episode in which Chrissy is alarmed when she is convinced that Robin is going to try to seduce her and then gets mortally offended when he doesn’t.

Man About the House is startlingly and amusingly politically incorrect. Some of the lines in the series would get a writer lynched today. Over-sensitive modern audiences would have apoplexy at some of the jokes.

On the other hand there’s a certain refreshing innocence to the series. There’s an assumption that it’s quite reasonable for people not to jump into bed with every attractive member of the opposite sex. In that respect it was perhaps just a little behind the times but it’s an attitude that adds to the charm of the series. 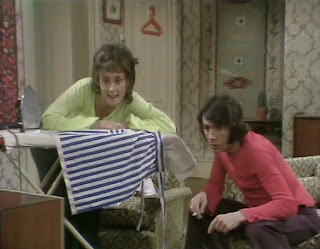 Man About the House spawned two spin-off series, George and Mildred (which was a gigantic hit) and Robin’s Nest (which was moderately successful) which followed the further fortunes of Robin Tripp as a restaurateur.

This was the kind of sitcom that by the 1990s with the emergence of the so-called “new comedy” would be reviled as hopelessly old-fashioned. In fact it’s a good deal funnier than most of the new-style comedy, and it's also a good deal less mean-spirited.

Network have released the complete series (all six seasons) in a DVD boxed set. The transfers are pretty good.

While sex does provide much of the humour this is not Benny Hill-style grubby schoolboy humour. It’s also a long way from the cringe-inducing sex comedies that the British film industry was cranking out at the time. This is closer to classic old-school farce.  There was still a limit to what you could get away with on television in 1973 and the series is a good example of why it’s an advantage to have to work within limits. The writers have to work much harder and they have to rely on genuine wit. It’s also a product of an age when comedy writers did not have to live in terror of offending somebody.

Man About the House really is very funny. Highly recommended.
Posted by dfordoom at 18:03