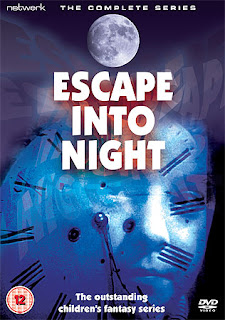 Escape Into Night is a 1972 children’s fantasy/horror TV mini-series from Britain’s ITV. It has an interesting premise and it’s quite atmospheric, and decidedly spooky.

It was scripted by Ruth Boswell from a novel by Catherine Storr.

Escape Into Night was shot in colour but only a black-and-white version has survived. Since there’s a definite touch of horror to the series that’s perhaps not entirely a disadvantage. The very studio-bound feel also adds to the stifling and menacing atmosphere.

Marianne is a young girl who has a riding accident. She’s not badly hurt but she is confined to bed for several weeks. She amuses herself by drawing a picture of a house. When she goes to sleep she finds herself in the house in her dream. When she wakes up she draws a boy in the window of the house. Next time she sleeps she’s back in the house, and there’s a boy there, in the upstairs room she drew him. He’s ill and can’t walk.

When Marianne adds other details to her drawing they appear in the house in her dream. Unfortunately, in a fit of pique, Marianne draws some stones with eyes. They appear in the dream as well, and they don’t seem to be any too friendly. In fact Marianne and Mark, in her dream, start to feel that they should make plans to escape from the house. This won’t be easy, given that Mark cannot walk at all. 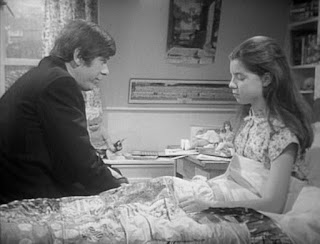 Are Marianne and Mark somehow sharing a dream? Is it really just a dream? Are the two children in actual danger? Is something supernatural or paranormal going on? Why is it that the only drawings that seem to affect the dreams are those done on a particular sketch pad using a particular pencil, a pencil belonging to an art set that had belonged to Marianne’s grandmother. And why is it that every time Marianne sleeps she finds herself back in the same dream?

One of the themes of the series seems to be the way children experience guilt about apparently trivial incidents. Marianne’s annoyance with Mark caused her to draw the stones with eyes and now those stones seem to have a malevolent intent towards Mark. Marianne  of course had no intention of hurting Mark. It was just one of those bursts of childish anger but children can easily be persuaded that they have caused harm to those around them and can end up thinking they are responsible for all kinds of harm. Mark becomes very ill so there is also the issue of how children deal with death and with loss.

Marianne’s father is an engineer and he is out of the country most of the time so Marianne is left without a father figure. Perhaps the dream has something to do with that? 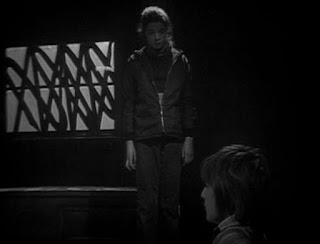 Marianne is still too young to take a romantic interest in boys but she is approaching the age at which boys will start to become rather interesting. Her odd friendship with Mark is completely innocent but it is a step towards learning to deal with that frightening phenomenon known as the opposite sex. Marianne at times seems to have an almost motherly feeling for the helpless Mark. Independence versus dependency, and the natural human need to want someone who needs us, are other issues that are addressed.

The series was presumably aimed mostly at girls but there’s enough subtle horror to appeal to boys as well, or to adults.

In a program like this the casting of the lead actress is crucial, especially in the case of a child actress. Marianne has to be a fairly ordinary sort of girl and like any normal girl approaching puberty she can be exasperating but somehow the actress has to avoid making her irritating to the viewer, or excessively precocious. At the same time she has to be lively enough, likeable enough and clever enough for girlish viewers to identify with. Young Vikki Chambers does a superb job. 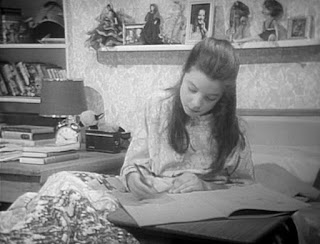 These were innocent days, when a girl would have on her bookshelf a book like The Young Girl’s Guide to Housekeeping. These were also the days when kids still learnt Latin at school.

Given the subject matter, dreams, the big worry was that they’d make a mess of the ending but in fact it works quite well.

The special effects are about what you'd expect from a fairly low-budget children's production but the writing, acting and atmosphere and enough to carry it off pretty effectively.

Network’s DVD release is on a single disc. It’s barebones but the transfer is quite good given the not entirely satisfactory nature of the surviving source material.

Escape Into Night is an intriguing mix of childhood drama, fantasy and gothic horror and it makes thoroughly entertaining viewing. Highly recommended.
Posted by dfordoom at 03:19