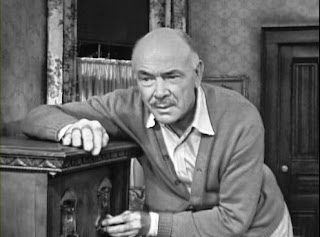 First up is Static, the twentieth episode of the second season. This was one of six episodes shot on videotape as a cost-cutting measure (The Twilight Zone had turned out to be a very expensive series to make and CBS were getting a little anxious about the budgets). As might have been anticipated the results were very poor and these episodes looked cheap and somewhat tawdry compared to those shot on film. Since the cost savings were minimal anyway the experiment was quickly abandoned.

Ed Lindsay (Dean Jagger) is a crusty bachelor who lives in a boarding house. Ed doesn’t have much time for the modern world and he hates television which is unfortunate because all the other boarders watch TV incessantly. Ed thinks television is moronic and he thinks that people who watch TV are moronic and he broadcasts these opinions rather freely. Finally Ed snaps and heads off to the basement to look for his old radio - a huge and very impressive 1930s console model. He brings the radio up to his room and he’s pleasantly surprised to find that it still works. And the programs are wonderful. Who wants to watch TV when you can listen to Tommy Dorsey and his Orchestra live on the radio?

The other boarders are quick to point out that this isn’t possible - Tommy Dorsey has been dead for years. Ed insists that it really is Tommy Dorsey live and further insists that he will prove it if they come up to his room to listen. When they get there there’s nothing on the radio but static. It seems that no-one but Ed can hear these programs. 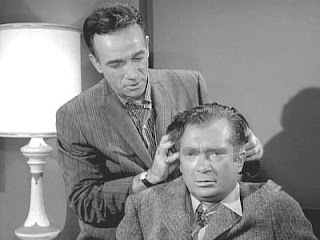 It’s not a very promising premise and sadly it plays out in a very predictable fashion. This was no an original Beaumont script - he adapted it from a story by Oceo Ritch, which might explain why it’s well below his usual standard. Fine performances by Dean Jagger, and by Robert Emhardt as Ed’s friend Professor Ackerkman and Carmen Matthews as Ed’s old girlfriend Vinnie, are the main saving graces here.

Static takes place almost entirely in a couple of rooms in the boarding house. This was obviously very convenient for shooting on videotape but it does have the unfortunate effect of making this episode look even cheaper.

As Buzz Kulik, who directed Static, admits in the accompanying interview on the Blu-Ray disc, the trouble is that it just doesn’t feel like a Twilight Zone episode.

Moving on the episode 21 of season two, The Prime Mover, we find ourselves in more authentically Twilight Zone territory. Ace (Dane Clark) and his pal Jimbo (Buddy Ebsen) eke out a living in a crummy diner. Ace is one of the world’s most enthusiastic, and most unlucky, gamblers. Ace just never wins. Not ever. Then one day, quite by accident, he discovers that Jimbo has a rather unusual power. He can move things just by thinking about them. He can move any kind of object. It has never occurred to Jimbo that his telekinetic powers might be useful. Ace can see a very good use for them straight away. Jimbo could use his powers to move things like dice. Or roulette wheels. Ace, with a bit of help from Jimbo, can now transform himself from a gambler who never wins into a gambler who never loses. Of course, this being The Twilight Zone, things don’t turn out quite the way Ace hopes. 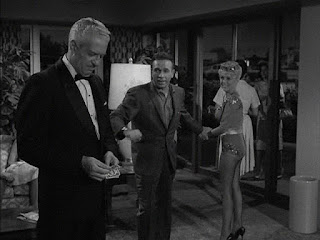 The Prime Mover was originally written by George Clayton Johnson. Charles Beaumont rewrote the script and sold it to the producers on the understanding that Johnson would get a screen credit but because of an oversight Johnson did not get the credit.

After seeing the first few minutes of this episode you know how the story is going to unfold and there are no surprises. It’s a typical Twilight Zone morality play. It’s much more interesting as a character study. Both Ace and Jimbo are fairly interesting personalities and Ace in particular has a certain amount of real depth. Superb performances by the very underrated Dane Clark and by Buddy Ebsen are The Prime Mover’s greatest strengths. It’s not an especially memorable episode but it’s OK.

So one rather poor episode and one that’s not too bad. Anthology series are of course inherently uneven so you expect a few disappointments. What these two stories do suggest that Beaumont was a better writer when he stuck to entirely original material.