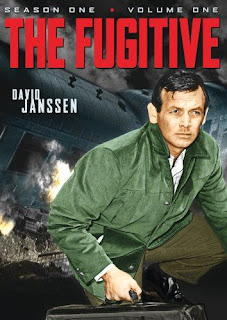 Back in the 1960s if a show began with the words “A Quinn Martin Production” you could be fairly sure you were in for some pretty decent television, with the emphasis on entertainment but entertainment with quality. One of the most successful of these productions was The Fugitive which ran on the American ABC network for four seasons starting in 1963.

The Fugitive was unusual in having a series-long story arc (although this was also the case with another Quinn Martin series, The Invaders). In the case of The Fugitive the ongoing story arc concerns a man on the run, hotly pursued by the police.

Dr Richard Kimble (David Janssen) was on his way to Death Row when a freak railroad accident offered him a chance of escape. Kimble had been convicted of the murder of his wife but he was innocent. His problem was that he could not get the police to accept his story that he had seen a one-armed man fleeing from his house moments after the murder. The police certainly looked for the one-armed man, but to no avail. The jury had no doubts about his guilt.

In pursuit of Kimble is Police Lieutenant Gerard (Barry Morse), the man who had led the initial murder investigation. Gerard is a tough no-nonsense cop,  dedicated and remorseless. He’s honest and he’s not without a sense of fair play but he believes that the law has to be enforced. A man is entitled to a fair trail but if convicted he must pay the penalty. The law might occasionally make mistakes but his job as a cop is to enforce the law to the letter. His boss has a sneaking suspicion that Gerard’s obsession (and it is certainly an obsession) with recapturing Richard Kimble might be an indication that he has some slight doubt about Kimble’s guilt. Perhaps Gerard is trying so hard because he wants to convince himself that on this occasion the law has not made a mistake.

The format of The Fugitive was clever and flexible. Being on the run means that Richard Kimble has to move from town to town, from job to job and from identity to identity. Each episode therefore has a different setting, with different guest characters. The stories are mostly self-contained but the overall story arc is always there, lurking in the background, adding to the tension. 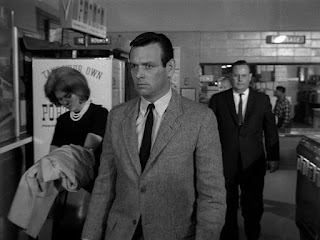 The Fugitive was created by Roy Huggins, a man responsible for a number of very successful and highly influential series including Maverick, The Rockford Files and 77 Sunset Strip.

The Fugitive, partly due to its subject matter but also due to its visual style, has at times some some definite  hints of film noir.

Richard Kimble is a man who is desperately trying to blend into the background, to be as bland and colourless as possible. That’s his only hope of survival. The challenge for David Janssen as an actor was to convey this quality without making the character dull. It has to be said that he doesn’t always succeed. Kimble comes across as being just a bit too passive at times.

The opening episode of season one, Fear in a Desert City, takes place six months after Kimble’s escape. He is working as a bartender in Tucson. He is hoping to attract as little attention as possible but he has inadvertently walked into a situation that is likely to attract a good deal of attention to him, as he tries to help a woman who is being stalked by her deranged and insanely jealous husband. The episode immediately establishes one very important thing about Richard Kimble. Even if it means exposing himself to the danger of discovery he will not walk away from someone in trouble.

The Witch is one of those stories in which every rural person is depicted as either a knuckle-dragging inbred redneck or a gossip-mongering hypocrite. There’s also a little girl who dabbles in witchcraft, and a nasty piece of work she is. She has plans to get even with her enemies and that means anybody who has ever thwarted her in any way. Richard Kimble soon gets added to her enemies list. A weird episode and not an entirely successful one.

The Other Side of the Mountain is a much better story. Kimble stumbles into the wrong town and attracts the attentions of the local sheriff. Pretty soon he is being pursued by helicopters, tracker dogs, a whole posse of sheriff’s deputies, not to mention Lieutenant Gerard. His only hope is a sweet but crazy mountain girl who has her own plans for him - she wants to keep him as a pet! Plenty of excitement in this one as the trap closes remorselessly on poor old Kimble. 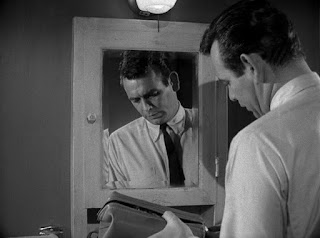 Never Wave Goodbye is a two-parter in which Gerard’s pursuit of Kimble, now working as a sailmaker in Santa Barbara, becomes particularly intense. Gerard believes he is very very close to catching the unfortunate fugitive at last, and in fact he’s even closer than he thinks. Kimble meanwhile thinks he can see two possible ways to escape the pursuit for good. He also manages to fall in love, not the wisest thing to do when you’re on the run. It’s an excellent story with real tension and excitement plus romance and the seaside setting is exploited to the full.

Decision in the Ring sees Kimble working for a prize fighter, as a cut man (the guy who has to attend to any cuts the boxer receives during a fight). This is apparently a very important job and the boxing background is moire interesting than you might expect. Unfortunately this episode is sunk by some terrible writing and by some incredibly tedious and clumsy lecturing to the audience (a practice that was becoming all too common in American television at this time). It’s like trying to sit through one of those awful Hollywood Social Problem movies of the 50s. The contrived ending doesn’t help. This episode is a complete washout I’m afraid.

Smoke Screen is another not terribly good episode. With Kimble and a group of firefighters trapped by a forest fire it should have been exciting, and probably would have been without the action being slowed down in order to deliver more unsubtle messages.

See Hollywood and Die promises some thrills as Kimble and a young woman are taken hostage by a couple of punks who have robbed a gas station. The problem here is that in 1963 if you were going to ask American actors to play juvenile delinquents you would always get pretty much the same identical performances. One of the punks is really stupid and an obvious liability, the other is a bit smarter and the dumb one is pathetically reliant on the less-dumb one. The one-note performances cease to be interesting after the first couple of minutes. Unfortunately the young woman is pretty much a standard type as well. Brenda Vaccaro’s performance is fine but she’s playing a character without any real depth and there’s not a lot she can do.

The plot is fairly predictable as well. It’s more or less up to David Janssen to try to make this story interesting and he almost succeeds. The way in which he tries to outsmart the punks is hardly original but Janssen puts some real thought into his nicely understated performance. Not a great episode but watchable. 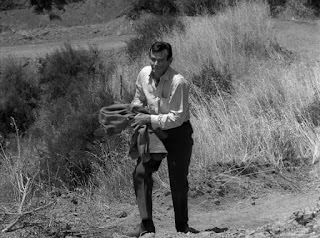 Ticket to Alaska benefits from an interesting setting and a fine script. Richard Kimble is aboard a steamer heading for a lumbering job in Anchorage, Alaska. One of the dozen passengers on board is about to be arrested although they don’t know it. Then a murder occurs. The captain convenes an informal inquiry (which adds a bit of courtroom-style drama). Richard Kimble is going to have to make sure that the killer is identified before the ship reaches Alaska otherwise all the passengers will be handed over to the federal authorities and he’ll be headed back to Death Row. So this is both a murder mystery and a suspense story and these two strands are tied together very skilfully. And there’s a bonus in the form of a couple of quite amusing sub-plots.

A very solid supporting cast headed by Geraldine Brooks also helps. Both the plotting and the characters are equally important and the main focus is on entertainment. A truly excellent episode.

Fatso is not so good. Kimble befriends an amiable overweight drunk who has a secret that explains the mess he’s made of his life. Kimble tries to help him out. I don’t expect every episode in a long-running TV series to be a dazzlingly original story idea but this one is just a bit too predictable.

In Nightmare at Northoak Kimble does something noble and heroic, which could turn out to a fatal mistake. One odd thing about this series is that while Kimble goes to extraordinary lengths to evade pursuit and hide his secret he will suddenly blurt out the whole truth even in situations where it doesn’t seem really necessary. Perhaps this does make some psychological sense. A lonely man on the run always hiding everything about impossible might I suppose feel an urge to tell someone, to try to make an honest human connection. It’s a device that The Fugitive overuses a bit but in this episode it’s put to a relatively interesting use. This is also the first episode in which Lieutenant Gerard is not just a one-note character. Barry Morse is given an opportunity to stretch his acting muscles just a little and he does so with great subtlety but quite effectively. A good episode with a few unexpected twists and it gets bonus points for advancing the overall story arc, adding some depth to the Kimble-Gerard relationship.

Initial impressions after watching the first eleven episodes are that The Fugitive is very uneven. It’s also a series that just can’t seem to decide what it wants to be. Does it want to be an exciting suspense story about a fugitive endeavouring to keep one step ahead of the law, or does it want to be an earnest social drama? It tries to be both, with very mixed success. When the emphasis is one the suspense we get fine episodes like The Other Side of the Mountain and Never Wave Goodbye. When it veers into social drama territory it becomes heavy-handed and dull.

The good episodes are very good indeed. The bad ones are very bad indeed. The Fugitive is so uneven that it’s difficult to give it a recommendation, except perhaps as a rental.
Posted by dfordoom at 00:33