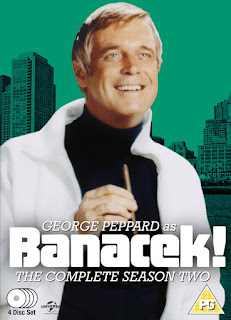 Banacek having been one of the successes of the first year of NBC’s Mystery Movie series it was hardly surprising that a second season of eight episodes followed in late 1973 with George Peppard once again playing the handsome debonair insurance investigator who has a taste for the good things in life, and the money to indulge that taste. It is almost unnecessary to add that Banacek’s idea of the good things of life most certainly includes women.

The format was the same as in the first season with each feature-length episode being an impossible crime story (and usually a pretty good one).

In season two Carlie Kirkland (Christine Belford), who had appeared in the pilot episode, was added to the regular cast, at least for the early part of the season. She’s an insurance investigator as well and it was obviously felt that the sometimes friendly, but mostly antagonistic, rivalry between the two would add some interest. And of course there’s an uneasy romantic tension as well. I’m not sure it was an entirely necessary change but their interplay is quite amusing. She disappears in the later episodes.

Once again Banacek gets invaluable help from his friend Felix Mulholland (Murray Matheson), rare book dealer and expert in all manner of esoteric subjects.

One of the secrets to the success of this series is George Peppard’s ability to make Banacek a character who is both arrogant and genuinely likeable. He’s likeable because the arrogance is done with a twinkle in his eye.

In No Stone Unturned an eleven foot high three ton statue disappears. To get the statue into the museum where it was to go on display required an entire wall to be removed. The wall was then replaced so there was absolutely no way the statue could have been removed from the building. But someone did remove it. 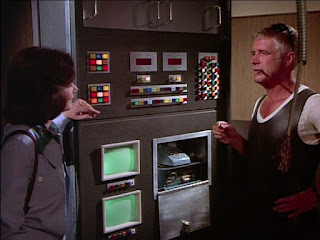 If Max Is So Smart, Why Doesn't He Tell Us Where He Is? concerns the theft of a computer. A brand new high-tech medical computer. And this is 1972, so this computer is the size of a room. A large room. The computer, costing several million dollars, was built with money put up by a wealthy hypochondriac. This is a very good episode.

A three million dollar horse-drawn wedding coach belonging to a Middle Eastern potentate is stolen from a shipping container in The Three Million Dollar Piracy. The coach was being shipped to the Middle East for the ruler’s marriage to movie star Diana Maitland.

In this episode Carlie has become engaged to the very respectable, and very dull, Henry DeWitt and this gives Banacek the opportunity to have a good deal of fun at his expense. This is a particularly pleasing episode that includes everything a Banacek fan could ask for.

The Vanishing Chalice is a valuable ancient Greek artifact that is stolen from a museum. Stolen in public. Stolen right in front of dozens of witnesses. But nobody saw it happen. The solution turns out to be a quite ingenious and satisfactory impossible crime solution.

This episode also sees Carlie manoeuvre herself into the position of being Banacek’s assistant. She claims that she just wants to learn from the master but this being Carlie we’re not surprised that she has another more devious agenda. Carlie is pretty good at manipulating men but she discovers that a girl has to get up pretty early in the morning if she wants to out-manipulate Thomas Banacek. Another fine episode. 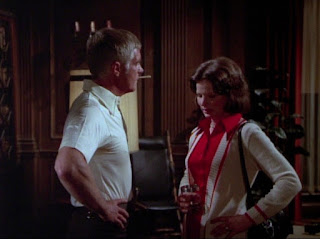 Horse of a Slightly Different Color is pretty good as well. This one was written by Jimmy Sangster, better known for writing scripts for Hammer horror movies.

A racehorse is stolen, in full view of numerous witnesses. This is not just any racehorse. This is Oxford Don, the best racehorse in America, and he’s insured for a cool five million dollars. That means half a million dollars if Banacek can find the horse (his terms are always that he gets ten percent of the insured value of any items he recovers). Oxford Don had been owned by Katherine Wells, the most glamorous racehorse owner in the country. Katherine admires horseflesh but there are other things that interest her more. To be more specific there is one thing she likes more than horses, and that is men. She chooses her men the way she chooses her horses. They need to be thoroughbreds, in the peak of condition, and with lots of stamina. She prefers stayers to sprinters. Anne Francis has plenty of fun with this role and is able to make Katherine both slightly horrifying and rather sympathetic.

Oxford Don wasn’t exactly stolen. He was taken out for trackwork and when he came back he wasn’t Oxford Don any more.

Carlie Kirkland doesn’t appear in this story which is just as well. There are two women involved in this case and Banacek needs to give them both his undivided attention.

In Rocket to Oblivion a new highly advanced rocket engine is stolen from a science and technology expo. There is no way something of that size could be stolen within a few seconds and there was in any case no way of removing something that heavy from its display, given that the electricity was off at the time of the theft. Nonetheless the engine was stolen. The insurance company wants it back. The inventor of the engine wants it back. The Pentagon wants it back. 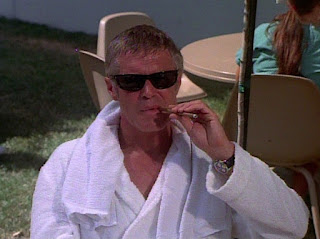 Carlie thinks she can crack this case herself. She was a secret weapon. And anyway Banacek seems to be spending all his time bedding the glamorous organiser of the expo, the deliciously named Cherry Saint-Saëns (Linda Evans).

Fly Me - If You Can Find Me concerns a jet airliner forced to make an emergency landing at a remote airfield in Nevada. The crew spend the night at a motel and when they return to the airfield the next day the aircraft is gone. But there is no way it could have taken off. It was not only in no condition to fly, it would have been impossible to get the plane airborne.

Now You See Me, Now You Don’t involves stage magic, and usually I love movies or TV dealing with this subject. In this case the setup is very good but to me the ending was just a bit too far-fetched.

The second season generally maintains the high standards of season one. Banacek is stylish and witty entertainment with some reasonably clever plots and it has a charismatic star. There’s not much more you can ask for in a television program. Highly recommended.
Posted by dfordoom at 03:27