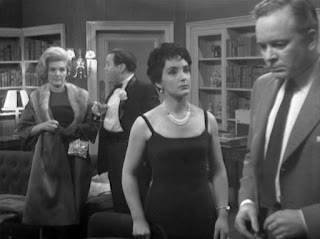 Melissa opens in typically Francis Durbridge fashion. Guy Foster (Tony Britton) is a rather inoffensive journalist now trying to make a living as a novelist. He’s not the sort of man you would expect to be a murder suspect. But that is what has happened to Guy. His problem is that the story he has told to the police has been contradicted, in fairly spectacular fashion, by the evidence of other people. Are these people lying? Is there some kind of conspiracy? Has Guy gone insane? None of it makes sense but the upshot is that to the police he’s looking more and more like a guilty man.

Guy is now in a nightmare world. The police don’t seem to believe anything he says. Nobody seems to believe him. People he has never met claim to know him. A very respectable doctor tells the police that Guy is one of his patients, although Guy has never even heard of the doctor. Any evidence that might support Guy’s story seems to disappear,  or (even more worryingly) appears to have never existed although Guy distinctly remembers seeing these pieces of evidence.

It’s obvious that if Guy wants to clear his name, and avoid being arrested, he’ll have to solve the case himself but he doesn’t know if he can trust anybody since nobody seems to be the person that Guy thought they were. In fact his whole life may not have been what he thought it was, and certainly the reality of his marriage differed from Guy’s perception of it. Did he even know his wife Melissa at all? 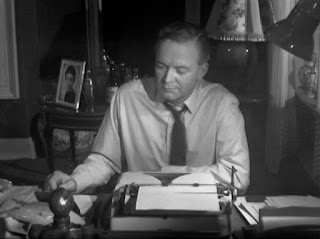 Guy also thought he knew his friends pretty well. Friends like glamorous racing car driver Don Page (Brian McDermott) and Paula and Felix Hepburn (an amiable if slightly dotty middle-aged couple). Now Guy is wondering if he could have been wrong about them as well.

And it’s not just one murder. And the circumstances of the second murder tend to point towards Guy as well. It’s also by no means certain that this second murder will be the last.

Durbridge’s script twists and turns in very satisfying fashion. By the end of the fourth episode I must confess that I still had no inkling whatever of the solution to this mystery. There are six half-hour episodes and Durbridge knows how to make the most of this format, giving us some kind of surprise (or enigmatic) ending for each episode.

The solution to the mystery is quite typical of Durbridge’s work but I won’t say any more for fear of revealing spoilers.

Tony Britton gives a fine performance. It’s mostly understated and even when Guy’s whole world is collapsing around him Britton doesn’t overdo the gradually increasing hysteria because Guy is the sort of man who, if he were going to go mad, would go mad quietly and unobtrusively. 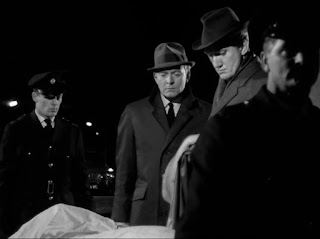 Brian Wilde plays Chief Inspector Carter, who seems rather gentle and quietly spoken for a policeman but perhaps that’s just the impression he likes to give. He finds it difficult to believe Guy’s story but what exactly does the inspector believe? He doesn’t give much away.

This is early 60s BBC television so don’t expect too much in the way of production values. There are a few outdoors scenes but mostly it’s shot in the studio and it is a bit dialogue-heavy at times.

Melissa is one of the four Durbridge serials in Madman’s Australian Region 4 Francis Durbridge Presents Volume 1 DVD boxed set. The set also includes The Desperate People and A Game of Murder (both of which are excellent) and A Man Called Harry Brent (which I haven’t yet watched). The transfers are good (considering that this is early 60s shot-on-videotape British television) and the set is great value.

Melissa is an unassuming but entertaining mystery. Durbridge fans won't want to miss it. If you're not yet a Durbridge fan it's probably as good a place as any to start. His television serials are all pretty consistent and all are enjoyable.
Posted by dfordoom at 04:12