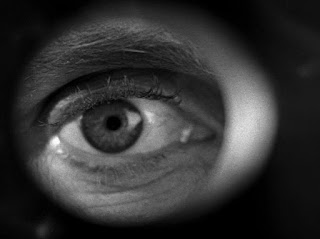 Don't Open Till Doomsday is a fairly generally admired episode from the first season of The Outer Limits. Back in the 1920s a wealthy young couple received an odd wedding gift. It just looks like a fairly ordinary box. If you look inside the box you’ll wish you hadn’t. The groom did look inside the box and that was the end of that marriage.

Thirty years later a young couple elopes. The Justice of the Peace who marries them suggests they might like to stay at Mary Kry’s place. She has a large bridal suite that she’s just started renting out. It sounds like an enticing offer but Mrs Kry’s house turns out to be a gigantic dilapidated wreck of a place, and Mrs Kry herself (played by Miriam Hopkins) is more than a bit disturbing.

Gard Hayden (Buck Taylor) and his bride Vivia (Melinda Plowman) are a bit concerned that Vivia’s dear old dad may be pursuing them and being pursued by Emmett Balfour (John Hoyt) is no joke. He’s a powerful and formidable man, and since Vivia is underage he could cause them a lot of grief.

Still, they are newly married and everything is a romantic adventure and the bridal suite seems like it’s just the place for romance. They’re a nice young couple, hopelessly in love, and we feel that things will probably end up working out for them. If only they don’t look in that deceptively ordinary looking box. It’s not a very big box so it couldn’t possibly contain anything really bad or dangerous, could it? But evil can come in very small packages.

This episode has an extremely gothic feel to it which you don’t really expect from The Outer Limits but it works extremely well, adding to the sense of not just horror but of weirdness. It’s a weird story and it’s an appropriate combination. 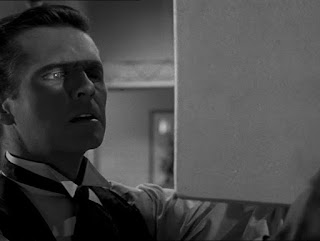 The story itself is quite clever and it has the right touches of real menace. Joseph Stefano was a fine writer and his script hits all the right notes.

The Outer Limits was a series that was always willing to do stories that required effective special effects even though early 60s American network television wasn’t really up to doing elaborate effects in a convincing manner. The Outer Limits was also very willing to show us the monster early and show it often even though that’s usually a bad idea unless your monster is effective enough to allow you to get away with taking such risks. In this episode on the whole the gamble pays off, and in any case the real impact of this story is from the atmosphere of gothic creepiness and the horror of the situation the characters find themselves in rather than from the actual scariness of the monster.

Miriam Hopkins goes outrageously over-the-top and it’s the right approach. The rest of the cast take a much more restrained approach, and that’s the right thing to do as well.

An excellent atmospheric episode with some real chills that come from moral dilemmas rather than straight out monster stuff.

In ZZZZZ the rather studious and dedicated middle-aged entomologist Professor Ben Fields gets a new assistant. Regina (Joanna Frank) is a remarkably beautiful young woman and very very sexy. She doesn’t appear to have any actual qualifications and she has no references but she gets the job anyway, which doesn’t please the professor’s wife Francesca (Marsha Hunt) very much. Francesca is middle-aged and just a little on the dowdy side and for some strange reason she’s a bit suspicious of her husband’s new sex kitten assistant. 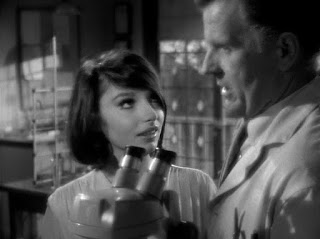 In fact Ben Fields is a happily married man and he has no idea that Regina is likely to cause a problem. She’s such a nice girl and she’s so keen. He genuinely has no desire to sleep with her.

Regina however is very interested indeed in mating. She is not an ordinary young woman. She is not a woman at all (which is giving anything away since we in the audience know this from the beginning). Being an entomologist Ben knows quite a bit about insect mating rituals, but not enough to realise that he’s right slap bang in the middle of one.

The success of this episode depends to a very high degree on Joanna Frank’s performance. She has to be beautiful and very sexy, which she manages with ease. In fact she oozes sex from every pore. She has to be seductive, but not in a crass way. If Ben Fields is going to be tempted he’s the type of man who is most likely to be tempted by a girl who is sexy in a sweet nice girl sort of way. Wide-eyed innocence and all that sort of thing. She has a stunning figure but it’s those big eyes that are likely to get him. Miss Frank however has to do more than this. Given what we know about her true nature she has to have a certain haughty arrogance, the arrogance of supreme power. She also has to have sublime confidence in her beauty. She has to do all this whilst still being sweet and innocent. Not easy but she does it and she does it extremely well. She also needs to have a certain quality of disturbing strangeness. She has to be a beautiful woman and still let us know that she is not human. It’s a superb performance and it’s enough on its own to carry the episode.

This episode has more than this going for it though. It’s a good story. It’s far-fetched but it’s done skilfully enough to allow us to suspend our disbelief successfully. And it has at least some emotional punch.

There are only a couple of brief special effects and while they’re not great they work well enough. I do love the professor’s laboratory. The gadgetry manages to be clever and imaginative while obviously done on a very limited budget.

ZZZZZ is a terrific episode. And you have to love a story with a monster who combines menace with innocence and seductiveness.

Two excellent episodes that serve as a reminder of just how good The Outer Limits could be.
Posted by dfordoom at 23:03