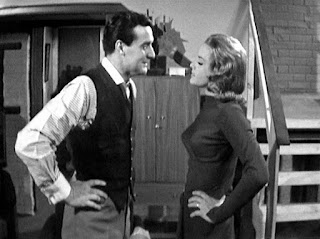 A couple of 1962 Cathy Gale episodes of The Avengers for this post.

Mr Teddy Bear was one of the very early Cathy Gale episodes of the Avengers and was apparently one of Patrick Macnee’s favourites. It was recorded in August 1962, going to air in Britain a month later.

Martin Woodhouse wrote the script. Woodhouse was a doctor by training and he believed that not only would it be desirable to include scientific concepts in his stories, it would be even better if these scientific ideas were plausible.

Woodhouse went on to write a number of episodes featuring both Honor Blackman as Cathy Gale and Julie Stevens as Venus Smith, as well as one of the Diana Rigg episodes (the excellent A Sense of History).

Mr Teddy Bear is a notorious and very successful hitman. He has just masterminded the ingenious murder of a prominent military man, the murder taking place live on television. He is not just a hitman but a bit of a showman as well. One-Ten (Steed’s boss who appeared as a semi-regular character in the early Cathy Gale episodes) has decided that enough is enough. Mr Teddy Bear must be stopped. The plan is to use Steed as bait. Mr Teddy Bear will be hired to kill Steed. This should bring him out into the open. Of course if the plan goes wrong it will be very unfortunate for poor old Steed. 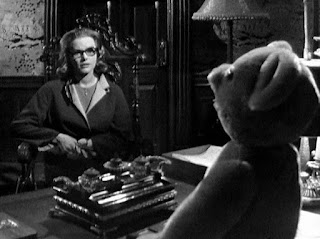 Mr Teddy Bear is no fool and Steed will have some uncomfortably close brushes with death in this adventure. And it builds to an effective and exciting climax.

This episode dates from the days when the series was shot live on videotape, a practice which was certainly limiting when it came to attempting any fancy visual tricks (although the talking bear is a nice touch). Fortunately such tricks are not really necessary if you have a good director working from a good script and, most importantly, if the lead actors have a form grasp of what characters tick and what makes the relationship between them tick. That’s very much the case here. It’s a good story but it’s the characters who make it great television. Patrick Macnee and Honor Blackman had already developed a wonderful chemistry.

This is the early version of Steed, a more cynical and more ruthless operator than the later Steed. There are times when Mrs Gale definitely does not approve of Steed’s cold-bloodedness. That makes the relationship between them rather interesting. There’s flirtatiousness and there’s clearly an element of sexual attraction but there’s a bit of an edge as well. Cathy is a bit cautious about Steed. 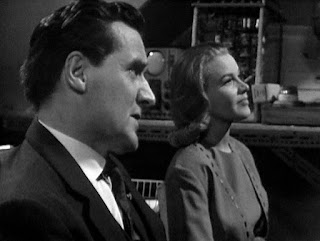 The Mauritius Penny on the other hand has some major problems. It starts promisingly enough, with murder and mayhem in the world of philately. A very rare stamp has come on the market. The trouble is that this stamp is too rare - it just isn’t possible that such a stamp could suddenly turn up out of the blue. One murder in the world of stamp collecting would be odd enough. When Steed and Mrs Gale witness a second murder during a stamp auction it’s obvious they have stumbled onto something big.

Mrs Gale happens to know quite a bit about stamps. Steed unfortunately knows nothing of the subject. The fact that he doesn’t realise that there’s no such thing as a Maltese twopenny blue almost gets him killed.

Had the script stuck to stamps it might have been amusing and offbeat but writers Malcolm Hulke and Terrance Dicks have a different agenda and the script degenerates into heavy-handed political messaging. And it’s neo-Nazis once again. The obsession of television writers in the 60s with this topic was truly excessive and truly embarrassing. It could be made to work quite well if writers treated the subject as an opportunity for outrageous conspiracy theories and silly fun but this story is more like an earnest political lecture, with endless speeches. As the focus switches away from the stamps the fun seems to evaporate.

A very fine guest cast, including Richard Vernon and Alfred Burke, almost saves this one.

This is one episode that does suffer a little from the limitations of the shot-live-on-videotape format. Too much of the episode is focused on a dull political meeting (that seems to go on forever with speech after speech) in a nondescript hall.

So two episodes, one excellent and one not so good.
Posted by dfordoom at 23:02