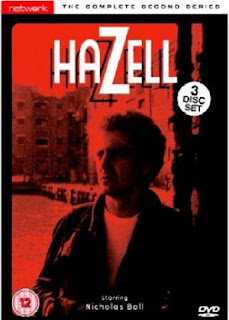 The second season of Hazell is very much in the style of the first but with a few personnel changes. Hazell has come to a parting of the ways with lesbian Dot Wilmington and her detective agency. When he finds his feet again he acquires a sort of assistant in the person of the slightly sleazy Graham Morris (Peter Bourke), a young artist specialising in insects. Mostly Graham just helps to pay the rent on the office and answers the phone but he helps on some cases. It’s not exactly a warm friendship between Hazell and Graham. At best they tolerate each other.

Fortunately the other two regular cast members are still there - Roddy McMillan as Inspector ‘Choc’ Minty and Desmond McNamara as Hazell’s cousin Tel. Hazell’s relationship with Minty is somewhat tense although there are moments of grudging mutual respect, and plenty of opportunities for acidic dialogue exchanges. They might not like each other very much but they are useful to each other. Cousin Tel provides the comic relief, and does so very successfully.

Hazell follows a formula that is very very close to that of The Rockford Files. Both deal with down-market private eyes who have uneasy relationships with the police, both feature heroes with unhappy pasts (Rockford was in prison, Hazell had a drinking problem), both take a tongue-in-cheek approach to the private eye genre, both series are stylish and witty, and both are heavily influenced by the American hardboiled and film noir traditions. Of course there is one very major difference - The Rockford Files is very American (in fact very Californian) and Hazell is very English (in fact very London).

Hazell and the Baker Street Sleuth kicks off season 2. Hazell finds himself working for the very down-market Fitch Bureau of Investigations. Fitch has a reputation for not paying his investigators but Hazell needs the work. Getting paid will be one challenge but there is also a moral dilemma - he has to investigate an unfaithful husband who really doesn’t seem to be unfaithful at all but clients want results and Fitch likes to give them results. 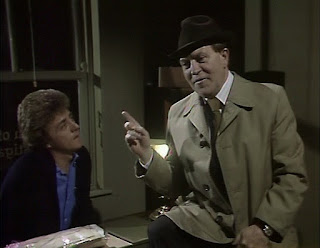 Hazell and the Deptford Virgin is a very amusing and very clever riff on The Maltese Falcon with an assortment of rogues after a statue containing a fabulous treasure in jewels. Charles Gray is in magnificent form as the chief villain, although he’s not quite a conventional villain. He’s ruthless and amoral but he’s more of a loveable rogue. This is a truly splendid episode with Hazell having to outsmart some very clever and very unscrupulous people. Luckily he’s equal to the challenge.

In Hazell Bangs the Drum Hazell is hired by a Dr Patel to investigate what appears to be a case of blackmail. Hazell suspects that an illegal immigration racket may be behind it, but it’s just a theory and really he’s not sure what he’s stumbled upon. He has to take crash course in rock’n’roll drumming to solve this case but he finds some surprising compensations in a laundrette.

Hazell Gets the Boot sees Hazell, much against his better judgment, working for a notorious gangster. The job seems harmless enough. Someone has stolen the gangster’s Bentley and he wants it back. Of course the job isn’t harmless at all. This excellent episode features a delightfully twisted plot.

Hazell is hired by a very attractive young lady in Hazell Gets the Bird. Someone is trying to put this lady out of business. Her business is exotic pets but mostly she deals in taxidermy. Hazell finds himself with a personal stake in this case when he starts sleeping with the lady in question. He’s getting well paid, he’s getting to bed an attractive woman and he’s getting to play the knight rescuing a damsel in distress. So far it’s all good. Except for the birds. The birds are a worry. Hazell discovers that sleeping with clients isn’t always a wise idea, although of course that’s not going to stop him from doing it again. A nicely plotted story and thoroughly enjoyable. 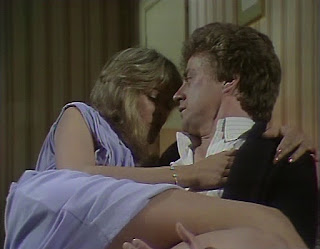 There’s always a tongue-in-cheek element to Hazell. The combination of this with plenty of homages to  the hardboiled style of 1940s private eye movies is a key part of the charm of the series. Hazell and the Big Sleep isn’t so much tongue-in-cheek as pure farce and for me it doesn’t quite work - even though it deals with Chicago gangsters it lacks the essential hardboiled flavour. Hazell is having cash flow problems and an offer of a job helping an old police colleague to catch a hotel thief seems like a lucky break. It’s more like an unlucky break. Everything goes wrong and Hazell is in trouble with just about everybody.

Hazell finds himself in the heart of the countryside in Hazell and the Suffolk Ghost. His client has inherited a cottage but he has no idea why it should have been left to him, plus there have some slightly spooky incidents. Ghosts and witchcraft are not normally in Hazell’s line and dealing with surly villagers who dislike strangers makes things a bit uncomfortable. There are compensations however. The client is overseas but his wife is staying at the cottage and she’s very young, very attractive and has a rather affectionate disposition. In fact she’s very affectionate indeed to Hazell. Bedding a client’s wife might not be strictly ethical but it doesn’t do to get too hung up on ethics.

Hazell and Hyde starts out as a very routine case. Hazell has to find a missing girl who probably doesn’t really want to be found. In fact it’s the beginning of a nightmare for Hazell. Someone is stalking him and it has something to do with the missing girl. A pretty good episode with a few genuinely scary moments. 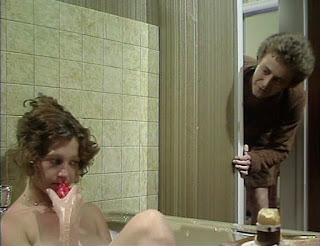 Hazell and the Happy Couple has our dauntless enquiry agent dealing with marital problems. Other people’s marital problems, always a messy business especially when the client has been rather less than honest with him.

Hazell Gets the Part introduces Hazell to the glamorous world of the movie business, which turns out to be rather sordid. He’s looking for a stolen necklace but finds other kinds of villainy afoot. There's also plenty of fun to be had in this story.

The less said about Hazell and the Greasy Gunners the better. A clumsy political message episode.

The series gets back on track with the excellent Hazell and the Public Enemy. Hazell is hired by an old childhood friend. The friend has just broken out of prison but he’s actually in big trouble and he wants to hire Hazell to help him. That’s going to make Hazell unpopular with the law, and with a very nasty big-time gangster. Even worse, the whole scheme has been cooked up by a girl crime reporter and Hazell is quite rightly suspicious of her motives. This is a serious episode with a very definite film noir quality.

Both seasons are available on Region 2 DVD from Network in the UK.
Posted by dfordoom at 07:03