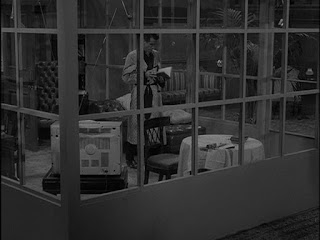 Three episodes of The Twilight Zone for this post, all written by Rod Serling, all from the second season and originally aired in 1961.

While I’m not the biggest fan of The Twilight Zone and while I have definite reservations about Serling’s writing I have to admit that when Serling got it right he could hit it right out of the ball park. The Silence, from season two, is one of his best episodes.

It’s a very unusual episode in that there are no supernatural or science fictional elements whatsoever. There’s no overt horror. In fact it’s a character-driven drama. The one thing that qualifies it as a Twilight Zone episode is the offbeat nature of the central plot device.

Serling later admitted that he had unconsciously borrowed some of the key plot elements from an Anton Chekhov story.

The setting is a gentleman’s club. Jamie Tennyson (Liam Sullivan) is the club bore. He talks incessantly and his conversation consists mostly of empty braggadocio which usually leads up to attempts to borrow money. Tennyson is a young man who has spent all his inheritance and he’s always looking for ways to make easy money. He has a lovely young wife with whom he is madly in love but she has very expensive tastes.

Colonel Archie Taylor (Franchot Tone) offers Tennyson a very easy way to make a great del of money. All he has to do is to shut up. If he can remain absolutely silent for a year Taylor will pay him half a million dollars. It’s not quite so easy as it sounds - Tennyson will be confined in a glassed-in room in the club basement and the room is filled with microphones. If he does speak, even a single word, it will be heard and he will lose the wager. 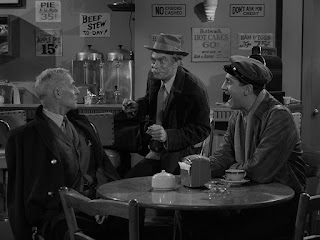 We get hints early on of where the story is heading but while Serling could on occasions be obvious in this tale he keeps some effective surprises up his sleeve.

Franchot Tone had had a glittering career in the golden age of Hollywood but this is actually one of his best moments as an actor. Liam Sullivan is excellent as well. The third major character in the story is Taylor’s lawyer Alfred, played totally straight but very effectively by Jonathan Harris (a far cry from his famous role as Dr Smith in Lost in Space).

Boris Sagal was a very fine television director and although there’s no action and really only two sets he keeps things interesting and he builds the tension rather nicely. He is also prepared to let the actors get on with the job, a wise move since it’s the characters and the relationship between them that is the strength of this story.

Mention must be made of the splendid glassed-in room set which adds a slight touch of Twilight Zone-style paranoid atmosphere.

This is a superb episode in which everything comes together perfectly.

Will the Real Martian Please Stand Up? is also a slightly unusual episode. In some ways it’s more what you expected from The Outer Limits. A UFO has crashed into a lake and a couple of state troopers have arrived to investigate. They find tracks leading from the lake to a nearby diner. In the diner are a group of people, passengers on a bus, who are temporarily stranded due to heavy snow. The problem is that six passengers got onto the bus but now there are seven of them. The state troopers conclude, reasonably enough, that one of them is really an alien from the crashed flying saucer. But which one?

This is a pure science fiction story but it’s done in a light-hearted whimsical style. Serling was not renowned for his ability to write comedy but he does a pretty decent job with this script. 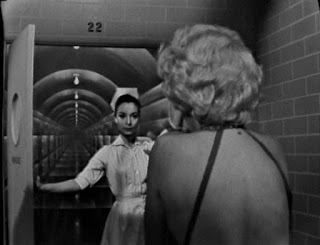 There’s some fairly effective tension as well. The story might be essentially comedic but one of these people is not just a Martian but in all probability a dangerous and malevolent one so we can’t be quite sure whether it’s suddenly going to take a turn into much grimmer territory. A very good episode.

Twenty Two is a good solid supernatural horror story, written by Serling and based on a very famous  E.F. Benson ghost story. Liz Powell is a stripper who has been hospitalised as a result of overwork. All she needs is rest. She has a recurring nightmare in which she ends up in the hospital morgue. Liz has convinced herself that her nightmare is no mere nightmare - that it is real. Her doctor (played by Jonathan Harris) tries to convince her that it really is just a dream but she becomes more and certain that it’s real.

This one establishes the right mood from the start. We know something is very wrong. It’s nothing startling or ground-breaking and the ending isn’t a huge surprise but Serling delivers an effective script nonetheless. The atmosphere of terror is more important than the actual plot. The one fly in the ointment here is that it was made during the period when CBS had insisted on cost-cutting measures and was therefore shot on videotape. This is most unfortunate since the story needs as much help as it can get from the visuals. The hospital sets are good and director Jack Smight knows what he is doing but it doesn’t have quite the creepiness that could have been achieved on film. Barbara Nichols does well as the stripper, making her amusing but genuinely sympathetic - we like her and we don’t want anything terrible to happen to her.

Twenty Two delivers the goods in a fairly impressive fashion.

So three good Rod Serling episodes and they all have one important thing in common. Serling has resisted his natural and all too pervasive urge to us and to bludgeon us with heavy-handed messages, concentrating instead in these three stories on producing well-crafted tales that provide chills and entertainment. The Silence is outstanding but all three are very much worth watching, or (if you’ve seen them before) watching again.
Posted by dfordoom at 01:16