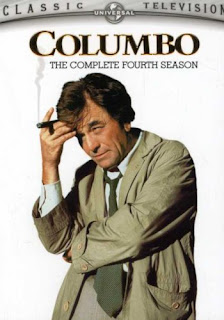 The Columbo formula worked right from the very first episode and the producers wisely stuck to it. Season four is more of the same, which is no problem at all as far as I’m concerned.

An Exercise in Fatality is the season opener. Milo Janus runs a string of health clubs. He sells franchises but once they’ve signed up and paid the franchisees discover that Milo is cheating them.  It’s difficult to prove but one franchisee, Gene Stafford, is getting very close to finding the evidence for fraud. Not surprisingly Mr Stafford meets with a fatal accident. At least it looks like an accident, but Columbo is worried about a few things, especially the scuff marks on the newly waxed floor.

Proving murder in this case isn’t easy since if it was murder it was very well planned. The trouble with well-planned murders is that they’re complicated and those complications are the things that bring the killers undone. There’s the usual battle of wits with Robert Conrad being wonderfully combative as Milo.

The clues are cleverly arranged and as so often it’s Columbo’s knack for noticing tiny details that proves to be crucial. A very good episode. 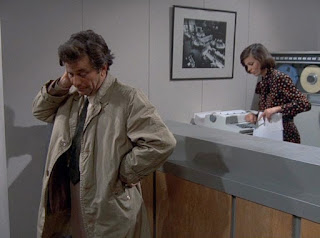 There’s plenty of humour here as well, with the scene in the homeless men’s shelter being particularly good. Larry Storch contributes a wonderful comedic turn as a very nervous and uptight driving examiner whose evidence may be vital.

Dick van Dyke is (to me at least) an oddly colourless villain but that’s the only weakness in this otherwise excellent episode. And he’s by no means bad, just not quite lively enough.

By Dawn's Early Light marks the first of Patrick McGoohan’s four guest-starring appearances in the series and what a bravura performance he gives. He plays Colonel Rumford, the commandant of the Haynes Military Academy. Rumford’s problem is that the latest member of the Haynes family to control the purse-strings, William Haynes, hates him and hates the military academy. William wants to turn the place into a co-ed junior college. Girls running loose in the sacred precincts of the academy! It’s too awful even to contemplate. And of course if the Haynes Military Academy goes then America is doomed to communist takeover. William Haynes has to be stopped and Rumford comes up with one of the more spectacular murder methods you’re likely to see in order to accomplish this.

Rumford’s plan was ingenious. The one flaw in the plan was something he could not foresee.

Everyone at the academy, including the staff, is terrified of Rumford. He’s not just a martinet. He’s clearly fighting a constant battle to maintain some degree of mental stability and he has a Captain Queeg-like obsession with small details. He’s a very unsympathetic character on the whole but perversely this makes him slightly sympathetic to the viewer. As much as we are appalled by him we can’t help feeling sorry for a man fighting a one-man war against the modern world. 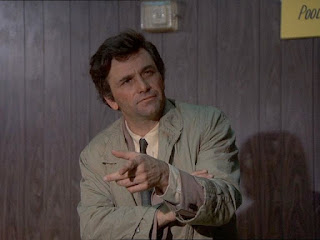 It’s a good episode and worth seeing for McGoohan’s scenery-chewing.

Troubled Waters takes Columbo onto the high seas. He’s on vacation but you won’t be surprised to hear that within a day of leaving port he’s investigating a murder. Used car mogul Hayden Danziger (Robert Vaughn) has to dispose of an inconvenient mistress and he has a plan to frame loser musician Lloyd Harrington (Dean Stockwell) for her murder. The evidence against Harrington seems overwhelming but there’s one tiny clue left behind by the killer that puts Columbo on the right track.

Robert Vaughn is a splendidly smooth villain, just the type of murderer with whom Columbo can engage in the kind of battle of wits that always delighted fans of the series. Jane Greer is excellent as his wife Sylvia, a woman who is unlikely to forgive a straying husband. Dean Stockwell is as creepy as usual. A major highlight for cult TV fans is Patrick Macnee as the ship’s captain, a slightly stiff no-nonsense chap who is not at all happy about murders taking place on his ship. Upsets the passengers you know.

The murder method has a few interesting touches and there’s a fairly clever alibi involved.

Columbo is on the cruise with his wife but of course we never actually see her. Other characters do however see her so at least we know she really does exist!

Add in good performances from the entire cast and you have fine entertainment.

All in all the first half of season four is pretty impressive.
Posted by dfordoom at 00:54